It’s hard to imagine that, someday in the future, queues of solemn tourists might file through 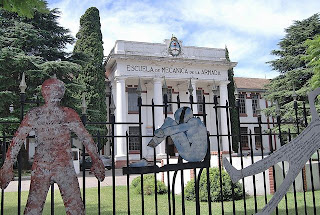 Abu Ghraib and Guantánamo. Thirty years ago, though, it would have been equally unthinkable to suggest that, in 2010, groups of Argentine and foreign visitors would stroll the grounds and halls of Buenos Aires’s Escuela de Mecánica de la Armada, the naval mechanics’ school that was the most notorious clandestine torture center during the military dictatorship that ruled here from 1976 to 1983.

Today, the ESMA - a cluster of handsome buildings with neoclassical touches on a wooded campus in the northern city barrio of Núñez - is the main physical site of Memoria Abierta (Open Memory, link in English), an organization dedicated to preserving the grim history of state terrorism. Touring it, as I did Monday morning, is a draining experience - but not in the way it was for the more than 5,000 “desaparecidos” (disappeared persons) incarcerated, abused, and (mostly) executed here or pushed from helicopters (alive but drugged) into the Río de la Plata.

Before his term expired in 1999, President Carlos Menem - himself a victim of the repression, though he later pardoned his junta jailers - relocated the institution to Puerto Belgrano, near the city of Bahía Blanca in southern Buenos Aires province. At the same time, he ordered the ESMA's demolition and its replacement by a dubious "monument to national unity." In the end, public outcry prevented the ESMA’s destruction.

Menem's decrees infuriated human rights groups and city officials, who saw the former ESMA as the most gruesomely suitable location for a facility that would preserve and present documentary records, oral histories, sound, film, and photographs of the period. In early 2005, then President Néstor Kirchner and Buenos Aires mayor Aníbal Ibarra announced agreement to move remaining naval educational facilities elsewhere and open the ESMA grounds to visits. 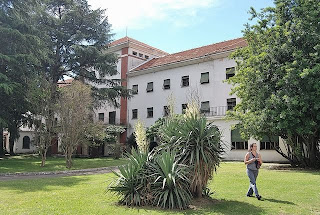 where most of the torture and other abuses took place. Astonishingly, even as torture took place in its basement and guards shoved shackled and hooded prisoners up and down the stairs - the poorly insulated third floor and the attic were areas of coffin-like confinement - officers lunched in the café and even slept in the second-floor hotel rooms.

In a extraordinary instance of Orwellian linguistics, the military’s human rights abusers dubbed the basement corridor that led to the torture chambers the Avenida de la Felicidad (“Avenue of Happiness’). Meanwhile, parts of the third floor became impromptu maternity wards for female prisoners whose babies eventually went as adoptees to military families and civilian collaborators (in total, about 500 children were born in captivity, though not all of them here).

Astonishingly, at the same time, there were acts of resistance even as some detainees appeared to collaborate. ESMA survivor Víctor Basterra, for instance, was a graphic artist who made fake IDs for military kidnappers who used them to claim their supposed relatives’ belongings (which were distributed as booty from a room called “El Pañol”). At the same time, on “conditional liberty,” he smuggled out copies of photos - a truly sinister rogues’ gallery - that later served to identify many of the torturers.

In reality, the three-hour ESMA tour is a mentally draining experience 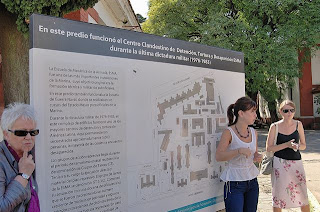 that, although I’m glad I did it, I have no desire to repeat. I can only imagine what stress the guides, who do this several times a week, must go through: though the job requires many of the same skills of any tour guide, it’s a grim task, and jokes and small talk are totally out of order. On request, tours are available in English and, soon, in German. Interior photographs are not permitted.
Posted by Wayne Bernhardson at 5:14 AM

That's great the museum is finally open- it's so important that people understand what happened and have access to a place like this. It makes it so much more real and imaginable, more than just history in words.

And I can imagine the feelings you probably had on the tour- Tuol Sleng in Cambodia made me go out and get steaming drunk at 9.45 in the morning to try to forget what I'd just seen.