According to Martin Turner, owner of Valparaíso’s Yellow House B&B, Chile’s World Heritage Site city is recovering nicely from last February's earthquake: "Things are very slow here … but the city is looking good. At this moment they are painting all the buildings in Calle Serrano [in the portside business district] and it has made such a difference. Loft apartments are starting to appear.” Of course, the quake was not so strongly felt here as it was nearer the epicenter, where the cities of Talca and Concepción saw severe damage and still face major rebuilding.

On the other hand, one of the city’s signature features appears to be at risk - several of its ascensores, the picturesque funiculars that connect the portside flatlands with the steep hills behind them, are faced with closure, and it’s not because of seismic movevments. According to Todd Temkin, president of the non-profit Fundación Valparaíso, “We currently have more elevators out of service than any time during the city's history. The Companía de Ascensores Valparaíso, owner of nine funiculars, has closed six” because, with one major exception, they are not profitable. 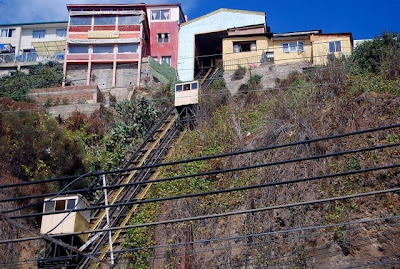 That leaves only four private and three public ascensores in service, from a city that once boasted 33 of them. Not so long ago, a total of 14 were still operating but today, the company’s only functioning lines are Ascensor Concepción (the most profitable of the bunch, providing access to the gentrifying hills of Cerro Concepción and Cerro Alegre), Ascensor Espiritu Santo (pictured above), Ascensor Artillería, and Ascensor Cordillera (open only sporadically). Three municipally operated funiculars remain: Ascensor El Peral (pictured below), Ascensor Polanco (the only true elevator of the bunch), and Ascensor Reina Victoria. 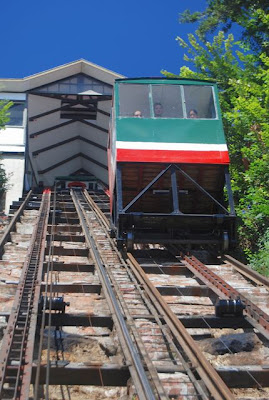 In general, those that continue to operate serve tourists rather than locals. This, says Turner, “is because most locals live farther up the hills. This means that they can catch a bus or colectivo [route taxi] and pay just one fare and get home. If they were to take an ascensor then they would need to look for a bus to get the rest of the way home and the total cost is more.”

Temkin, a U.S.-born poet who is one of the funiculars’ most outspoken supporters, has written extensively about the need to preserve the city’s architectural heritage, of which the ascensores - the oldest of which dates from the 1880s - are a major feature. About a month after he wrote a newspaper column (reproduced here in his blog) advocating that the national government purchase the funiculars, former President Michelle Bachelet agreed to do so, “but she couldn't pull it off before leaving office.”

Shortly after the newly elected Sebastián Piñera took office, though, Temkin received direct assurance that the project is a priority, and he has also been meeting with Piñera’s regional intendente (governor, appointed from Santiago). “I know negotiations are moving forward,” says Temkin, “but the owners are not acting in good faith (in my opinion).” If there’s no progress soon, some of the city’s most endearing features may not disappear, but they’ll certainly be on a shakier basis.
Posted by Wayne Bernhardson at 10:41 AM