About a year ago, I briefly mentioned an improbable new trend toward “Peronist” restaurants in Buenos Aires, and the irony of it all. Recently I stumbled upon an article by Uki Goñi, one of Argentina’s most astute political journalists, explaining in clearer detail than I can, the irony of establishing a restaurant called Perón Perón (photograph by Manuel Massolo) in the so-called “Palermo Hollywood” neighborhood. 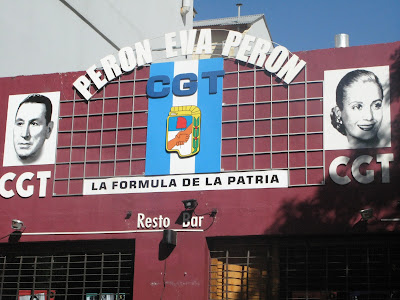 Peronism, historically, is a populist movement built on fealty to the charismatic late General Juan Domingo Perón and his even more charismatic wife Evita. According to Goñi (with whom I have corresponded but have never met), diehard Peronists are outraged at the appropriation of their symbols in a neighborhood that they consider the domain of “gorillas.” That’s a pejorative that the Peronist throngs traditionally apply to anyone opposed to the General and his policies (although Perón was elected president three times, his truly resolute devotees insist on his military title). 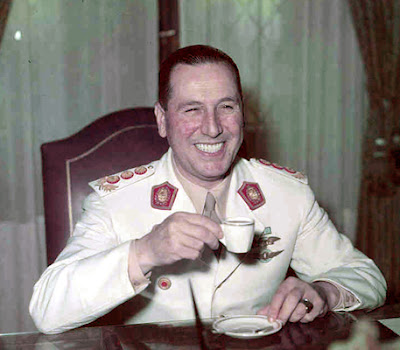 Palermo is not the only “gorilla” neighborhood indulging in Peronist chic. Recently, in the even more upscale Recoleta, my nephew Manuel Massolo took a look at Café con Perón, a thematic bar operated by the Instituto Nacional Juan Domingo Perón de Estudios e Investigaciones Históricas, Sociales y Políticas (yes, that’s the full title, which I cannot finish without taking another breath). Formerly the headquarters of Perón’s aides, the café has a display window full of Peronist souvenirs (photograph below by Manuel Massolo). 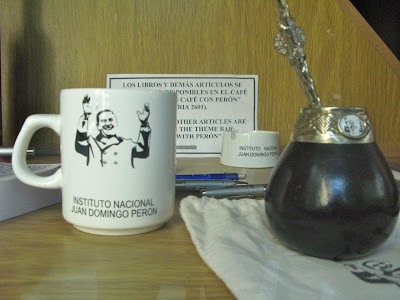 On a Sunday, it was closed, but Manuel met a neighbor who was 15 years old when they demolished the Palacio Unzué (the former presidential palace, across the street) after the so-called “Revolución Libertadora” coup that overthrew Perón in 1955. The Biblioteca Nacional (National Library) now occupies that site; some employees claim to have seen Evita’s ghost roaming the stacks.

Meanwhile, in related news, the current Peronist president Cristina Fernández de Kirchner revealed that she has thyroid cancer and will take a leave of absence from the presidency, shortly after her inauguration for her second term. In announcing her health problems at the Casa Rosada, Cristina spoke with a conspicuous image of the martyred Evita – who died of cervical cancer at the age of 33 - as her backdrop. The symbolism was unmistakable, and suggests that nothing is too over the top for Argentine politics. Evita, of course, owned a luxurious apartment in Recoleta and, despite her limited success as a youthful actress, turned Argentina into her own personal Hollywood until her premature death in 1952.

Addendum
In the "I-couldn't-make-this-up-department," President Hugo Chávez of Venezuela has speculated that the United States has developed cancer-causing technology to use against Latin American leaders. It's true, as Chávez says, that even before Cristina Fernández's announcement, presidents Fernando Lugo of Paraguay, Dilma Rousseff of Brazil (before her election), Lula da Silva of Brazil (after finishing his term) and Chávez himself have come down with cancer. Nevertheless, this stretches the limits of credulity, as only Chávez has really contentious relations with the Colossus of the North, and all of these cancers were very different. I can only guess that Chávez's own unspecified cancer has something to do with his frontal lobes.


Argentina App Update!
As I wrote earlier, my new Sutro Media iPhone app, Argentina Travel Adventures, is now on sale at the iTunes Store for just $2.99. Also suitable for the iPad and iPod Touch, it’s a suitable post-season gift for someone you may have overlooked – at the same time, keep your eye on this space for a possible special announcement. 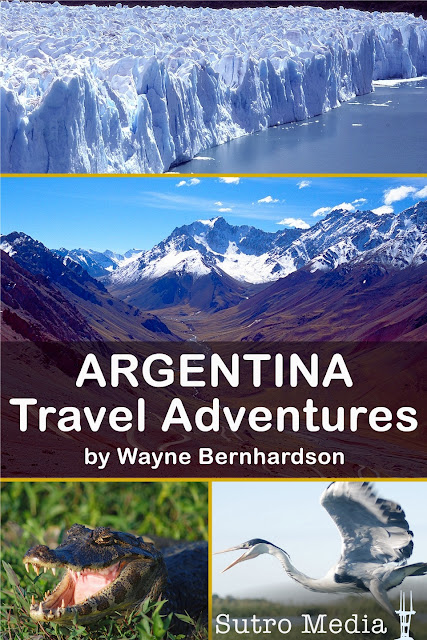 Meanwhile, I am continuing work on a separate app for Chile, which I hope to finish by February.
Posted by Wayne Bernhardson at 12:28 PM