Welcome to Argentina? The "Reciprocity" Conundrum

Nearly thirty years ago, when I first visited Argentina during the "Proceso" military dictatorship, an apparently drunken 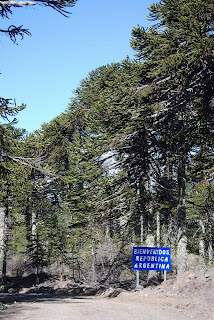 policeman in the Patagonian town of Puerto San Julián insisted in telling me how much he loved Americans. In those days, any such attention from an official figure made you uncomfortable and, as it turned out, the policeman in question was heavily medicated - having literally shot himself in the foot the day before.

Fortunately, Argentina is a stable democracy now, but that doesn’t mean the country doesn’t shoot itself in the foot sometimes. Earlier this week, interior minister Florencio Randazzo announced that the country would institute a “reciprocity fee” - similar to the one collected by neighboring Chile - on foreign tourists whose governments impose visa fees on Argentine citizens. This would mean, for instance, that US citizens entering Argentina would have to pay US$131 per person for the right to enter Argentina, while Canadians would pay even more. Australians and Mexicans will pay correspondingly less.

This is not unfair, of course. Not only do Argentines seeking tourist visas for the US need to pay the said fee, but they also have to provide bank statements and other supporting documentation to prove they have stable employment and resources for their trip, and that they will not overstay their welcome. An applicant from, say, the southern city of Ushuaia will have to fly four hours to Buenos Aires and then back for a perfunctory personal interview at the US consulate. If the visa is not granted, there is no refund. It’s no surprise that Argentines (and other foreigners) resent the expensive, laborious and almost humiliating process, and many of them consider the new measure long overdue.

On the other hand, Argentine tourism operators are up in arms, and rightly so. Their sector has boomed since the 2002 economic collapse made Argentina an affordable destination, but rising international airfares, high domestic inflation, and the deteriorating international economic environment have put their livelihoods - and that of all Argentines directly and indirectly involved in tourism - in peril. Today's Buenos Aires Herald editorializes that the government "now risks discouraging tourism during a global crisis when few enough people feel inclined to travel." The measure, adds the Herald, "is jeopardizing a tourist revenue of potentially billions for the sake of 40 million dollars," the estimated amount of revenue that it would raise.

A US family of four would thus pay more than US$500 additional in “reciprocity fees” for a two-week Argentine holiday, and may well decide to go elsewhere in the current economic crisis. According to Ricardo Roza, president of the Asociación Argentina de Agencias de Viajes y Turismo (Argentine Association of Travel and Tourism Agencies), “In addition to being inconvenient, [the measure] seems dubious and difficult to apply. The world economic crisis is already affecting the arrival of tourists. There’s no reason to impose any more obstacles. In reality, this will limit the country’s foreign exchange earnings.” Another private tourism official added that “This charge is punitive, a very inhospitable measure.”

Originally, it was announced that the measure would take effect on January 1, 2009, but there are rumors it may be postponed until March - which would at least give operators one less worry for the upcoming summer high season. The details are yet unclear as well - who will collect the fees and how? Chile, for instance, collects its reciprocity fee only at Santiago’s international airport, as it’s utterly impractical at some remote border posts, so that overland travelers are de facto exempt. Nor is the Argentine measure’s term of validity clear - in Chile, again, it’s valid for the lifetime of the passport, up to ten years.

Meanwhile, an apparently impulsive government decision threatens to undermine one of the Argentine economy’s most dynamic sectors. It's fair enough to open fire on a threatening enemy, but it's foolish to shoot your ally, and even more foolish to shoot yourself in the foot.
Posted by Wayne Bernhardson at 7:33 AM

The fee will have an even more devastating side effect on tourism on Uruguay, to which the vast majority of international visitors travel via BA on day or short trips to Colonia or Punta del Este. Under the rules of the new "fee", tourists could potentially be charged on arrival in BA as well as for the subsequent return border crossing from Uruguay back to Argentina, making any potential day or short trip to Uruguay very expensive.

My guess is that the fee will not be reimposed for every single border crossing, but it remains to be seen how exactly it will work. If it's similar to the Chilean measure, the bureaucracy is minimal - I paid the fee eight years ago, and cross the border many times every year without encountering any problems.

After the government went after the farmers and lost to the number one sector of the economy exports, it only makes sense to mess with number two, tourism. ¡Que kilombo!

What disappointing news although I can't say that I'm surprised. As livinginpatagonia points out, Argentina hasn't seemed to learn the lesson of "don't mess with success." Thanks for bringing this to our attention, Wayne.

Have you heard of further clarifications on border crossing issue? I'm basing myself in BsAs in 2009 but plan to travel to surrounding countries to visit and to renew my 90 days Arg tourist visa. It's doable but certainly not preferable if I have to pay US$131 every time I cross back into Argentina.

There is an item in today Cronista.com (see http://www.cronista.com/notas/161985-negocian-el-gobierno-evitar-tasas-reciprocidad) that suggests the matter is still up in the air. My guess is that it will resemble the Chilean reciprocity fee, and only be collected at the main international airport but, this being Argentina, it wouldn't surprise me to see something even more foolish.

Thanks for the tip and your very helpful blog. I've one year to live in BsAs and travel around SA. I hope to see you around town.

What part of "reciprocity" don´t you understand?

I understand reciprocity perfectly well, Fernando. As I've said many times, it's not unfair, but in this case it's particularly foolish, given the current economic environment for international travel, and Argentina's remoteness - for better or worse, it puts Argentina at a competitive disadvantage. Is it better for more foreigners to come, and pay for Argentine services, or for fewer to come, earning the government a pittance of revenue?

I intend to write a new blog entry about the topic later this week.

China charges between $130 & $160 for a single visit Visa plus the "processing fees" for a tour company to take the Passport to the Embassy.

South America is not unique in charging fees. "Far" country or otherwise.

Plus, the vast majority of the visitors from Argentina come from Europe, not the USA.

It is true that visitors from the United States and Canada - both countries that will have to pay "reciprocity" fees - are about half the number of visitors from Europe. However, though I do not have the most recent statistics at hand, I believe United States citizens comprise the single most numerous long-distance nationality to visit Argentina, and any reduction in their numbers will have a disproportionate impact on the Argentine travel industry. U.S. visitors tend to be the biggest spenders and, according to my cousin (a tour guide in El Calafate) the biggest tippers. The money to pay the "reciprocity" fee could be coming out of her pocket.

What is the average per-person trip cost (total cost = travel + hotel + any gift purchases + living expenses) ? What percentage of that overall spending does the $131 represent?

I venture to say, less than 5%. Anyone coming down here planning to spend less than $2600 on the trip overall is nuts.

Unless you can answer that, it´s all blah-blah bickering in the air.

Argentina isn´t a low-cost, budget destination. I think the tourists can afford the extra $131.

And as far as I'm concerned if that causes a thousand less backpack-sporting U.S. college kids aka party animals down here, much the better.

It is true that the single traveler does not need to pay much. U$S131 was a very small part of my budget for one year in Argentina. If the fee was active at the time I entered the country, I would have happily paid to enter Argentina.

However, in respect to a family that wants to take a vacation in Argentina, a family of four would be paying a much larger share of their travel budget to satisfy the proposed requirement.

I am not saying it is right or wrong to impose the fee. It is Argentina's sovereign right to do so.

However, the US imposes such a visa application fee. As a result many of my friends from abroad can't or won't visit because of our complex and costly visa application process. I think that is a shame. But I think Wayne is right in saying that certain travelers would not consider Argentina if the reciprocity fee significantly eat into their travel budget. Further, the fees apply not only to those from the United States, but also Canadians, Aussies, etc.

Further - I traveled extensively with my backpack because it allows me to enjoy remote locations in its natural splendor. Am I guilty by association of being a drunken university student on my gap year travel?

I have just written an additional post on the new reciprocity fee, for those who are interested.

Meanwhile, like TCL, I want to speak out in defense of backpackers, far from all of whom are party animals. I myself was one, in the in the late 1970s, and married an Argentine in the 1980s. I expect that Fernando and I might agree that the Bush sisters should stay in Texas, but many backpackers learn a lot on their excursions into Argentina and other countries. Would it be better than they stay home and remain ignorant? They are also likelier to return as adult professionals, and spend more money in this country - and satisfied visitors will spread the word to family and friends.