In Argentina, fútbol (soccer) is the undisputed king of sports, despite shortcomings 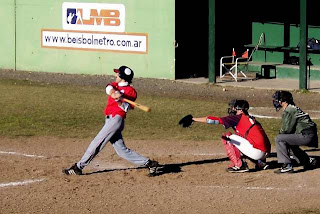 that include its apparent unwillingness to control organized hooligan gangs - in fact, team officials often collaborate with them. Argentine soccer’s most urgent concern, though, is meeting its payroll - unless clubs from the first division down get their act together, the players will not get paid, and the season that’s due to begin August 16th will not start.

That doesn’t mean there aren’t sporting alternatives. If soccer fails to start on time, Argentines will at least have the option of the upcoming béisbol season, when Buenos Aires’s Liga Metropolitana de Béisbol starts play in September. In truth, baseball is far from the phenomenon here that it is in the Spanish-speaking Caribbean - rather, it’s a recreational niche sport. Venezuela is the only South American country where baseball is more important than soccer; even in neighboring Colombia, which has also produced many major leaguers, baseball remains a distant second.

Eight teams comprise the league, which continues play through December, at Ezeiza’s Estadio Nacional de Béisbol, which has hosted the Panamerican Games, near the city’s international airport (former major leaguer Candy Maldonado, now an ESPN Spanish-language broadcaster, has offered baseball clinics to Argentine youth teams here under the auspices of the US embassy). The Liga Metropolitana is a wood bat league - no metal bats allowed.

Six of those teams are exclusively Argentine, while one is Cuban and the other, a recent creation, is the Shankees Baseball Club - composed mostly of US expats. In the past season, they finished second to the Cubans. Philadelphia-born Paul Perry, son of an Argentine mother, manages the team, which adapted its name from the Argentine pronunciation of the word yanqui (Yankee). He supplied the photo that appears here.

On my recent visit, I had hoped to be able to practice and/or play with the Shankees. Sadly, a day of inclement winter weather - following a string of mild, sunny winter days - eliminated that day’s workout. Still, I’ll be back in town in September and hope to see, and perhaps participate in, part of the Shankees’ season.
Posted by Wayne Bernhardson at 9:14 AM

This is great news!!!
It's about time Argentina comes out of its soccer shell.
I hope baseball continues to grow for the sake of all sports lovers.
There's no better team sport than this!
Bye,
Abner

Hi!
In response to Abner;
you are so right.

Baseball combines so many skills.
Though its slow pace seems dull to foreigners, it's fast-speed action requires such ability and quickness. Hitting a baseball well and being able to catch a line drive are no easy tasks; not to mention sliding.

Baseball only appears to be slow paced - there is always a lot going on, but it takes training to be aware of it.