South Atlantic Air: To and Around the Falklands

In 1986-7, I lived for 13 months in the Falkland Islands while researching my PhD dissertation on their historical geography. On Saturday, I returned for the fourth time since then, to spend a week updating their chapter of Moon Handbooks Patagonia. I also traveled to the Islands in 1996, 2004, and 2007.

Saturday morning I struggled out of bed at 4 a.m. to catch the shuttle to Santiago’s Aeropuerto Internacional Arturo Merino Benítez for the three-hour, 7 a.m. flight to the Patagonian city of Punta Arenas. There, after immigration formalities and a crew change in the southern Chilean city, it was onward to the Falklands’ Mount Pleasant International Airport.

The flight from Punta Arenas takes about an hour and 20 minutes, but the Falklands landscape, with its rolling hills and grasslands, often resembles southern Chile and Argentina. It’s a shocking change, though, from the balmy 25° C in Santiago the previous few days - on arrival at Mount Pleasant it was sunny if windy but, by the time I walked out of Stanley’s Rose Bar with my friends Raymond and Nancy Poole around 11 p.m. that night, it was blowing a northerly gale and a sudden storm dampened us by the time we walked the two blocks backs to their house. 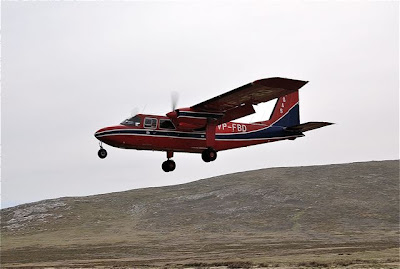 Early Sunday morning, Raymond taxied me to Stanley Airport, where the Falkland Islands Government Air Service (FIGAS) Norman-Britten Islander (pictured above) puddle-jumped me and other passengers to Goose Green, Hill Cove, Saunders Island and my final destination at wildlife-rich Carcass Island. The last time I visited Carcass, six years ago, an unavoidable flight glitch got me there in mid-afternoon and, with my flight out scheduled for early the next morning, I got to see far less than I wanted to. 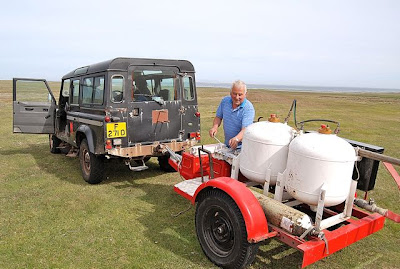 This time, at least, we arrived by mid-morning and, following Rob McGill’s tea-and-cookies welcome (Rob appears in the photograph above, at the airstrip) - Falkland Islanders make a point of filling their guests’ stomachs - I took a walk along the harbor of Port Pattison, stopping to photograph striated and crested caracaras, black and Magellanic oystercatchers, flightless steamer ducks and Patagonian crested ducks, cormorants and snowy sheathbills, as tiny tussac birds flitted among them. 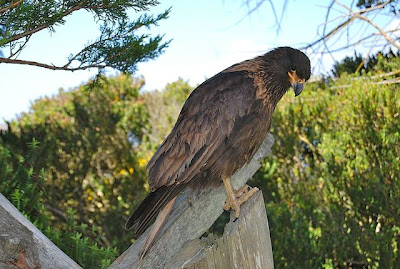 By then, it was time to return to the lodge - a traditional Islands house refitted to accommodate about a dozen overnighters at most - for a lunch of empanadas, quiche and other snacks prepared by Chilean chef Roldán Guzmán, as a dozen striated caracaras (one of which is pictured above) watched us through the picture window. After lunch, Rob taxied me and an English couple in his Land Rover to Carcass’s Northwest Point, where at least a hundred elephant seals (one of which is pictured below) of varying sexes and sizes stretched along the sandy beach beneath the tussac grass. A small colony of skittish southern sea lions scattered toward the water - some distance away during a very low tide. 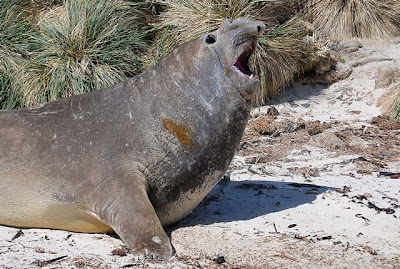 After Rob finished some work on a scientific research station, we returned to the settlement by the high route around Carcass’s east side and the Ovens Rocks, a favorite picnic site with residents and visitors, with views toward Saunders Island. By that time, a young Anglo-Irish couple had arrived by boat from nearby West Point Island, where FIGAS no longer lands except in emergencies because of a substandard airstrip (having once landed at West Point with FIGAS, I can confirm that it’s far more exciting than a rollercoaster).

From West Point, Mike Clarke runs boat charters to the uninhabited Jason Islands for £575 (about US$900, for up to six people), with the possibility of staying overnight on the site of the world’s large black-browed albatross colony at Steeple Jason. He also does day trips and overnights from Carcass.

Getting There - on the Cheap
Unfortunately for intending visitors, getting to the Falklands from either the UK or Chile is expensive but, for those who are already in South America, there’s a little known budget alternative. Ever since LAN Airlines began its flights to the Islands, the Argentine government has required them to stop once per month at Río Gallegos, in exchange for the right to pass over Argentine air space. Relatively few people get on or off at Gallegos but, because of Argentine subsidies, the fare from there to Mount Pleasant and back is only £120 (about US$190); from Punta Arenas, it costs at least twice that.

The problem, of course, is that only one flight per month goes in each direction, so this means planning in advance and staying for either a week or a month - but it’s a great option for those who want a taste of the Islands and might want to return when they have more money. Fares are available through LAN’s website.
Posted by Wayne Bernhardson at 2:06 PM