In two decades of visiting El Calafate, I’ve always written that “the gateway to Parque Nacional Los Glaciares and its spectacular Moreno Glacier…has few points of interest in itself." Rather, it's been the town’s critical mass of services (and the lack of them in the park itself) that made it a destination for travelers from around the South American continent and the world. Even if the hotel building boom has slowed over the past couple years, the tourism economy has helped triple Calafate’s permanent from about 6,000 a decade to around 18,000 today. 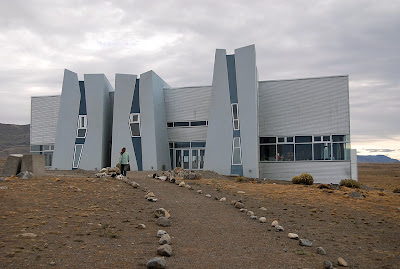 Now, though, the town has that an attraction in its own right. New this month, though not yet officially inaugurated, the Glaciarum is a first-of-its-kind “Museo de Hielo Patagónico,” placing the Patagonian icesheets in natural and historical perspective, in state-of-the-art facilities on a hilltop west of town. Last Tuesday, I was fortunate enough to get a private tour in the company of Glaciarium director Luciano Bernacchi; on February 15th, the anniversary of the date when Patagonian explorer Francisco P. Moreno officially named Lago Argentino, he will host Argentine president Cristina Fernández for the official opening (It’s not often I get priority over high-profile politicians).

Within its walls (shaped to mimic the angular blocks of ice on a glacier’s tongue), the Glaciarium offers sophisticated exhibits on the formation of the Southern Patagonian icefields, their original coverage and present extent, and detailed descriptions on individual glaciers on both the Argentine and Chilean sides of the border. There are also accounts of discovery and research, with special emphasis on “Perito” Moreno - in fact, there’s even a robot of an elderly Moreno at his desk, writing his memoirs with an out-loud narration of his thoughts (Perito means “expert,” an honorific commonly attached to Moreno’s name). Note the photograph of US President Theodore Roosevelt, who toured northern Argentine Patagonia with Moreno, on the back wall. 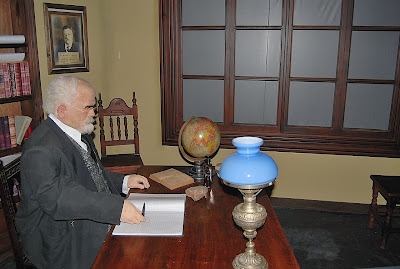 Built with private funds, the museum’s didactic purpose is to promote public consciousness of climate change and environmental deterioration. The consulting glaciologist is Pedro Skvarca of the Instituto Antárctico Argentino; an early mountaineer in the region, he found his life’s calling in the preservation of the massive rivers of ice and the summits that surround them. In addition to the regular exhibits, there is an art space and a 120-seat theater that offers a 3-D tour of the glaciers themselves - certainly worthwhile for those who lack time to visit all of them. The informational panels, and the recorded narrations, are available in both Spanish and English.

On a hilltop several km west of town, the Glaciarium is open 9 a.m. - 9 p.m. daily except Monday, when it’s closed. Admission costs US$17.50 pp, US$12.50 for children age six to 12 - making it perhaps Argentina’s most single expensive museum. Still, in a country where government subsidies are a way of life, it’s refreshing to see private sources ponying up with confidence that the public will make it worth their while.

Besides its exhibits, the Glaciarium has a confitería for snacks and sandwiches, a souvenir shop, and, in the near future, it will add a subterranean ice bar. Given its distance from town, it also offers its own hourly shuttles to and from the site (US$6 pp r/t).
Posted by Wayne Bernhardson at 4:30 AM