Southwest of the regional capital of Coyhaique, Parque Nacional Laguna San Rafael is one of Chile’s largest national parks, where the ice from the Campo de Hielo Norte, the Northern Patagonian Icefield, reaches the sea. I have viewed the jagged seracs of the park’s namesake glacier - the world’s lowest-latitude tidewater glacier - on three separate trips, but I have never actually entered the park. 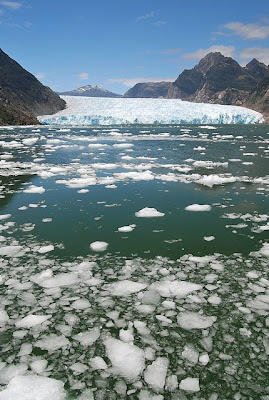 In fact, despite the fact that thousands of visitors view the glacier up close and personal every year, only a handful of them ever enter the park - in 2009, the last year for which complete statistics are available, only 158 persons (82 Chileans and 76 foreigners) actually set foot in it. That’s because the jurisdiction of the Corporación Nacional Forestal (Conaf), which manages the park, ends at water’s edge, and almost everybody arrives on catamarans, cruise ships and ferries that quickly turn around and head back to Puerto Chacabuco, the port from which they sailed. 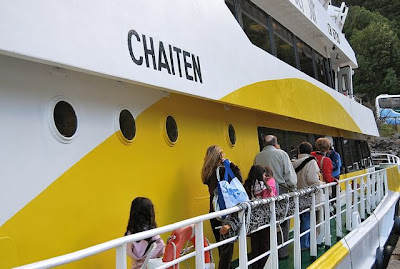 That was my experience again on Wednesday, when Catamaranes del Sur’s high-speed Chaitén sailed from Chacabuco at 8 a.m., arriving at the glacier around 1 p.m. after a couple brief stops to view sea lion colonies en route. Over the next couple hours, the crew shuttled the passengers on Zodiacs along the glacier’s face - not too close, to avoid the crash of melting towers of ice and the waves they create - on a magnificent day that yielded the best views I’ve ever had of the advancing river of ice and its surrounding peaks. 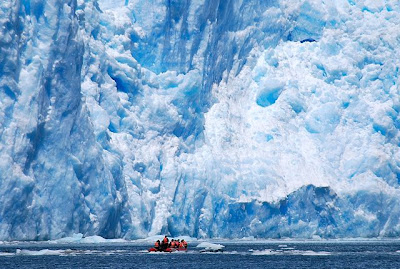 In the course of my Chilean travels, I have also taken the Navimag ferry from Puerto Montt to Puerto Natales at least half a dozen times, and I never cease to marvel that, in a world of six billion people, such an enormous area could be almost unpopulated - human settlements, or any sign of population, are virtually absent in an area that resembles the Alaska Panhandle. Verdant forests rise from the sea to mountains bearing the last of the winter snow, among other peaks of perpetual snow and ice, but they remain largely nameless, to me at least.

In reality, except for the handful who earn their livelihood at sea, this is still the nearly trackless wilderness it was when British naval officer John Byron - grandfather of the famous poet Lord Byron - was shipwrecked here in the 18th century, and when the HMS Beagle, with Darwin and FitzRoy aboard, anchored at Laguna San Rafael in 1835. On one level, the forested hillsides and islands of archipelagic Chile differ little from the barren wastes of the Atacama desert - there is a verdant monotony to them. Yet in the Atacama the evidence of human habitation and activity is present everywhere, while in the lush south it's simply overgrown, if indeed it ever existed. There is no simple way to orient yourself, other than by the cardinal directions - in general, you’re going north or south.

While seeing Laguna San Rafael other than by sea has been difficult, that’s starting to change. A new operator, affiliated with Coyhaique’s Condor Explorer and Puerto Río Tranquilo’s El Puesto, is taking hikers by sea to the park for day trips, and for one- and two-night packages with tent camping. It’s not cheap - about US$180 for the day trip and US$300 for the overnight, not counting transportation to the end of the Río Exploradores valley road - but the price compares favorably to the catamaran and cruise ship excursions.
Posted by Wayne Bernhardson at 11:53 AM

I like your post.Awesome photo’s and awesome location. really a very good article thank you for sharing this with us.