When I first drove the Santa Cruz province segment of Argentina’s Ruta 40, in 1991, it was all gravel. In four days, my wife, a friend and I saw three other vehicles between El Calafate and the town of Perito Moreno. I vaguely recall we bought some gasoline from an estancia just outside Parque Nacional Perito Moreno, but – perhaps naively – we never worried about running out of fuel. 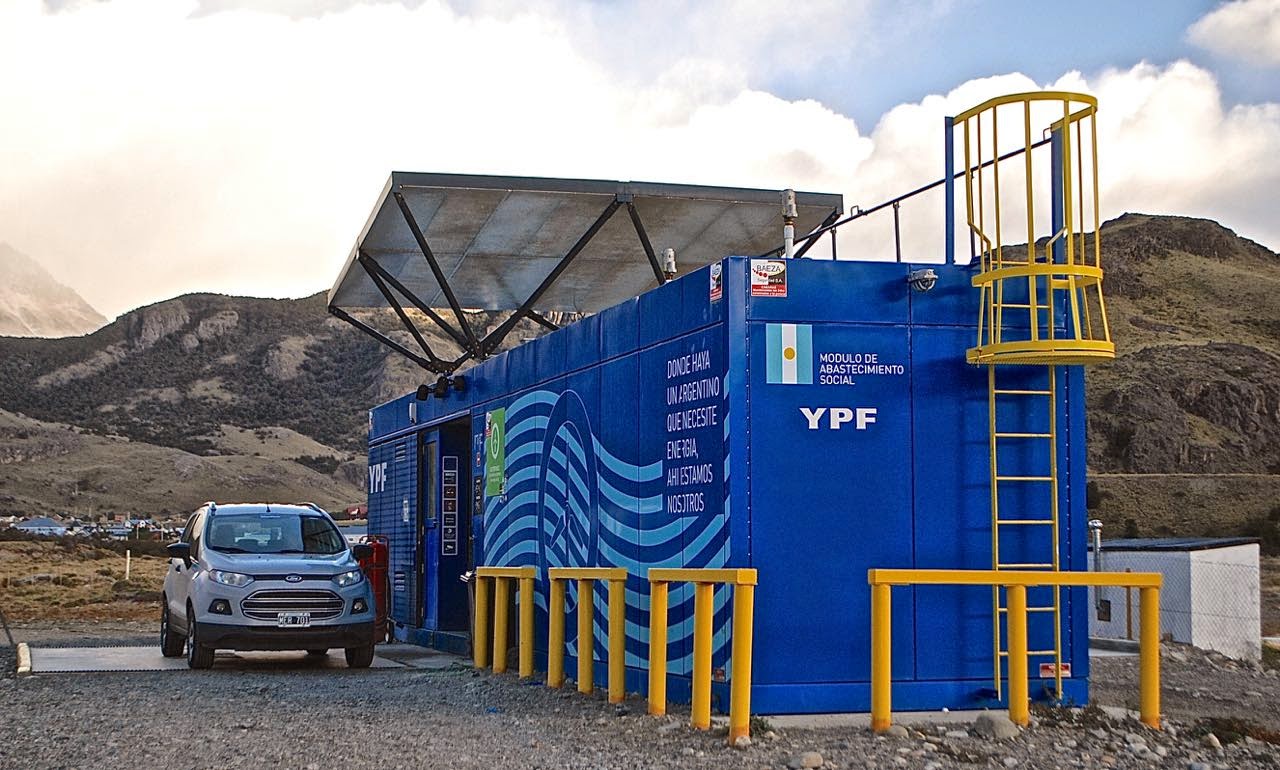 Today this segment of Ruta 40 is almost completely paved and one might expect that, over the ensuing decades, energy infrastructure would be even more reliable. If so, one would be wrong - having driven the route at least another ten times since then, I have always warned drivers to fill the tank at every opportunity and, even then, carry extra fuel.

So what happened when I failed to follow my own advice? Tuesday morning, I left the town of El Chaltén – Argentina’s self-proclaimed “trekking capital” – with the idea of reaching the town of Cochrane, on Chile’s Carretera Austral – that night. My route would resemble the one I drove in 1991, except for the start and finish points, but the distance would still be comparable.

Leaving El Chaltén, I had more than half a tank of gas and a 20-liter can, so I satisfied myself with photographing YPF’s new, solar-powered container station (pictured at top) on the outskirts of town. I figured to fill the tank at Tres Lagos (pictured immediately above, the last supply in 360 km, where I had always found plenty of fuel on previous trips. I should not have done so because, when I got there, the pumps said “no hay nafta” (no gasoline), though there was diesel. 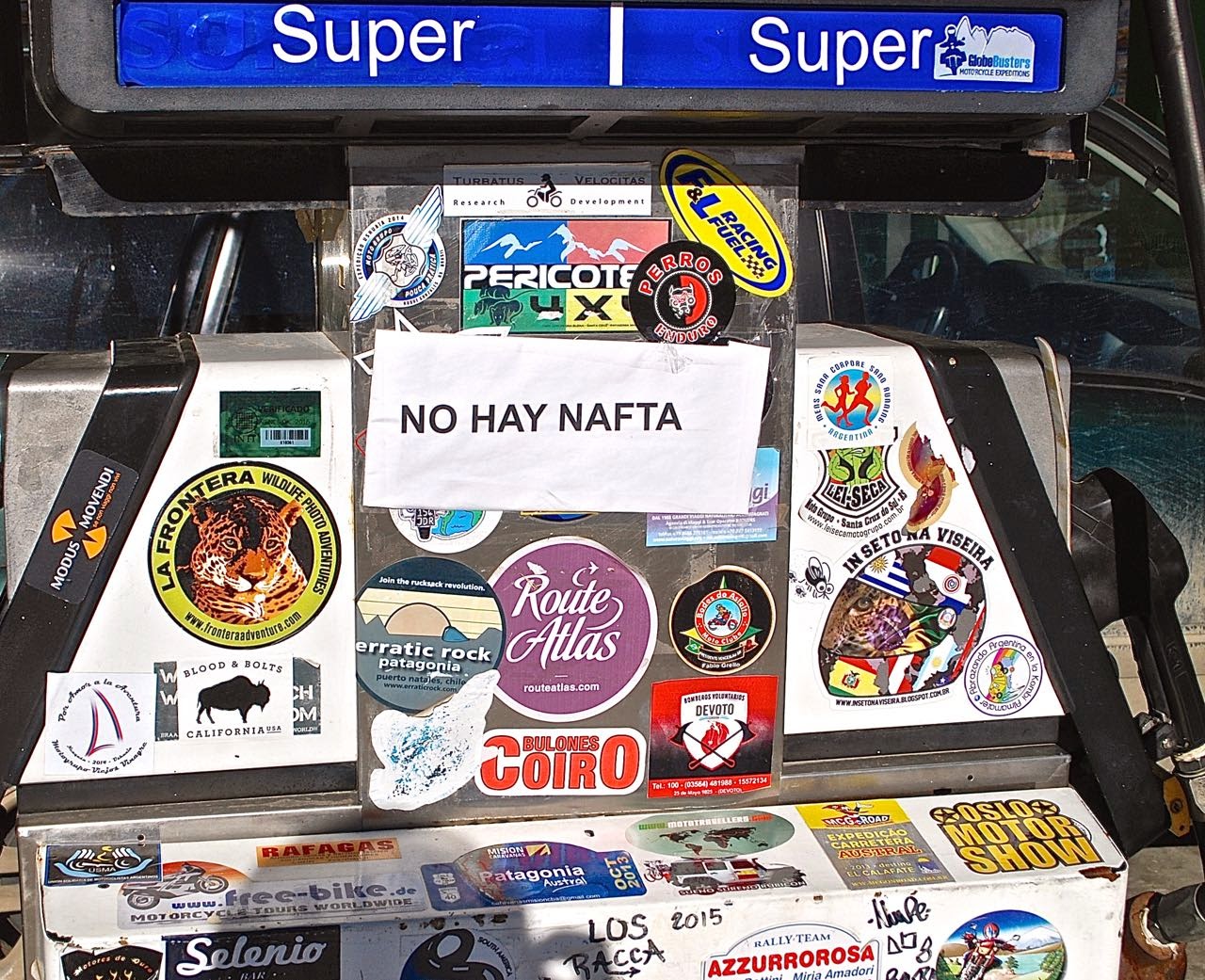 That was a problem because, even though I had enough fuel to reach the next stop at Bajo Caracoles – where I would turn west toward Chile – that remote station was notorious for running out of gasoline, to the point that, in the recent past, some motorists might wait days for the supply tanker to arrive. Given that reality, I had to divert to the more reliable option of Gobernador Gregores, which involved at least an additional hour’s driving. 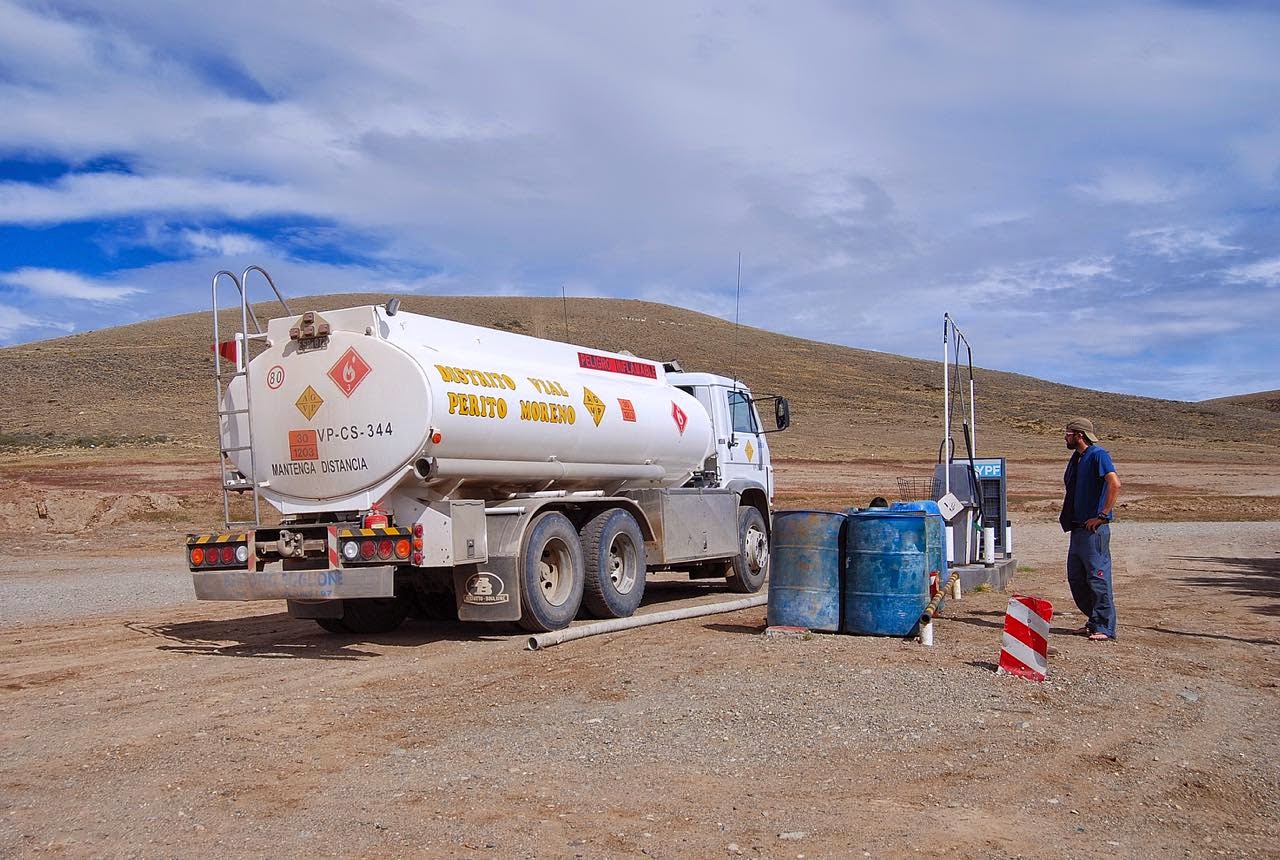 When I finally got to Bajo Caracoles (pictured above, from an earlier trip), there was fuel but I had no way of knowing that in advance. It was also getting late in the afternoon, and I had to decide whether to tackle the rugged westbound road toward Cochrane (where the border would soon close) or follow the paved road north to Perito Moreno and then west to the border towns of Los Antiguos (Argentina) and Chile Chico (Chile).

Reluctantly, I decided on the latter and took advantage of the changed route to pay a brief visit to an ailing and elderly friend in Perito Moreno. I then continued to Los Antiguos only to discover that there was no gasoline on the Argentine side, where the price is about half what it is in Chile. If I had only filled up in Perito, 53 km east, I would have saved a significant chunk of change.

Interestingly, there are two significant slogans on the side of the YPF container at El Chaltén. The shorter one translates as "Social Supply Module," while the longer one says "Wherever an Argentine needs energy, we're there." Of course, I'm not an Argentine, so maybe I don't count - but the car that pulled up behind me at Tres Lagos was.

The moral of this story could be that, if you don’t follow your own advice, you get what you deserve.
Posted by Wayne Bernhardson at 7:58 AM