In the Falkland Islands, a Week Is Not Enough

As a travel writer myself, I’ve long enjoyed The New York Times 52 Places Traveler, in which a single writer (now one much younger than myself) spends a year exploring the world and producing weekly dispatches from some relatively well-known destinations and other more remote ones. In my own experience, the logistics of organizing several months of travel is taxing enough in my three chosen countries—Argentina, Chile and to a lesser degree Uruguay—that I truly admire the drive and skills of the chosen individual. This year, that individual is Sebastian Modak, whose dispatches appears every Sunday (in print and online).
Yesterday,  Modak’s column dealt with the Falkland Islands, a personal favorite where I spent more than a year as a Fulbright-Hays scholar in 1986-7 and have returned at least half a dozen times. He went, apparently, in early July—“a couple of weeks after the winter solstice”—and says that there were only three other tourists on the Islands (I’m skeptical of that claim). The highlight was penguins, though the only species he mentions are kings and gentoos, which are present year-round (macaronis, rockhoppers and Magellanics are migratory summer residents).
To see the kings, at East Falkland’s Volunteer Point, Modak took advantage of Falklands Helicopter Services, a new enterprise that obviates the need for an all-day Land Rover tour from the capital of Stanley, but that comes at a cost of £349 (about US$430) per person, with a two-person minimum (cheaper overland options are possible, but probably not in July). I can certainly concur, however, with his recommendation of the “Round Robin Flights” by the Falkland Islands Government Air Service (FIGAS) that can give visitors a spectacular aerial overview of the entire archipelago at a fraction of that cost. He also went overland to the settlement of Darwin to see the Bodie Bridge, the world’s southernmost suspension bridge that’s apparently on its last legs (er, towers…) in the peninsula of Lafonia (while I have visited Darwin, I never made it farther south to the bridge).
Stranded in Stanley?
Modak, meanwhile, is almost shockingly silent on the capital of Stanley even though, of necessity, he spends several days there because weather delays his departure from the Islands. That’s not an uncommon occurrence but, for a journalist scheduled to report on 52 destinations in 52 weeks, it’s a major inconvenience. He uses the time to explore Stanley’s pub culture but, somehow, he overlooks a surprisingly creative food scene and the Historic Dockyard Museum—which might the best in the world for a town of its size (about 2,500 residents).
While the Falklands is much more than 1982 war between Britain and Argentina, the museum offers a professionally measured description of that conflict, which he says comes up with virtually everybody he meets. That’s not quite my experience, even though my wife is an Argentine who also spent a year there with me (on her US passport). He also, apparently, overlooked the multi-ethnic melting pot that the Islands have become since the war, with Chileans, Saint Helenians or "Saints," and even Argentines (there have always been some and, at one point, there was an Argentine policewoman).
While Modak had some trouble getting out of the Islands he does, in my experience, overstate their inaccessibility and remoteness: “Consumed by a sense of total isolation, I leaned into the rare feeling of being off the map, stuck somewhere and part of a small community of travelers.” In fact, the Islanders themselves have always been in constant contact with the outside world—whether by mailboat, amateur radio, telephone and now Internet—and often express a sophisticated understanding of overseas events. The Internet may be slow and expensive—I can attest to that—but, as he acknowledges, there will now be a second weekly flight from the South American continent (in addition to the well-established connection with Santiago and Punta Arenas, Chile).
Had he visited in January, when cruise ships can double Stanley’s population for a day, he might have adjusted his conclusion that “There’s no chance of ever being a major destination…” The Islands may be a niche experience, but one that’s likely to grow, especially as the logistics improve for those who prefer to be land-based. That’s my preference, I’ve been back at least half a dozen times, and I’ll do so again soon.

Post-Script
This being The New York Times, it’s worth mentioning the readers’ comments, of which there were just 17—almost all of them superficial and a couple astonishingly ignorant. One Patty Mutkoski of Ithaca lamented that there was no place for “long walks” because of “all the land mines left over from the war.” As someone who undertook multi-day treks on both East and West Falkland only four years after the conflict, and has seen the results of removal efforts since then, I can assert that there are many fine hiking opportunities around Stanley and also on the outer islands, such as Pebble, Saunders and Carcass. The biggest obstacle is not land mines, but rather the almost incessant winds.
Another reader, Barbara from California, bemoaned that she “didn’t understand why the USA was sending troops to the Falklands [in 1982], and I still don’t, now.” Perhaps that’s because the United States never sent a single soldier there; in fact, the Reagan Administration made every effort to appease Argentina’s military dictatorship before finally providing rhetorical support for British Prime Minister Margaret Thatcher’s counter-invasion. Another commenter, MBV from New York, dismissively proclaimed that “There’s nothing to see here, and it shows.” Just because Modak missed an opportunity doesn’t make that true. 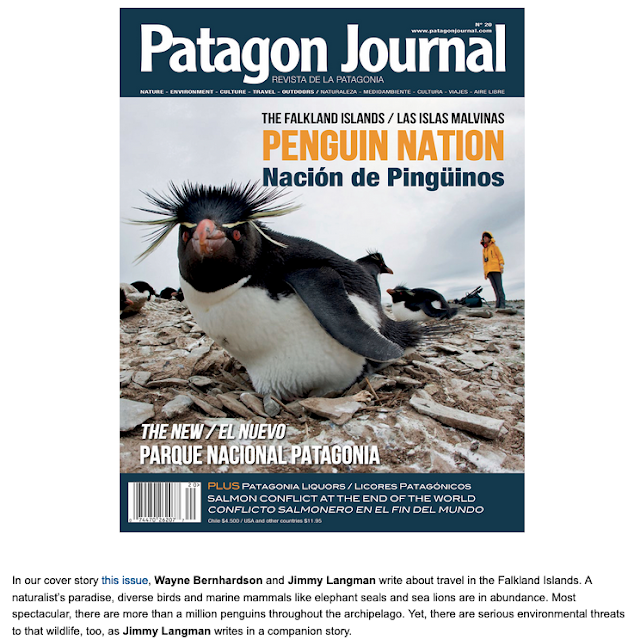 Purely coincidentally, my own “Exploring the Falkland Islands” is the cover article on the new issue of Patagon Journal, available online and in hard copy.
Posted by Wayne Bernhardson at 4:06 PM

I want to see penguins in person too! They are so cute ^^ However, my vacations in this year are over and maybe next year I'll go to the Falklands. This summer I was in Breckenridge https://worldcams.tv/united-states/breckenridge/main-street. There were my friends and I decided to visit them instead of going abroad.

A week is really not enough to explore all of the Falkland Islands. The photography has made me fall in love with this place and I wish I could visit this place. Here's another interesting article for the travel junkies. Fifa Mountains