Over the past couple months, I’d been experiencing chest pain, and had attributed that to the series of bronchitis infections I’d suffered over the past several months in California, Argentina and Chile. Two weeks ago, though, they became sufficiently acute that my GP suggested I do a treadmill stress test and see a cardiologist who, evaluating the results, told me that “you’re a sick puppy.”

There’s a history of heart disease in the family, as my father and both his brothers died from it. The cardiologist’s original idea was to place a stent to clear out my clogged arteries without undertaking anything more invasive, but a camera probe showed the arteries could not support that alternative and that, in fact, I could have suffered a massive heart attack at any point. Keeping me under intensive care at Kaiser San Francisco for several days, until the dissolution of blood-thinning medication I had been taking, permitted them to undertake a triple bypass operation last Wednesday June 29th, and I came home this afternoon. 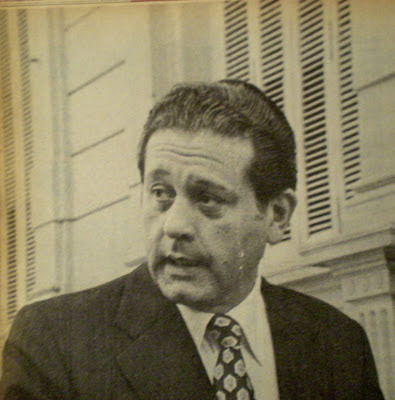 That’s where the link with Southern Cone Travel comes in: the Argentine cardiologist René Gerónimo Favaloro (pictured above), who worked at Ohio’s Cleveland Clinic, was a pioneer in arterial bypass treatment, and his Fundacion Favaloro, in downtown in Buenos Aires, is probably Latin America’s foremost cardiological research institute and teaching hospital. Unfortunately, Favaloro himself never lived to see the success of the procedure, as he killed himself with a gunshot wound to the heart in 2002 – when the depths of Argentina’s worst economic crisis ever must have made that success seem ever more remote.

Dr. Favaloro’s procedure, though, should make it possible for me continue updating and improving my Moon Handbooks to Argentina, Buenos Aires, Chile and Patagonia, with a minor inconvenience: the wire that now holds my healing sternum together may set off airport metal detectors. That’s a small enough price to pay for another two decades or so on the planet.
Posted by Wayne Bernhardson at 7:11 AM

Glad you are on the mend and hope that continues! Just stopped by to grab info to add the Southern Cone Travel blog to my Blogs about Chile page - sad to hear of your illness and even sadder the story of René Gerónimo Favaloro. Lucky for you to have gotten the care you needed. Best, Molly

Glad to hear the surgery went well! Hope you get well soon!

Sounds like we've both been derailed by unexpected health issues this summer. I'm very glad to hear your surgery was successful. My dad had a massive heart attack in the hospital 20 years ago while he was waiting for his bypass, and then was okay for another 15 years after they "renovated his plumbing" (his words). People keep telling me I'll recover faster in the long run if I take it easy now, so I'll pass on their advice: Take it easy while you recover.

Fortunately, I did not have a heart attack (though I could have had, at any moment).

Wayne, you're too young to be a heart patient! Take care of yourself, and best wishes for a speedy and uneventful recovery.

I would like to think so, but that's obviously not the case.