Puerto Madero's Bridge to the Future

One highlight of the Buenos Aires revival has been the reclamation of Puerto Madero, the riverside docklands that was shuttered by the military dictatorship of 1976-83. Since the 1990s, the red brick warehouses that stood empty for decades have come to house lofts, 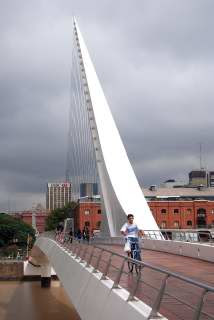 restaurants, shops and offices, its waterfront promenade is a favorite with pedestrians (part of the highly entertaining con-man film Nine Queens was shot here), and a former rubbish dump has become a haven for hikers, cyclists, and wildlife.

New high-rises are also making Puerto Madero one of the costliest and exclusive barrios in the city, but its open spaces make it an inviting destination for porteños of all social and economic classes. One of its welcoming symbols is Spanish architect Santiago Calatrava's Puente de la Mujer, a pedestrian suspension bridge that swings open to allow the passage of yachts and other vessels between the northernmost basins of the old port area. This week's New Yorker magazine contains a lengthy profile of Calatrava that's must reading for anyone interested in its background, though the bridge itself gets only a brief mention.
Posted by Wayne Bernhardson at 10:10 AM