With a Pacific coastline that stretches for more than 2,500 miles (over 4,000 kilometers), much of it resembling the state of 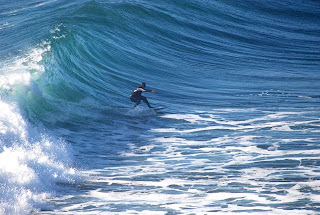 California and Mexico’s Baja California, Chile makes an ideal destination for surfers. From the desert coast of the Norte Grande, where the cities of Arica and Iquique make the best bases, to the headlands of the Chilean heartland, north of Viña del Mar, there are almost endless options for surfers. Because the community of Chilean surfers is relatively small, the competition for waves is not what it would be in, say, Southern California.

That could change, though, if mayor Roberto Córdoba of Pichilemu - Chile’s almost undisputed surfing capital west of the Colchagua valley wine district about three hours southwest of Santiago - has his way. Pichilemu (whose Punta de Lobos point break appears here) is already home to the Campeonato Nacional de Surf, the national surfing championships, but according to the Santiago Times, the mayor plans to introduce surfing as an elective course in four of the town’s poorest performing schools.

The idea, says Córdoba, is to encourage an activity that has economic potential - there are several surf schools and rental equipment in town - and also to provide a recreational outlet for disadvantaged kids who are otherwise bored and, sometimes, in trouble. That many of these kids could become professional, as the mayor seemed to imply, is doubtful, especially as the cost of equipment, training, and travel is well beyond the means of most of them. Still, the idea of making them participants, rather than just observers, seems worth the effort.
Posted by Wayne Bernhardson at 6:37 PM No comments:

Almost as I was leaving Buenos Aires in July, the Argentine banking networks Link and Banelco 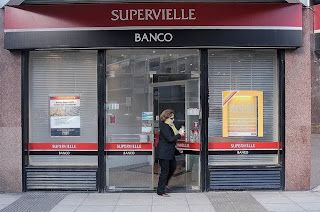 started imposing ATM charges of 11.45 pesos (approximately US$3) on every withdrawal by foreign customers. As banks struggle for profitability in the current financial crisis, of course, it’s unsurprising to see them try to milk every possible penny out of their customers, but the Argentine case had a special characteristic: it was combined with a withdrawal limit of 300 pesos (about US$79) per transaction. Anyone using Link or Banelco ATMs could do at least three consecutive transactions, but this would have meant an additional US$3 fee for each transaction. I estimated personally that, given the amount of time I travel in Argentina every year, those fees might have cost me an additional US$100 per month in bank charges.

Fortunately, there is a (sort of) happy ending. Under pressure, apparently, from international banks, Link and Banelco have been forced to rescind the 300-peso limit - on my most recent trip to Buenos Aires, I was able to withdraw 790 pesos on one transaction, and might have been able to get more. The ATM charge of 11.45 pesos (in addition to any your own bank might impose) still holds, but that’s a lesser concern if there’s only a single transaction rather than three.

It’s worth repeating that, in general, Argentine ATMs pass out large banknotes that can be difficult to change - that’s the reason I asked for an uneven amount such as 790 pesos, which ensured that I would get some smaller bills. On my last exchange before the limit was lifted, however, I requested the maximum 300 pesos and received an unheard of 30 ten-peso notes, which filled my wallet to overflowing - go figure!

At the same time, Argentine two-peso notes have supposedly been in short supply because of a TV promotion - an Argentine station has been conducting a sort of lottery based on their serial numbers. While that shortage wasn’t so obvious, finding sufficient coins continues to be difficult, and having the proper change to board a city bus or pay for small purchases such as newspapers continues to be difficult.

Meanwhile, in Chile, the Redbanc system has imposed ATM charges of 2000 to 2500 pesos (about US$3.70 to US$4.60) per transaction, but it has never even tried to enforce the sorts of withdrawal limits that their Argentine counterparts have. According to some of my Chilean correspondents, though, Banco Estado, Banco Desarollo, and Corpbanca still do not collect ATM charges on foreign debit cards. This information, though, is subject to change without notice.
Posted by Wayne Bernhardson at 12:20 PM 1 comment:

It’s approaching spring in the Southern Hemisphere, and that means that migratory penguins are returning to their Patagonian nesting sites in Argentina, Chile, and the Falkland Islands. From Argentina’s Península Valdés, all the way around Cape Horn to the Pacific archipelago of Chiloé, Magellanic penguins - colloquially known as “Jackass penguins” because of their braying call - are the most abundant and easiest species to spot, but determined or fortunate penguin seekers may also see several other species at various locales.

Península Valdés is a prime wildlife site because of the whale-watching industry at the hamlet of Puerto Pirámides, but there are also several colonies of the migratory Magellanics scattered around the reserve. Occasionally, though, startled visitors even find themselves swimming with penguins in the shallow waters just off Pirámides’ beach (usually in summer, after the right whales have returned to the open Atlantic. Most visitors, though, go to the colony of Magellanics at Punta Tombo, south of the Atlantic beach resort of Puerto Madryn, where hundreds of thousands of Magellanics waddle ashore to mate, hatch their eggs, and raise their chicks before returning to the ocean in March or April. Occasionally there’s a surprise - last season, for instance, a wandering king penguin (not the one pictured here) made its appearance.

Other good Argentine sites for penguin-watching include Bahía Bustamante, Puerto Deseado, Parque Nacional Monte León, and Cabo Vírgenes. Puerto Deseado makes a particularly interesting detour because it’s the gateway to Isla de los Pingüinos, which has not just Magellanics but also the world’s northernmost colony of rockhopper penguins. Elsewhere along the continental coast, rockies are a rare sight, as they are most abundant in the Falklands.

In southernmost Chile, the most accessible penguin-watching sites are at Otway Sound, barely 45 minutes overland from the city of Punta Arenas. Isla Magdalena, in the Strait of Magellan, is a little harder to reach but worth the effort because the ferry voyage there is an opportunity to view Commerson’s dolphins, black-browed albatrosses, and many other seabirds that nest on the island. Across the Strait, on the Argentine side of Tierra del Fuego, the historic Estancia Harberton conducts trips to offshore Isla Martillo, where a small but growing colony of gentoo penguins (pictured to the right) shares the island with much larger numbers of breeding Magellanics. For visitors to the city of Ushuaia, this is the best opportunity to see gentoos (which are not migratory) without continuing to Antarctica (more than 90 percent of Antarctica-bound cruises leave from Ushuaia).

On Chile’s Pacific coast, near the city of Ancud in the Chiloé archipelago, the offshore Isla Puñihuil is particularly interesting because it’s where Magellanic and Humboldt penguins - which look very similar - overlap their ranges and breed almost side by side. The Humboldt’s range, though, stretches north through Chile and into Peru.

The Falkland Islands, meanwhile, are more expensive to get to, and to get around, but dedicated penguin watchers will find it much easier to observe gentoos, kings (Volunteer Point, at Johnson’s Harbour ranch, has a huge breeding colony), and rockhoppers as well as rarer macaroni penguins (pictured here) that breed among the rockhoppers in a few sites. Occasionally, as well, a wandering chinstrap penguin - they are most abundant in Antarctica - will put in an appearance among the gentoos.
Posted by Wayne Bernhardson at 3:55 PM 3 comments:

Housing and Happiness in Buenos Aires

Having grown up in Washington State and spent most of my adult life in California, I have almost always lived in single-family detached houses with large gardens. Only since 2002, when we bought an apartment in Buenos Aires, have I spent any significant time in an apartment building 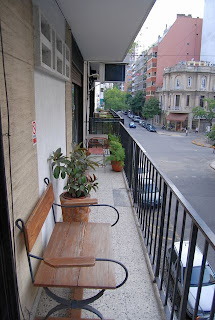 - in this case, a ten-story structure in the barrio of Palermo.

Unlike California, where trees and fences give our two-story house substantial (if less than absolute) privacy, in Buenos Aires we are in far closer quarters. In fact, we could literally climb over our balcony railing onto the neighboring building’s balconies on either side (as the photograph here suggests). That said, we’re fortunate to live in a relatively quiet middle- to upper-middle class area where all night parties and other conflicts with neighbors are few - unlike the sorts of happenings that Buenos Aires Herald columnist Guido Minerbi details, with gentle humor, in a recent Sunday column. Anyone thinking of purchasing property in Buenos Aires would do well to read Minerbi’s column, but not to take it too literally.

For all the potential aggravation of living in a mega-city, porteños (as residents of Buenos Aires are called) are apparently a happy bunch. According to a recent survey published in Forbes, the Argentine capital is the world’s tenth happiest city, although the author’s comment that “it’s a slightly diluted version” of Rio de Janeiro is bizarre, to say the least.

Nevertheless, that’s not the only positive assessment of Argentina in the news recently. According to Dutch sociologist Ruut Veenhoven, it’s the world’s 13th happiest country, tied with Ireland and the Netherlands. The United States, by contrast, is tied for 27th with Guatemala, Malta, Saudi Arabia, and Trinidad & Tobago (five countries that, culturally at least, would appear to have little in common).

Any such survey, of course, is open to criticism of its methodology and conclusions but, at the same time, it’s interesting that two such surveys would appear nearly simultaneously. Especially about a city that’s so renowned for its shrinks that historian Mariano Ben Plotkin detailed the phenomenon in Freud on the Pampas: the Emergence and Development of a Psychoanalytic Culture in Argentina, published by Stanford University Press (2001).

My own Palermo neighborhood is notorious for its concentration of psychoanalysts in its so-called Villa Freud and, in any event, I'll be flying to the world's tenth-happiest city on Wednesday for about two weeks.
Posted by Wayne Bernhardson at 7:15 PM No comments: