Since March of 2020, when I fled Argentina and Chile with the onslaught of the COVID-19 virus, I’ve been not quite housebound, but have only managed scattered day trips in the Bay Area and the couple short road trips to California’s Central Coast and the Sonoma/Mendocino County shorelines. Like many others, I’ve spent more time than I might care to admit in front of the TV screen, streaming whodunits and other dramas before retiring early enough to let me walk the dog at daybreak. I've avoided travel shows, because they remind me of what I can’t do until the pandemic recedes (very tentatively, my wife and I plan to return to Buenos Aires in early March for a month).

Meanwhile, in the course of exploring streaming services, I stumbled across an oddball series, a sort of black comedy, set in North Carolina but with links to Argentina. In Good Behavior, which first showed on TNT in 2016 and 2017, English actress Michelle Dockery plays the role of Letty Raines, a resourceful thief and scammer with addiction issues, who’s out on parole and trying to regain custody of her pre-teen son. This rather differs from Dockery’s role as the aristocratic Lady Mary Talbot in the PBS historical series Downton Abbey (disclaimer: I am not a fan of British costume dramas, and have not watched more than a few minutes of that one, to which my wife is addicted).

Shortly after her release from prison, Letty stumbles upon a contract killing and does her utmost to stop it (albeit unsuccessfully). In the process, she becomes involved with Javier Pereira (Juan Diego Botto), an Argentine hitman with a conscience of sorts (Botto is in fact an Argentine who spent part of his youth in the US). The Pereira character is also a chef who sometimes works in the Argentine-style parrilla (grill restaurant) owned by his sister Ava (played by Botto’s real-life sister María in a sort of meta-role).

Javier is not a Hannibal Lecter wannabe, but he does have issues with his father Oscar (played by the Argentine-American Daniel Faraldo), who has a dark past of his own. There’s an additional complication in Ava’s ex-boyfriend Teo (played by Canadian actor Juan Riedinger), but there’s plenty of comic relief as well.

Unfortunately, TNT cancelled the show after two seasons, but it remains available on Hulu (no endorsement here, but there are 30-day free trials).

If you've found this blog informative and/or useful, please click a (hopefully appropriate) ad to earn me a few pennies.

Posted by Wayne Bernhardson at 2:40 PM No comments:

At the end of last month, I wrote that my wife and I had postponed a planned trip to Buenos Aires because of the spread of the Omicron variant of the COVID-19 virus there. In addition, our route would have taken us through COVID-friendly Texas and, given the frequency of flight cancellations by American Airlines, it was possible we might have had an unwelcome delay of a day or more in Dallas/Fort Worth. 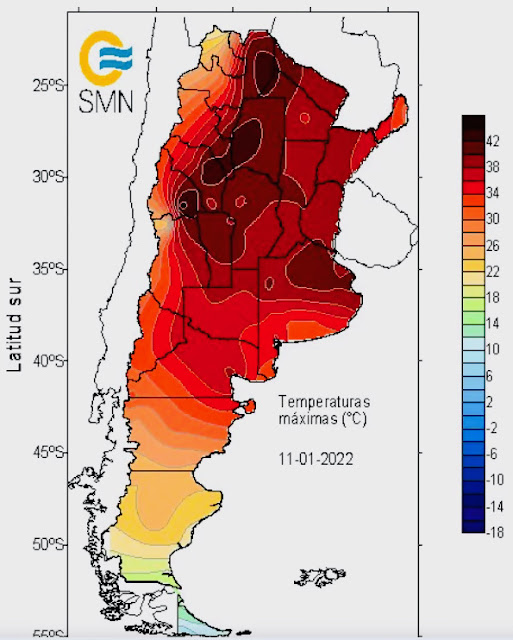 Very tentatively, we’re hoping to try again in March, but early January provided us yet another reason to justify our decision—a brutal heat wave that struck the Argentine capital and much of the rest of the country. In summer, of course, we would expect warm and even hot temperatures, but last week the mercury soared to 106° F (41° C) in the city and, in the north-central city of Córdoba, it reached 108.5° F (42.5° C). The western desert city of San Juan was a near-furnace at 111° F (44° C).

A few years ago, we reluctantly installed air-conditioning in our Palermo apartment, but we’ve never used it during our time there—our idea was that it would appeal to short-term rentals. Even that mightn’t have mitigated this heat wave, though, as there were power outages in much of the city. Global warming, anybody? 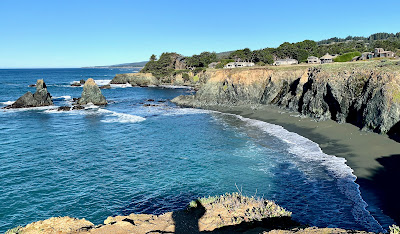 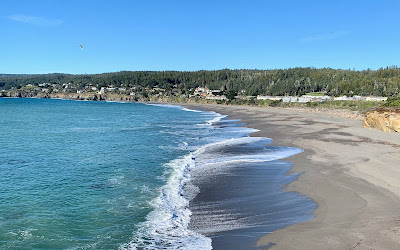 The town of Gualala (as seen from Sea Ranch)

With that in mind, we took a mini-vacation with our daughter, her boyfriend, and our two dogs, up the Sonoma County coast to Sea Ranch—an ostensibly eco-friendly development that I’m personally ambivalent about. The scenery resembles coastal Chile, the night skies sparkle, and there’s almost total silence except for occasional gobbles from wild turkeys outside your windows and waves crashing on the beach. Still, I find the supposedly cutting-edge architecture monotonous and the absence of any urban amenities bothersome—there’s no alternative to the automobile for transportation to the town of Gualala, some miles north, for essential shopping. In effect, Sea Ranch is a de facto “gated community” even though the State of California requires obligatory coastal access for non-residents. 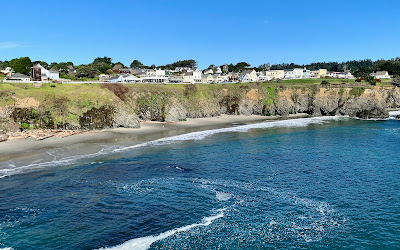 The village of Mendocino, as seen from the nearby headlands

We spent four nights in a short-term rental house, arriving on a Friday afternoon and leaving the following Tuesday morning. Two full days is about my limit there but, given the late Friday arrival, Saturday and Sunday were dedicated to extended dog walks on the coastal trails (significantly cooler than Buenos Aires). On the Monday, though, we escaped north to the truly picturesque seaside town of Mendocino (population 855), where we walked along the coastal cliffs and explored its quaint architecture, including numerous water towers—some of them since converted to housing.

In popular culture, Mendocino has been a location for numerous films and TV series, but I recall it best for the 1968 hit song “Mendocino” by the Sir Douglas Quintet (Texas transplants to California whose producer chose the name to try to capitalize on the Beatles-inspired “British invasion” craze; the above video is a version by Sahm's later band, the Texas Tornados). Interestingly, my wife knew the song even before we met, as it was also a big hit in Argentina; though neither she nor her friends really understood the lyrics except for the title, they could dance to it.

Even more interestingly, the group leader Doug Sahm (born in San Antonio) was of German extraction and, I recently learned, Michael Holm (above) recorded a German-language version that became a chart-topper in then West Germany the following year. Does this explain the fact that the German real-estate firm Engel & Völkers maintains an office in Mendocino, and that all its window listings there are bilingual in English and German? Perhaps it does, as the comments on Holm's YouTube video include one by a German whose wife insisted he take her to visit there (German used to be my second language, but it’s now a distant third to Spanish and I couldn’t catch much of Helm’s lyrics).

Mendocino seems idyllic, but it’s not immune to the rest of the country’s problems. Almost everyone we saw in town was masked up but, not that long ago, the anti-vax owner of Fiddleheads Café posted notices that he would collect a surcharge for any client wearing a mask, and an additional charge for anyone who bragged about being vaccinated. He’s since gone out of business, but might still be welcome in Texas (in fairness, the state has great food and music despite its COVID-friendly politics).

Posted by Wayne Bernhardson at 6:17 PM No comments: