More than a year ago, the Argentine government first floated the idea of a “reciprocity fee” for foreign tourists whose governments require visas, with similar fees, of Argentine citizens. This past Monday, it finally imposed 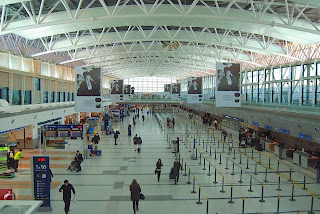 such fees and, from now on, citizens of the United States, Canada, and Australia will be required to pay such a fee on arrival at Buenos Aires’s Aeropuerto Internacional Ministro Pistarini, better known as “Ezeiza” (pictured here). However, according to some sources, up to 22 countries may be affected sooner or later.

The government’s measure (which resembles a similar policy in neighboring Chile) is not unfair. For an Argentine, or any other foreigner applying for a US visa, for instance, the process is expensive and cumbersome. Not only must he or she pay the non-refundable fee in advance, but a personal interview at the US consulate in Buenos Aires is obligatory even for someone who lives in, say, far-off Ushuaia - an expensive four-hour flight that would, in all likelihood, require the applicant to take time off work. The process can be invasive and even humiliating, as the US government asks for bank records and other personal information.

Yet, while it’s not unfair, the Argentine policy is foolish. For visitors from the aforementioned countries, Argentina is a distant destination, and flights here can be costly. Some indignant Argentines claim, of course, that it’s even more expensive for them to travel abroad with a weak peso, but it’s all relative. The tourism industry does not exist in a vacuum, and a middle-class North American couple might look at the extra $524 it would cost their family of four to travel to Buenos Aires and decide instead on, say, Mexico or Costa Rica, where flights are more affordable as well.

As ideology trumps pragmatism, the economic impact could be unequal but long-lasting. It’s unlikely to affect truly wealthy visitors, but could deter youthful backpackers for whom Argentina has become a popular destination over the last several years. If they do come, they are likely to reduce their aggregate spending by the amount of the fee - making this simply a transfer from the private sector to the government. If they choose another destination, flourishing institutions such as hostels and local tour operators, as well as small businesses such as supermarkets, would lose more revenue than five-star hotels. At the same time, Argentina should be looking to create a market for return travelers, rather than single visits, and those who never come will never return as prosperous middle-age professionals. Tips, which go directly to service providers, are likely to decline.

Details of the measure are unclear as yet as there is no complete summary on the website of Argentina’s Dirección Nacional de Migraciones. Some sources suggest that US nationals’ fee will be valid for ten years, as Argentine visas to the US are - making it a relatively minor expense for frequent visitors. On the other hand, others say that the fee for Canadians (US$70) and Australians (US$100) will only be valid for a single entry. For the time being, in any event, it will only be collected at Ezeiza.

Then there’s the question of revenue. According to interior minister Florencio Randazzo, as quoted in the weekly newspaper Perfil, “the revenue will permit us to modernize border crossings and migration control of those who enter Argentina by air, land, sea, or river.” In fact, the anticipated revenue of roughly US$40 million per annum - about US$1 per Argentine - is a pittance if, as Randazzo states, the goal is “to bring equipment up to date and comply with international standards on biometric identification.”

What’s clear is that the measure was poorly conceived and is likely to be equally poorly executed. While it may satisfy a certain impulse for dignity and equality among some Argentines, it could be a drag on one of the most vigorous sectors of the economy.
Posted by Wayne Bernhardson at 12:19 PM

Wayne,
The new policy is embarrassing to Argentina largely because it was imposed out of petulance, rather than for fiscal or policy reasons, and punishes people who had nothing to do with the visa rules in their own country.

That said, nobody should expect logic in these matters, and as long as one can pay the fee and get one's visa upon arrival, it's but a minor annoyance.

We'll see in the hort future is this reciprocity fee is negative or not for the ourism in the country.

That's a lot of money for a cheap meal. Buenos Aires has no world class sightseeing attractions. Most people won't bother to visit.

That's a superficial and even willfully ignorant statement. Buenos Aires itself is a world-class attraction, which is why National Geographic Traveler asked me to write an "Authentic Buenos Aires" article - the same treatment it gives to New York and Paris, for example (the piece is due out in the March issue). Beyond Buenos Aires, Argentina has many other world-class features, including UNESCO World Heritage Sites at Iguazú falls, the Moreno Glacier, and the Quebrada de Humahuaca. In fact, it has enough to last a lifetime.

I am assuming you would also have to pay the entry fee into Argentina if your travel by bus, right?

No, for the moment at least, the fee is being collected ONLY at Ezeiza, the international airport in Buenos Aires.

There is one difference between the US system and the Argentine system, despite however difficult the interview, etc., process is. With the US system, at least you know if you're being granted the visa before you buy your ticket. With the Argentine system, the fee is strictly administrative and has nothing to do with the visa. Migraciones officials can (and do - I know of two wine colleagues and one friend who have been sent packing in the last three years) turn you away at entry point, requiring you to purchase a return ticket on the spot, generally full price. That's on top of having already spent the money on your ticket to get to Argentina.

Actually, Dan, US immigration officials can (and have) turned away visitors with visas at the border - this was particularly notorious with Brazilians a couple years, which led Brazil to retaliate by fingerprinting every US citizen who arrived there (which so upset the mayor of Rio de Janeiro that he dispatched a delegation to the airport to greet US arrivals with T-shirts and other gifts).

I don't know of anyone having been arbitarily refused entry into Argentina, and would be curious to know more about the cases in question. I think we can all agree, though, that any such actions, by any country, cause ill-will and are ultimately counter-productive.