In 2009, for the first time, the Dakar Rally was held outside Africa because of safety and security concerns - particularly the threat of terrorism in the 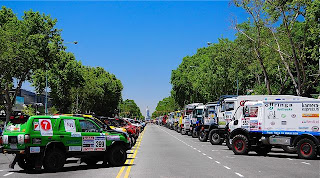 country of Mauritania. Instead, organizers moved the event to Argentina and Chile, where this was not an issue. On New Year's Day, the 2010 South American event began in Buenos Aires, after the participating vehicles were on display near Palermo’s Sociedad Rural (as pictured here) for several days.

Safety and security, of course, are relative terms when it comes to fossil fuel “sports” such as off-road automobile and motorcycle racing. It’s certainly not secure for the plants and animals destroyed or killed by speeding vehicles as they tear up the desert and the Andean altiplano (the Chilean town of San Pedro de Atacama specifically requested Dakar to keep away from its natural and archaeological resources). And it’s not secure for humans either - last year, the rally claimed three lives and, this year, Dakar 2010 needed only one day to take its first life, a spectator in Córdoba province. Five other spectators were injured.

In what other “sport” is grisly death a predictable outcome of the competition? Even leaving aside the question of whether we should encourage extravagant recreational consumption of fossil fuels, which are a limited and declining resource, Argentina and Chile should rethink their support of Dakar. Or at least, perhaps, we should acknowledge that this is a blood sport.
Posted by Wayne Bernhardson at 2:13 PM

I heard that this is the last year that the Dakar will be held here.

I had not heard this, though I would hope so. Yet it's hard to see the race returning to Africa without major security improvements in Mauritania, and that seems unlikely (mind you, the Dakar is no less destructive in Africa than it is in South America).

Possibly worth noting that the spectators that were hurt were viewing the race from an area that was off-limits to spectators (on the outside of a turn).

Another note (not that it is environmentally benign, but...) most of the rally--with the exception of sections in the dunes--is run over existing pistes in differing states of maintenance.

FYI--if it returns to Africa, it won't run to Senegal via Mauritania--it will go from morocco across to libya/egypt.

Excellent blog, by the way.

Thank you for the thoughtful comment. It's true that the dead woman and the injured were where they shouldn't have been, but that's inevitable in this sort of event. They were fortunate that this was the only fatality, as one motorcycle rider - an Italian, if I recall correctly - ended up in a coma, but eventually came out of it.

I stand by my comments on the destructive aspects of Dakar - we should be looking to rehabilitate damaged deserts, not make them worse.