When contemplating Patagonia, not many people think of the movies – even though there’s a surprising assortment of films about the region, some of which I’ve already covered in this blog. For the moment, though, I’d like to bring up the origins of Chilean cinema, which owe a great deal to its remotest region. 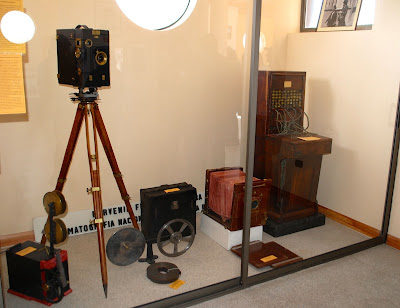 In the town of Porvenir, across the Strait of Magellan from the regional capital of Punta Arenas, the renovated local museum exhibits vintage film-making equipment (pictured above) and pays tribute to German-born José Bohr (born 1901, pictured below), who came south as a child and started his career by filming local newsreels. From his first newsreel in 1919, his career spanned half a century, ranging from Tierra del Fuego to New York, Hollywood and Mexico. 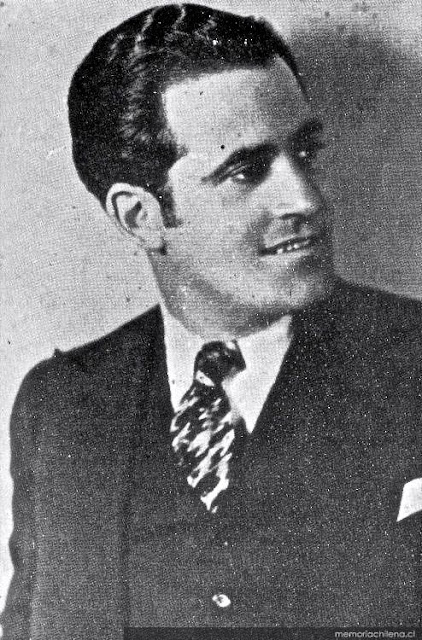 Bohr’s first major effort, El Desarollo de un Pueblo (The Development of a People, 1920), also known as Magallanes Ayer y Hoy (Magallanes Yesterday and Today), coincided with the 400th anniversary of Magellan’s voyage to the Strait that now bears his name. Having ordered his cameras other gear from Valparaíso by telegram, the audaciously named “Bohr & Ivovich Patagonian Film Company” persuaded local dignitaries to subsidize the project. 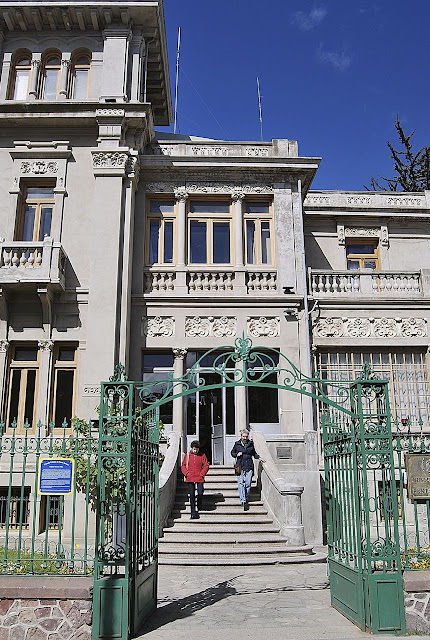 In the process, he and his partner Esteban Ivovich went everywhere in the region including the “extraordinary Fuegian fjords, the glaciers, the ranches, and the mansions of the moneyed.” Among those moneyed was José Montes, who occupied an elaborate home (pictured above) – now housing municipal offices – that still adorns Punta Arenas’s central Plaza Muñoz Gamero. Bohr shot the arrival of many visiting dignitaries, including Prince Ferdinand of Bavaria representing the Spanish King Alfonso XIII. The prince was there for the dedication of the Plaza’s monument to Magellan (pictured below), and the film attracted nation-wide attention. 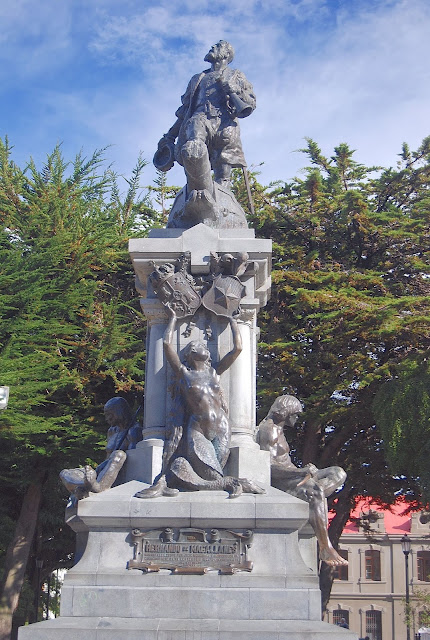 Bohr, though, soon went to Argentina and then Broadway to act in musicals, and then starred in Hollywood’s first Spanish-language film, Sombras de Gloria (Shadows of Glory) in 1929. In the early 1930s, he went to Mexico and then returned to Chile a decade later, where he became president of Chilefilms, a state-run company eventually privatized in the late 1980s.

Some of Bohr’s later work is available on Youtube but, unfortunately, the early newsreels are not. Still, as a composer, he wrote a hymn to the city of Punta Arenas, where the Teatro Municipal José Bohr remains a testament to his influence in Patagonia and beyond.
Posted by Wayne Bernhardson at 5:06 PM 7 comments:

It’s been several months since I wrote about exchange rates, which are an ongoing issue in Southern Cone countries, especially Argentina. The official exchange there is hovering a bit above nine pesos, but the so-called “blue rate” – a euphemism for the black market – went above 15 last year.

What will happen next is anybody’s guess. As I traveled in Patagonia, for instance, it was hard to get even 12 pesos per dollar, but the trend has reversed itself. In the first instance, a crawling official devaluation has taken the pesos from 8.5 per dollar when I arrived in Buenos Aires last November to 9.17 pesos this morning.

Meanwhile, the blue dollar has reversed a recent slide. According to the Buenos Aires Herald, the dollar has risen because of government pressure on cuevas (informal exchange houses) and, today, the rate of 15.09 pesos is the highest it’s been since last October. In the past month alone, it’s risen by 11.5 percent. The Herald attributes that to the beginning of winter holidays, when more Argentines travel abroad, but I think that’s an incomplete analysis.

In reality, the political factor may be stronger. While Argentine President Cristina Fernández may be economically inept, she’s politically astute and has placed her acolyte, Buenos Aires Province Governor Daniel Scioli, in a strong position to succeed her in this year’s elections (after two full terms, Fernández cannot succeed herself). Many of Fernández’s supporters do not trust Scioli, but Fernández has managed to maneuver one of her own favorites, Carlos Zannini, into the position of Scioli’s running mate.

Meanwhile, in the city of Buenos Aires, Horacio Rodríguez Larreta eked out a narrow victory to succeed Mauricio Macri as mayor. Rodríguez Larreta was the hand-picked successor of the conservative Macri, who has long held presidential ambitions, but the race’s closeness suggests that Macri could have more serious problems in the provinces, where candidates from the capital traditionally run weaker.

A Scioli victory over Macri would mean continuity, at least in the short term, for the clumsy foreign exchange controls implemented by the Fernández government. That, in my opinion, has also contributed to the peso’s weakness and is likely to continue to do so. Still, Argentine politics is so unpredictable that I hesitate to make any definitive statement. I will say that it’s likely to be some time before foreign visitors will be able to use Argentine ATMs freely without paying a penalty, but it would be nice if a new government would create larger banknotes than the 100-peso note pictured at top (worth less than US$7).

Meanwhile, Across the Andes 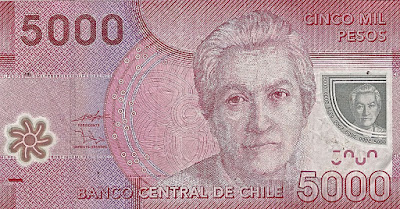 When I arrived in Chile in early February, the free-floating peso was around 630 per dollar in a country with no arbitrary exchange rules. It’s had some ups and downs since then, but currently stands at 645 to the dollar. Relatively stable prices and the convenience of using ATMs make Chile a more comfortable place to travel, at least in terms of money issues. Chile also has larger banknotes than that pictured above (worth about US$8). The 20,000-peso note is worth about US$31, so your wallet is less unwieldy there.
Posted by Wayne Bernhardson at 7:46 PM No comments:

When contemplating Patagonia, travelers eagerly anticipate the lakes, forests, mountains, fjords and other wildlands of this scenic, thinly populated region. Until they actually arrive, though, they don’t usually give much thought to the food that will sustain them – except for Argentine beef and Chilean seafood, the cuisines of both countries have a low profile, but be ready for some surprises. 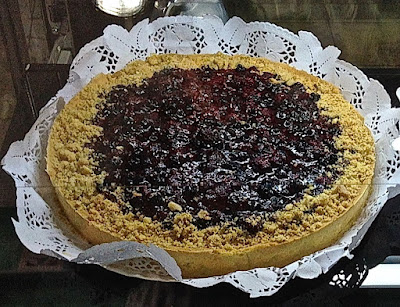 In the northern hemisphere winter, fresh fruit from southernmost South America – such as blueberries and raspberries – has become a common sight in supermarkets. In season, in Chile, these and other fruits give their flavors to kuchen, the Germanic goodies that owe their origins to-19th century immigrants who settled throughout a lakes district that stretches several hundred miles from the city of Temuco south to Puerto Montt, the home port for ferries to southernmost Patagonia. 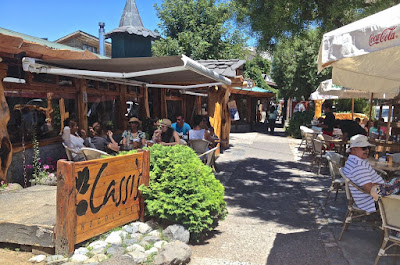 Kuchen – a word that Chileans pronounce similarly to the original German, but do not capitalize as a proper noun – are a common dessert on Patagonian cruises, but they’re readily available throughout the country. Chileans devour them at onces (“elevenses”), a late afternoon tea that bridges the time between lunch and a relatively late dinner. 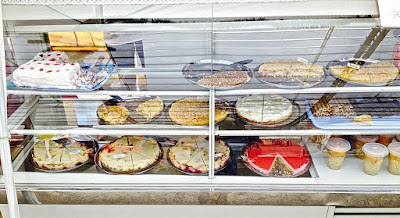 Chilean kuchen are diverse, ranging from pies to pastries to coffee cakes and cheesecakes, but my own favorites have more filling than crust – particularly if that filling is berries, but a strudel-like version is also common. Some people enjoy the presence of caramelized manjar (the Chilean word for dulce de leche), but that’s too sickly sweet for my taste. 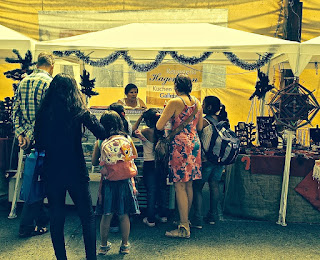 There are quality kuchen almost everywhere, but I’ll offer a few recommendations here. Only 20 minutes from Puerto Montt, the lakeside town of Puerto Varas has multiple bakeries and a summer artisan’s market (pictured above) whose kuchen stands are a big attraction. A bit farther north, known for its stunningly modern theater, the village of Frutillar features the tiny but tasty Kuchenladen and a formal teahouse, surrounded by lavender, that goes by the name Lavanda. 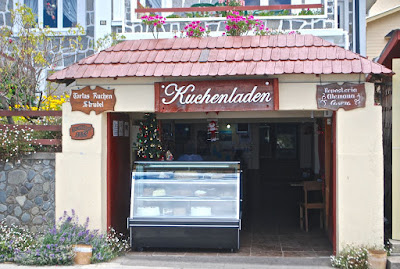 Kuchenladen has a branch in the more northerly resort of Pucón, where Cassis (pictured near top) is also a good choice; in the Aisén regional capital of Coyhaique the best choice is Café de Mayo. Farther south, at Puerto Natales, try the Kau Lodge’s Coffeemaker (pictured below); in Punta Arenas, go for Chocolatta. 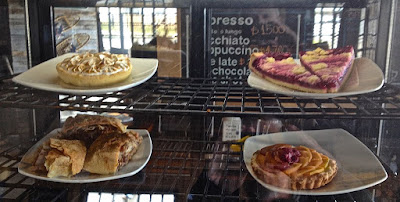 Posted by Wayne Bernhardson at 12:38 PM No comments:

Can Soccer & the Pope Cause Border Issues?

Because of deadlines on another commitment, I’ve been neglecting this blog a bit, but it’s also because most recent off-season news from the Southern Cone has been topics that don’t much rouse my interest, most notably soccer and religion. Though to some people the two apparently overlap, to me they’re the cultural equivalent of Ambien.

First, chronologically, is the fact that Chile hosted the 2015 Copa América soccer tournament and defeated Argentina in the championship game a few days in a so-called “penalty shootout” (roughly equivalent to deciding a basketball game by shooting free throws). It still mystifies me that soccer players are incapable of continuing in overtime until somebody actually scores – at the very least, this would determine which team had the best-conditioned athletes. 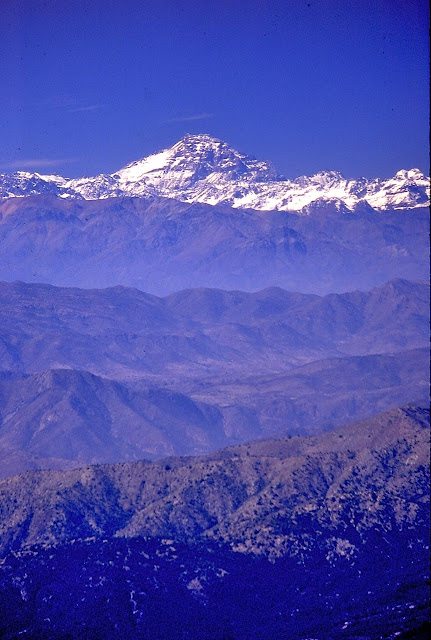 Chileans were ecstatic, Argentines rather less so – especially the 7,000 who were caught on the Chilean side of the Andes when snow blocked their return to Argentina (the photograph above, taken from the Chilean side in summer, shows the snow-covered summit of Cerro Aconcagua in the distance). Some of those Argentines, apparently, responded to the border closure by staging rowdy protests and even robbing chickens and empanadas from a restaurant in the city of Los Andes.

I’ve managed to avoid soccer games since playing briefly as a schoolchild but, decades ago, I actually attended a Mass with a Chilean friend who has since become an atheist. It was a once-in-a-lifetime cultural experience I’d prefer not to repeat, though I do occasionally enter churches – and once, even a mosque – in the course of researching and photographing my own guidebooks. While I can acknowledge their historical significance, that’s the limit of my interest.

Admittedly, that’s not true for everyone – as will be apparent in Paraguay this weekend. Since adopting the alias “Pope Francis,” the artist formerly known as Jorge Mario Bergoglio has still not returned to his native Argentina, but a million Argentines may overrun border crossings this weekend as the Pope is due to make an appearance in the capital city of Asunción.

If so, they’d better do so soon. According to the Buenos Aires daily Clarín, Argentine customs agents will go on strike tomorrow. Whether those who manage to cross the border will be able to return could be another question entirely, and we can only hope they won’t emulate the soccer fans who were stuck in Chile.
Posted by Wayne Bernhardson at 5:27 PM 1 comment: