One deterrent to travel in Argentina—the world’s eighth-largest country—has been the deplorable state of its air services. Throughout my lifetime, the state-run Aerolíneas Argentinas—occasionally under private ownership—has dominated a Buenos Aires-centric system that, with unavoidable stopovers, sometimes made flights as time-consuming as bus trips. The arrival of Chile’s LAN (now LATAM) improved the scenario, but political obstacles kept it from challenging Aerolíneas’s dominance.
At one level, there’s a logic to this pattern, as roughly a third of the country’s population lives in and around the capital, but it also re-enforces the city’s primacy. Traditionally, even important cities with upwards of a million inhabitants, such as Rosario, Córdoba and Mendoza, can only make connections to other provincial destinations via Buenos Aires. It works against the tourist industry as well, when flights between popular visitor destinations such as Mendoza and Bariloche require lengthy detours via the capital.
It’s about to change, though. Earlier this month, the administration of President Mauricio Macri approved 135 new routes by five new or expanded airlines, including the budget carrier AirBondi. Bondi will not begin operations until September, but Neuquén-based American Jet, Córdoba-based Alas del Sur, and the capital-based Andes Líneas Aéreas may begin immediately. Tucumán-based Avian, an affiliate of Colombia’s Avianca, should soon join them.

The idea, according to Macri, is to more than increase the number of flights and more than double the number of passengers by 2019. Given that distances are so great, that long-distance trains barely exist, and that bus services are time-consuming (although the quality is generally high), there’s potential for modernizing Argentina’s transportation system and the tourism sector in particular.


Whenever Argentina announces great changes, it’s always advisable to retain a certain level of skepticism, but greater competition in the transportation sector should be a welcome development—even if part of that is a budget airline likely to charge for checked baggage and other “extras.” For what it’s worth, Bondi’s name derives not from the famous Australian beach, but rather from a lunfardo (slang) term for city buses in Buenos Aires.
Posted by Wayne Bernhardson at 5:39 PM No comments:

Once upon a time, Santiago was a small city surrounded by farmland, including extensive vineyards. Over the past century-plus, it’s turned most of that farmland into factories, houses and roads. Many of those houses now sport parras, the grape arbors that cover driveways and patios for table grapes, but there remain a handful of vineyards and wineries.
The closest of the wineries is Viña Santa Carolina, just a few Metro stops from the central Plaza de Armas, but it has no vines to speak of—all the grapes are trucked into town. A bit farther out, though, in the capital’s Peñalolén district, extensive vineyards still surround the facilities of Viña Cousiño Macul, which has occupied these lands since 1856.
The Cousiños have been in Chile since 1760, and originally made their fortune from coal near the southern city of Concepción—where the lushly landscaped grounds of Parque Isidora Cousiño contrast with tailings from the mines that gave them their wealth. In downtown Santiago, the Palacio Cousiño—current undergoing restoration after the powerful 2010 earthquake—was the family’s urban gem.
In 2005, I met winery owner Carlos Cousiño, who brought wine to shared with other passengers on board the Grigoriy Mikheev, a Russian vessel then under charter to the Chilean company Antarctica XXI. I’d paid an earlier visit to the winery but, recently in Santiago, I took the opportunity to do a bike and wine tour with the Santiago operator Bicicleta Verde.
The ride doesn’t leave from Bicicleta Verde’s downtown Santiago offices (though the company does offer tours of the city proper). Peñalolén’s a bit distant for that, but it’s still a quick trip on the exemplary Metro to Estación Quilín, despite involving a change of trains.
From Quilín, it’s a half-hour walk or a short taxi ride to the winery, where wrought-iron gates open onto a tree-shaded road leading to a complex of buildings dating, in some cases, to the mid-19th century. Bicicleta Verde stores its gear in a warehouse here but, on this particular morning, I was the only client on hand (I chose to avoid the hot afternoon sun). The bikes themselves are basic, with baskets, big tires, limited gears, and hand brakes, suitable for terrain that slopes only slightly from the piedmont vineyards toward the city proper. It’s not a strenuous tour, though the return to winery requires a bit more effort (especially after sampling a glass of cool rosé offered by a well-prepared guide).


After visiting the vines, we toured the atmospheric cellars proper—dating from 1870—where the Cousiño family keeps its private stash and much of the modern equipment resides; there’s also a collection of antique paraphernalia in one museum-like room. Then it was time to conclude the tasting, before catching a cab back to the Metro.

Posted by Wayne Bernhardson at 5:45 PM No comments:

Recent developments in tourist taxation, in the Southern Cone countries of Chile, Argentina and Uruguay, should interest readers of this blog. In the near future, though, I’ll also be addressing potential visa complications in the face of the United States’ new xenophobic government.

CHILE
For many years, I’ve advised visitors to Chile that, when paying for accommodations in US dollars or by foreign credit card, they are entitled to a 19 percent discount. That’s because foreigners on a tourist visa are exempt from the country’s Impuesto de Valor Agregado (IVA, or Value Added Tax).
For those unfamiliar with VAT, it’s a sort of sales tax that levied on products and services within Chile, but not on those intended for export. For some reason, Chile has chosen to define accommodations and some related services as export items, though it’s always mystified me that sleeping in, say, a Puerto Natales hotel might qualify as an export. It’s a legal fiction that also applies, in some cases, to meals and even tours that are part of an all-inclusive package at destinations like Termas de Puyehue Wellness & Spa and the Puyuhuapi Lodge & Spa.
It’s not quite automatic, though. In the first instance, not all hotels can take advantage of it—they must apply to Chile’s Servicio de Impuesto Internos (SII, Internal Revenue Service) for a franquicia tributaria (export permit) and, in the process, prove that a minimum percentage of their clientele comes from outside the country. In reality, this requirement excludes many modest but perfectly acceptable hostales (B&Bs) and hostels from consideration, even though such facilities could probably use the tax break more than their far wealthier counterparts.
There’s a recent change in the law that merits noting. Generally, on arrival, foreign visitors receive a 90-day visa, and hotels must make a photocopy of your passport and tourist in order to provide the IVA discount. Though the immigration policy itself has not changed, however, visitors who have been in the country more than 60 days are no longer eligible for the discount.

While the great majority of visitors are unlikely to stay longer than 60 days—even a brief detour in Argentina or another country restarts the clock—it’s worth noting. If it’s more, though, you might as well be a Chilean resident. Note also that the discount depends on an exchange rate that the hotel may have set early in the season, and could be less (or perhaps more) advantageous than the current daily rate.

URUGUAY
I spend far less time in Uruguay than I do in Argentina and Chile, and only recently became aware of developments in their tourist taxation regime according to Ley 17934. Set at 18 percent, Uruguay’s IVA discount benefits tourists not only in accommodations refunds, but also services such as car rentals and meals. Last year, while dining at Jacinto in Montevideo’s Ciudad Vieja neighborhood, I was surprised to find the discount applied directly to my bill when I paid by credit card. In some cases, though, the discount appeared only when I received my credit card statement at home in California. 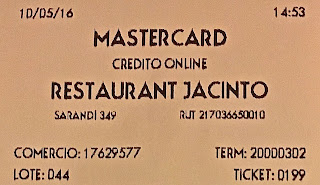 For none of the transactions in question did I have to show proof of tourist status—merely paying with a foreign credit card was sufficient. This makes the Uruguayan policy far more convenient than its Chilean counterpart but also potentially vulnerable to abuse—in theory, I suppose, a foreigner could pay for a large dinner by credit card and be reimbursed by Uruguayan friends who would thereby receive the benefit indirectly.

It’s worth adding, though, that the IVA discount for accommodations is only 10.5 percent, and it has seasonal limits—this year, for instance, it is available only until April 21st. Still, the policy benefits everyone, or at least these able to pay with the proper card.

ARGENTINA
Both Chile and Uruguay have been doing IVA discounts for some time, but Argentina’s a latecomer to the party. The law’s been on the books since 2001, but only this summer did the government of President Mauricio Macri declare that foreign hotel guests would not have to pay the 21 percent IVA that applies to all other products and services in the country. It’s also applicable to all accommodations, ranging from campgrounds to five-star luxury hotels, though clients will have to show their passports or other identification (visitors from neighboring countries may not need passports). The only acceptable means of payment, though, is a foreign credit or debit card, or a bank transfer. Cash is not acceptable (though Argentine hotels often provide cash discounts).
As always, there’s a strange twist in Argentina’s new measure—it applies only to provinces with international borders. Thus, the interior provinces of Tucumán, Santiago del Estero, Santa Fe, Córdoba, San Luis and La Pampa will not benefit from it. All these provinces probably draw more in-country visitors than foreigners, but Córdoba, San Luis and Tucumán especially could be at a disadvantage to neighbors which do have foreign borders.
One final note. The current issue of Condé Nast Traveler misleadingly says that “Argentina did away with its 21 percent hotel tax for foreigners.” This is simply wrong—there never was a hotel tax for foreigners, and Argentine tourists and residents will still be on the hook for that 21 percent IVA (presuming they’re not paying cash under the table).