Some time ago, I wrote a post that touched on the topic of so-called Peronist cuisine, which almost seems an oxymoron—the working-class followers of Argentina’s legendary strongman Juan Domingo Perón were not exactly known for their culinary sophistication. Still, there’s a stereotypical roster of basic dishes that appeal to the so-called descamisados (shirtless ones) who comprise(d) the Peronist base (perhaps as Kentucky coal miners might appreciate Donald Trump’s overcooked steak with ketchup). 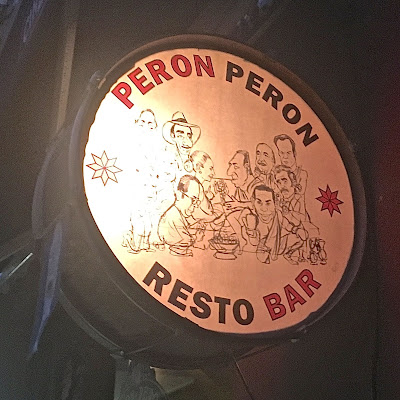 Last week, I decided to try the fare at Palermo Hollywood’s Perón Perón, in an area that’s not home to many descamisados, and is walking distance from our own Palermo apartment. One might argue that it’s an Argentine analogue to Tom Wolfe’s “radical chic,” with middle-class diners indulging themselves with somewhat more sophisticated versions of working-class comfort food. When I arrived around 7:30 pm, relatively early by Argentine standards, a BBC film crew was interviewing chef Gonzalo Alderete Pagés, who spoke more than passable English.
I was pleasantly surprised with the food. The menu does feature a lot of heavy comfort food such as guiso de mondongo (tripe stew) and various incarnations of milanesa (chicken-fried steak), but I chose to go vegetarian with canelones de acelga (chard cannelloni; I really like chard, and my late mother-in-law made terrific chard pie even though she wasn’t much of a cook otherwise).


The oddest item was an asparagus empanada, which aroused my curiosity as I’d never heard of such a thing before; it was fried but not too heavy, though I would have preferred a bit more asparagus in it. My glass of Domingo Hermanos Malbec came chilled, which is how my late father-in-law took red wine (as do many other Argentines). The wine list focuses on vintages from the Andean Northwest. For dessert, I had a satisfying rich dark chocolate mousse.
I should add that the service was surprising good, which is not something you anticipate from a movement that prides itself on labor militancy (spoiler: they were all wearing shirts). The décor, of course is a shrine to Perón and Evita (and their would-be successors Néstor Kirchner and Cristina Fernández de Kirchner), and thus more than a bit kitschy. I’d happily go back, but I think I might prefer winter when I could order something like locro, a northern Andean stew whose warm heaviness would be welcome in cooler weather (though this spring has been mild in town).

Posted by Wayne Bernhardson at 4:45 PM No comments:

Just over two weeks ago, just before flying south to Buenos Aires, I visited the bank to withdraw US$2000 in large bills—fifties and hundreds. Other things being equal, I’d rather not carry that quantity of cash, but in Argentina it’s an issue of economic convenience, if not necessity. For longer than I care to remember, the manipulation of exchange rates by the country’s previous government required extra-official work-arounds to avoid punishing prices and inflation (which, in fairness, have not ceased under the current government).
The perils of stashing bags of cash aside, changing money here long required seeking informal currency change sites, known as cuevas (“caves”) rather than banks and their ATMs, where one could only obtain the disadvantageous official rate. Cuevas paid the so-called blue dollar rate which, at times, was nearly double that. They did not charge a commission, and did not require waiting in line at a bank or formal exchange house.

There were shorter lines and less bureaucracy at bank ATMs, such as the one at my corner bank in Palermo, but there was still a penalty for using them. Of course, my US home bank would charge a percentage for each transaction and, moreover, the Argentine bank would collect an even larger fee.
Since arriving here, I’ve usually changed at my neighborhood cueva—there are fewer these days, but they’re still around—where a grumpy old man disappears into the depths of his office and returns with the pesos I need. Friday night, though, in the interest of thoroughness, I chose to use the ATM at the corner. After entering my PIN, I had to choose how much money I would withdraw, and chose “Other” because I wanted more than the A$2000 (about US$114) amount indicated on the display
It was not to be. When I entered the figure of A$3000 (about US$170), the machine rejected it. When I reduced the number to A$2500 (US$143), it did the same. When I capitulated to the original A$2000, it proceeded, but then informed me it would impose a charge of A$106.20 (US$6.08, or 5.31 percent).
In Chile, I regularly withdraw amounts of Ch$200,000 (US$319 at today’s exchange rate), and in Uruguay I’ve withdrawn similar amounts in US dollars (which is not possible at Argentine or Chilean ATMs). There is, of course, a one-time charge for each withdrawal, but as a percentage of the total amount that’s relatively small. In Chile, for instance, the charges range from Ch$4000 to Ch$6000 (roughly two to three percent in the case of the withdrawal above).

In many ways, Argentina is more visitor-friendly than it was recent years, but the banks’ continued insistence on multiple transactions and high commissions is not. Note also that, despite legal requirements, many Argentine businesses (including restaurants) still evade their obligation to accept credit cards in payment for services. They will often accept payment in US cash, but often at a lesser rate.

Posted by Wayne Bernhardson at 3:57 AM 8 comments:

Back at BA's Food Fair, the Feria Masticar

Last weekend – Friday afternoon, actually—I trekked across Palermo to the annual Feria Masticar, a showcase of food and drink that takes place in the fairground-style enclosure in the barrio of Colegiales. I had lunched in Colegiales just the day before, on Cantabrian cuisine in the Centro Montañes, but the Masticar is a more innovative and diverse event.
I’d never considered its etymology, but word masticar literally means “to chew.” In lunfardo slang, though, it can also mean to think or talk something over, rather like the English phrase “chewing the fat,” to use a gastronomic metaphor. The Feria’s a four-day event, and the lines to enter and eat can both get long on Saturday and Sunday, but it wasn’t bad when I arrived about half an hour after the 2 p.m. opening (one complaint: approaching from the south side, I had to walk around most of the sprawling enclosure to reach the single entrance, and do the same on departure to get back home).


Some friends I’d spoken with showed little interest in the event, partly because of the 130-peso admission charge (about $7.50) just for the privilege of snacking on small plates. After paying, it became necessary to buy at least one booklet of scrip for 300 pesos (about US$17; the vendors supposedly do not accept cash, though I recall paying a small bill in pesos a few years back). This is something of a nuisance since, if you have any scrip left over, you need to stand in line for a cash refund on leaving). There are also stands of fresh and packaged produce, such as cheeses and jams.
I bought the minimum, but the first item that caught my eye was a free sample of hard draft cider at Sidra 1888. Though Argentine cider doesn’t enjoy the notoriety that wine does, it’s a great option on a hot summer’s day, and I’d definitely take a bottle home if I had someone to share it with these days (I can’t drink an entire bottle of fizzy alcohol on my own; for what it’s worth, I usually go for the cider at San Telmo’s Bar El Federal). The apples come from Patagonia’s upper Río Negro valley.
Given that some of the city’s top restaurants have booths or trucks here, the Masticar provides the chance to sample them without spending a fortune. I’ve dined at Palermo Soho’s Crizia before, but I couldn’t resist their small combo of raw oysters and a Puerto Madryn prawn. It wasn’t exactly filling, but it was satisfying.
Conscious of overspending—I didn’t want to buy another packet of scrip—I strolled the grounds in search of bargains and, though it wasn’t an especially hot day, I worked up a thirst that I satisfied with an organic blueberry juice from Purificare. Half a liter of this was pretty filling and, after a short breather, I strolled past the previously unknown (to me) Peugeot Lounge, where I spotted an irresistible pistachio flan with a dollop of dark chocolate. It wasn’t large either, but it was deliciously filling and also consumed the last of my scrip.

On the way out, I realized I had overlooked the food truck from iLatina, a Colombian restaurant I’ve been meaning to try for years, but maybe after my wife arrives at month’s end we’ll look into it. Even then, I left satisfied with the Feria, and won’t hesitate to return in future years (this was my third Masticar, including 2012 and 2016).

Posted by Wayne Bernhardson at 3:15 PM No comments: