A Coastal Road Trip, From Canada to Chile?

Often, on this blog and elsewhere, I’ve pointed out that the west coast of South America is a mirror image of its North American counterpart, with vast deserts comparable to those of Baja California, a Mediterranean heartland resembling California, and mid-latitude forests and fjords in higher latitudes.

One of the comparisons I make, in the course of writing and lecturing, is between British Columbia’s Vancouver Island and Chile’s Isla Grande de Chiloé. Superficially, the comparison is obvious – they’re two large islands slightly separated from the continent, by the Strait of Georgia and the Canal de Chacao, respectively (though Vancouver Island is three times larger). 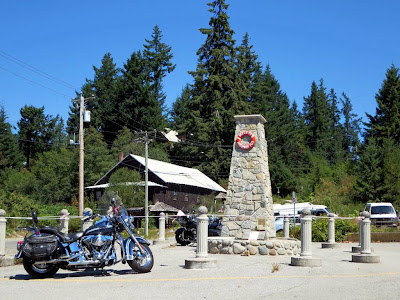 Both are lush and forested, with temperate rain forests and extensive hiking trails, but they have one thing in common that I learned only recently. My Moon colleague David Stanley, who covers the South Pacific but also overlaps with me in covering Rapa Nui (Easter Island), informs me the village of Lund (pictured above) is (in the words of a local website) “the northern terminus of Highway 101, the Pacific Coastal Highway, a 15,200 km highway along the Pacific Coast extending from Canada to Chile” (photograph courtesy of David Stanley). 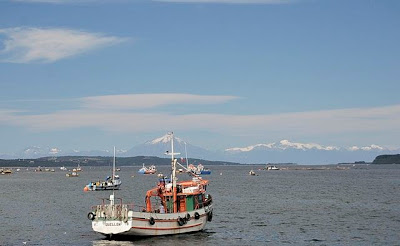 I have never been to Lund (named after the Swedish city), though I have been to more southerly parts of Vancouver Island. I have, however, been many times to the port of Quellón (pictured above), the route’s ostensible southern terminus, on the Isla Grande. I had, however, never heard of the “Pacific Coastal Route” as any sort of unified entity – in fact, US 101, which runs through Washington, Oregon and California, often heads inland while California’s State Highway 1 almost invariably sticks to the coast.

To the south, Mexico’s Carretera Federal No. 1 runs the length of the Baja California peninsula, but is not always coastal and, where it is coastal, it’s not always on the Pacific. In the rest of Mexico and Central America, the Pan-American Highway often approaches the coast but, in the words of journalist Jake Silverstein, it’s “a system so vast, so incomplete and so incomprehensible it is not so much a road as it is the idea of Pan-Americanism itself.”

There is, of course, no highway through Panama’s Darien Gap, and roads rarely follow the lush tropical lands along the Pacific coasts of Colombia and Ecuador, where most of the people live in the highlands. Peru and northern Chile are a different matter, but in Chile’s Mediterranean heartland and southern lakes region the main highways bypass the shoreline for the central valley.

I’ve never been to Lund and, though I’ll probably revisit Quellón later this year, I’ll still find it hard to think of it as the end point of any unified route – especially since there are several other ferry crossings I’ve not yet mentioned, including one that continues south to Chile’s own Carretera Austral, arguably the best road trip in all of South America.
Posted by Wayne Bernhardson at 4:47 PM

Sounds like the Pacific Coastal Highway would make an excellent road trip and the route's many hiccups might make it all the more fun to follow.

For the most part, it's certainly a doable route, but it has its risks. For all practical purposes, the Darién Gap through Panama is impossible except on foot and dugout, so any vehicle would have to take a ferry to Colombia (a much safer country than it used to be, but its segment of the Gap is still dubious).

Greetings from Castro, Chiloé. The Panamericana south from Puerto Montt and on the island is being improved and widened to 4 lanes in some areas.