Buenos Aires has two airports. Nearly all international flights arrive at and leave from Aeropuerto Internacional Ministro Pistarini, colloquially known as Ezeiza for the nearby Buenos Aires province town, about 22 km south of the city (because of heavy traffic, it’s 45 minutes from downtown, on a good day). Most domestic flights, plus flights to Uruguay, leave from 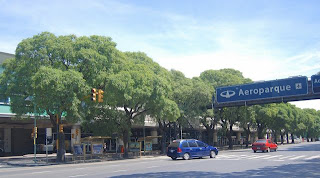 Aeroparque Jorge Newbery, the city airport on the banks of the Río de La Plata, barely ten minutes from my Palermo apartment.

Because Aeroparque is so much closer to the city, it’s much cheaper to reach than Ezeiza. A cab from downtown Buenos Aires to Aeroparque costs about US$5, while one to Ezeiza costs at least five times as much. There are cheaper alternatives, but they’re much slower and, in these times of glacially slow and tiresome airport security, nobody wants to spend any more time than necessary getting to the airport.

That’s at least part of the reason why, after mid-March, renationalized Aerolíneas Argentinas wants to use Aeroparque for regional departures to Santiago de Chile, Asunción (Paraguay), and São Paulo and Río de Janeiro (Brazil). That’s also why other regional airlines, including Brazil’s TAM, Chile’s LAN, and Uruguay’s Pluna are on the warpath, concerned that this would benefit Aerolíneas to their detriment. The ability to move its regional passengers immediately to connecting domestic flights would be another major advantage.

One could argue, of course, that Aerolíneas, with its record of unreliability, needs every operational advantage it can get to stay solvent (it’s noteworthy that none of the international airline alliances, such as OneWorld and Star Alliance, wants anything to do with Aerolíneas, whose frequent flier program has no affiliates except for some car rental agencies and a few hotels). In theory, other airlines could move operations to Aeroparque, but in practice, it isn’t big enough to accommodate them. Aerolíneas’s Aeroparque foothold is too solid for others to counter a political decision that has economic consequences.

And no one, apparently, has even mentioned the additional traffic and noise that this could bring, with more cars on the streets and more planes overflying the city. And because it’s so much smaller than Ezeiza, the risk of accidents would probably increase.
Posted by Wayne Bernhardson at 4:38 PM

One thing AEP needs is a decent rail interchange!