How Expensive is Buenos Aires?

Given the ups and downs of the Argentine economy, and its capital city, this is a question whose answer requires periodic 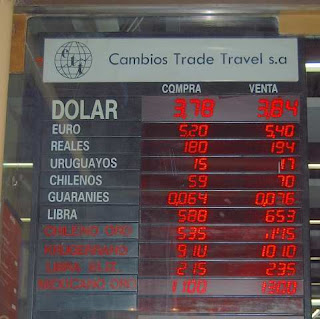 revision. The most recent answer comes from the Mercer consulting group, which last week ranked Buenos Aires as No. 112 of 143 cities worldwide for expat cost-of-living. In comparison with 2008, when Mercer ranked “Baires” 138th of 150 cities, it would seem that the city has gotten more expensive but, nevertheless, it falls in the lowest quartile of the cities surveyed. For purposes of comparison, Tokyo is the most expensive, New York City ranks eighth, San Francisco 34th, Washington DC 66th, and Johannesburg 143rd. Neighboring Chile’s capital city of Santiago ranks 128th but, with the Chilean peso’s recent rebound, I would expect the two cities may have reversed position. What does this mean in practice? In reality, for instance, public transportation in Buenos Aires is preposterously cheap. The basic fare on Metrovías, the underground system popularly known as the Subte, is 1.10 pesos - about 29 US cents (compare that with New York City’s subway fare of US$2). The standard bus fare in Buenos Aires is 1.20 pesos, on a system that operates 24 hours a day. Cab fares cost US$1 for the first 200 meters, and only 10 US cents for each additional 200 meters. Since the economic collapse of 2002, of course, prices have risen considerably. At that time, I thought nothing of inviting my several nephews out to dinner and picking up the tab. In 2009 that’s a lot harder but, nevertheless, today I enjoyed an exceptional three-course lunch, with a glass of wine, at Belgrano's Lotus Neo Thai (the city’s top Thai restaurant, and one of few places where it’s possible to get truly spicy food) for about US$12. Still, for some things, you’ve got to pay. As shopping expert Patricia O’Shea, the Irish-Argentine co-owner of Hotel Home Buenos Aires, told me this morning, visitors who buy cheap goods such as bargain leather jackets may find their purchases will literally unravel. Quality goods, she says, will be not be cheap, but they will be cheaper than their overseas counterparts - and they’ll last a lifetime. One recent development, though, threatens to make the country more expensive. Only a short time ago, when I went to the corner bank, the ATM told me it would charge me 11.46 pesos (about US$3.50) for my withdrawal of 300 pesos (the maximum allowable transaction, less than US$80). I rejected this withdrawal, from the Banelco system, and went to a nearby Link ATM that did not collect the charge. Still, banks tend to ape each other, and it wouldn’t surprise if this becomes universal. According to my contacts in Santiago, ATMs there have recently begun to impose a fee of 2000 Chilean pesos but, at least, ATM users can take out larger amounts of cash than in Argentina.
Posted by Wayne Bernhardson at 7:12 PM

Wayne, perhaps you lucked out? An excerpt from this entry on the Argentine Post:

"But tonight, for the first time since I came to Argentina in 1995, a local bank charged me a $3 fee to withdrawal cash from an overseas bank. The fee is in addition to whatever fee my bank charges in the U.S.

I withdrew the money from a “Link” network at a local branch of Banco de la Ciudad. I haven’t had a chance to test other banks or see if Banelco (Link’s competitor) is also charging a fee."

It looks like some Link ATMs are already charging the fee.

I read that comment as well, and we'll have to see how it plays out. It's likely to be a much greater nuisance in Argentina, given the absurdly low withdrawal limits, than in Chile.

Oh! It is really very expensive, thanks for telling us about this.

The withdrawal limit seems to be the more tedious aspect for travelers. As I start to think of options, I wonder, do banks even accept travelers checks anymore?

In researching our trip, we've found that estancias only accept cash, especially asking for money to be wired to a bank account for a deposit. Is it just me, or does this sound fishy?

Is the $80 ATM withdrawal limit per transaction or per day? Thanks.

I'm updating my own question; I found some tripadvisor posts that stated it's a per-transaction withdrawal limit.

Do most non-five-star hotels accept credit cards or require cash?

How about the average merchant? We use our credit card a lot in the US, but maybe cash is king in Argentina?