In a post early last year, I noted the shortages of coins in Argentina, and Buenos Aires in particular, which had made it difficult to pay for 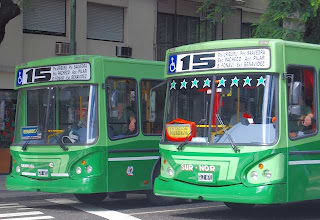 In the elections, which will take place this coming Sunday, many observers expect the government to lose control of the lower house and suffer a reduced Senate majority, but they hope to cut their losses. One of their tactics is the hastily introduced transport measure - SUBE cards began to be distributed last Friday - that has become common in other countries. For several years now, Santiago de Chile’s Transantiago system, which includes the Metro (underground) and city buses, has had a similar system, but Buenos Aires has lagged far behind.

Whether this will be the electoral help the government hopes for is another question. In fact, the Subte, a few city-wide and suburban bus lines, and a couple suburban rail lines have had similar cards for a while; though this one unifies those systems, it’s still useless on most of the buses. Not only that, but distribution of the SUBE cards has been so slow that only 50,000 will be available before election day. Worse yet, according to the Buenos Aires daily Clarín, the cards - which are supposed to be distributed free of charge - are apparently being sold in the street.
Posted by Wayne Bernhardson at 10:05 AM