Natales and the Ferry

In Puerto Natales, a town of about 18,000 (pictured below), the arrival of the weekly ferry from Puerto Montt is a big deal. Not only does it bring passengers to fill the city’s hotels, B&Bs, and hostels before their departure for Torres del Paine and other points, but it also carries freight, including perishables that let local restaurants and households supplement their menus in a region whose climate limits the amount of fresh produce that can be grown here. 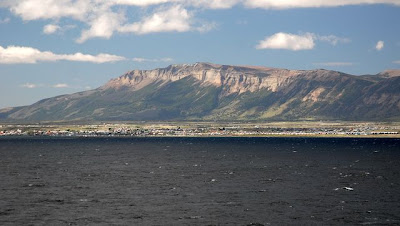 Thus, when the Navimag ferry Evangelistas struck an islet in the Canal Sarmiento on the last leg of its most recent southbound voyage, it had major repercussions in Natales. There will be no boat this week but, according to an email I received from Navimag management in Santiago, the Puerto Edén will replace the Evangelistas on the voyage scheduled to leave Natales on Tuesday the 15th. This would mean that the Puerto Edén will sail from Puerto Montt on Friday the 11th, arriving here on the Monday the 14th.

The Puerto Edén, unfortunately, is a much smaller vessel that carries only about 160 passengers and far less cargo, so it may not be able to accommodate everyone who had a reservation either northbound or southbound. While not so comfortable as the Evangelistas, which can carry around 300 passengers and has expansive common areas, it’s still an acceptable alternative for those whose primary goal is to see the scenic fjords of the south. 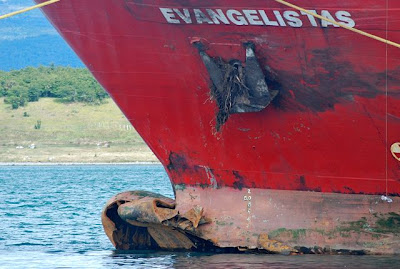 Meanwhile, according to personnel I spoke with at the Natales pier yesterday, the Evangelistas will remain here for a week as a crew comes in to replace a damaged propeller that made one motor inoperable, and to make emergency repairs to the hull (pictured above) that will let it return safely to Puerto Montt or perhaps even Valparaíso. Later this afternoon, a trucker who's been waiting patiently told me he heard the ship will sail north on Tuesday, with freight but without passengers (he will have to fly to Puerto Montt to meet it there). How long it will remain on the disabled list remains to be seen.

To the Fjords of Fuegia
From tomorrow, I will be semi-incomunicado as I take a week-long semi-breather on the new Stella Australis, a 210-passenger cruise ship that recently made its debut on the route from Punta Arenas to Ushuaia and back. While I’ve done this route several times before, I’m looking forward to the new ship and, with some luck, yet another landing at Cape Horn. The weather forecast is a little iffy but, in any event, I will also be spending an unfortunate amount of time in my cabin, starting to put the final touches on the manuscript of the new edition of Moon Handbooks Patagonia. On a free day in Ushuaia, I should have a chance to make another post.
Posted by Wayne Bernhardson at 7:29 AM