In 1979, when I first visited Chile, one of my most memorable excursions was an overnight trek to the slopes of Volcán Puyehue, a stratovolcano that, as part of the Puyehue-Cordón Caulle Volcanic Complex, produced a massive 1960 eruption shortly after the historic Valdivia earthquake (at 9.5 on the Richter scale, the most powerful ever recorded). Continuing for two months, that eruption (depicted in the NOAA photograph above) left a landscape that, despite a marine west coast climate comparable to Seattle or Portland, was no less barren than the Atacama Desert. 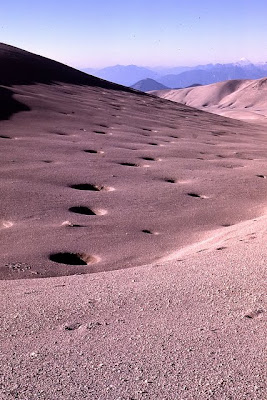 At a time when Chile received few foreign visitors, I saw nobody else even along the trail's wooded lower slopes, slept in a comfortable national park shelter, and soaked in rustic thermal baths, all the while photographing sights such as the geometric fumaroles and massive lava flows left by the eruption nearly two decades earlier. Since I did it, the Puyehue trek has acquired a certain popularity for its scenic grandeur and its easy accessibility on the international highway from Osorno to the Argentine lakes district resorts of Villa La Angostura and San Carlos de Bariloche. 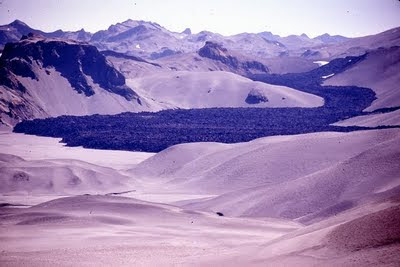 At the moment, though, this route is closed, and not just because of early winter snowstorms. On Saturday, the Córdon Caulle erupted with pumice and ashfalls that forced the evacuation of some 3,500 people, and closed the highway between Chile and Argentina (some footage on Chilean TV showed policemen hefting stones of lightweight pumice now scattered along the road over the Andes). Guests at the historic Hotel Termas de Puyehue, a classic hot springs resort within Parque Nacional Puyehue, were among the evacuees. 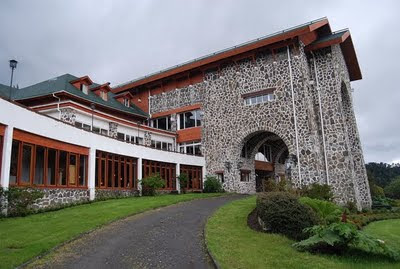 According to MercoPress, the ashfall has also left Bariloche beneath a film of gray; city residents were advised to stockpile water and wear surgical masks if they needed to go out, to avoid breathing the ash. Parts of Argentina’s Ruta 40 were 30 centimeters (about 12 inches) deep in ash, making driving inadvisable. It also obliged Argentine authorities to suspend flights and close airports at Bariloche, San Martín de los Andes, Neuquén, Esquel and even the Atlantic coast city of Trelew.

Originally, the column of steam and ash reached an altitude of ten kilometers (roughly 30,000 feet) but, as of Sunday, it had subsided. Presuming it continues to subside, the economic disruption should be minimal but, if it continues, it could have a high cost. After the Libertadores pass between Santiago and Mendoza, the Cardenal Samoré pass is the second-busiest border crossing between the two countries, both for commercial and tourist traffic.

Many Chileans spend the weekend across the border but, more importantly for Bariloche, Villa La Angostura, San Martín de los Andes and Esquel, ski season is about to begin. If flights from Buenos Aires and Brazil can’t land anywhere in northern Argentine Patagonia, it won’t matter how much snow falls at Cerro Catedral, Cerro Bayo, Chapelco and La Hoya.

Help Reactivate the Economy, with Southern Cone Travel
If you have found this article informative, please consider clicking on one or more of the AdSense links that accompany it - always presuming, of course, that it’s a product or service that interests you.
Posted by Wayne Bernhardson at 10:56 AM

Fortunately, up to now NO ashes have fallen on our Esquel / La Hoya / Los Alerces area. But the local ski season issue is anybody's guess, even if a significant part of the skiers come from within the region (Comodoro Rivadavia, Trelew, P. Madryn, etc). But without flights, it seems we will lose many La Hoya fans from Brazil, Buenos Aires, and northern Argentina!