Overpopulation of What? The Horses of Easter Island

In his book Collapse: How Societies Choose to Fail or Survive, 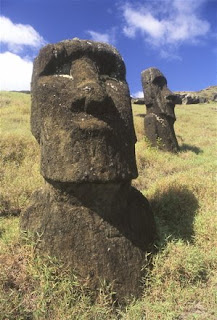 UCLA geographer Jared Diamond uses Rapa Nui (Easter Island) as an example of environmental disaster brought on, at least in part, by overpopulation. In a 2006 interview with Geographical Magazine, Diamond describes the abandoned quarry of moai (the island's iconic statues) at Rano Raraku (pictured here) as suggesting that "You get the sense that you've walked into a factory, and at 11.59 a.m. the whistle blew, everyone dropped their tools, went for lunch and never came back." This he attributes to environmental degradation on an island of only 171 square km (66 sq miles) ,with a population of 15,000 that denuded once dense forests. Diamond makes a strong case for his thesis, though it's arguable that the island's dysfunctional politics - a priestly class that demanded the construction of the moai and their platforms, and used timber to move them into place - keeps this from being an issue of population alone.

Today the island has only about 4,000 residents, whose livelihood depends on tourism and subsidies from the Chilean government, and it still has environmental problems. In the 2007 calendar year, according to statistics provided me by the Chilean tourism agency Sernatur, more than 50,000 visitors landed at the local airport - more 12 times the island's population. In this context, Chilean and local authorities have begun to monitor visits to archaeological sites such as Rano Raraku ever more closely, but one thing remains out of control: this subtropical oceanic island has, according to numbers I heard, as many as 10,000 horses - more than two per resident - further denuding the island's already impoverished flora.

Whether or not those figures are accurate, the accompanying photograph, also taken at Rano Raraku, suggests how destructive the horses have been. They are also devouring the reeds in Rano Raraku's crater lake and, as they gallop through the moai "nursery," are likely to do far more damage to the statues in situ than any well-monitored tourists are.
Posted by Wayne Bernhardson at 6:51 PM