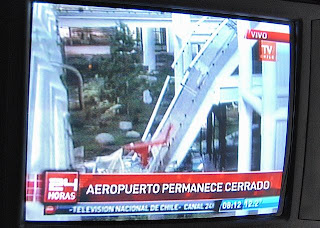 km south of the capital of Santiago, suffered the greatest magnitude earthquake ever recorded - 9.5 on the Richter scale - and much of the country suffered from a subsequent tsunami. Early this morning, the city of Concepción, about 500 km south of the Chilean capital, came dangerously close to that number, being hit by a temblor measuring as high as 8.8 hit. In this region, where many city inhabitants still use wood for cooking and heating, the danger of fire is as great, or greater, than that of falling buildings.

Fortunately, so far at least, the death toll of 78 is far lower than might be expected in other, more densely populated parts of the world - Santiago, Chile’s only megacity, is distant from the apparent epicenter. Nevertheless, Santiago’s Aeropuerto Internacional Arturo Merino Benítez (pictured above) suffered enough damage in the passenger terminal - fallen walkways and many broken windows - that it’s closed until further notice. Authorities are diverting flights to other Chilean airports and to the Argentine city of Mendoza, just across the Andes from Santiago.

Likewise, several overpasses have collapsed along Ruta 5, the country’s main north-south highway, and other roadways have bent or buckled - the television network TVN has shown cars hitting unexpected bumps at high speed but, to this point, none of them has lost control. Over the past couple decades, the quality of anti-seismic construction here has improved, but there are vulnerable older buildings in neighborhoods such as Barrio Brasil, where the Basílica del Salvador - damaged in a 1986 quake - has been propped up by a bulwark that collapsed yesterday and demolished automobiles parked alongside it.

Apparently the quake has had a lesser impact on tourist-oriented areas such as the southern lakes district, around Puerto Varas and Puerto Montt, though it was felt there. Other major destinations, such as San Pedro de Atacama and Torres del Paine, are well beyond the damage zone.

Because of the epicenter’s depth, there appears to be little chance of a tsunami along the Chilean coast, but the quake could trigger big waves in North America and across the Pacific. On the Juan Fernández archipelago, about 600 km off the Chilean coast, a mini-tsunami has apparently forced the inhabitants of San Juan Bautista, the only town, into the nearby hills.

The United States Geological Survey has just published an online summary of the quake, which has been followed by aftershocks as high as 6.9. The National Oceanic and Atmospheric Administration has issued a tsunami advisory for coastal California and Alaska, and a tsunami warning for the state of Hawaii.
Posted by Wayne Bernhardson at 4:13 AM

Apparently, it was felt here in BA as well, by some - and quite a few taller buildings were evacuated, though I have to admit, we neither felt it nor knew about it until seeing the news this morning.

Heard from a couple of clients who are locked up in the airport Sheraton in Santiago - apparently in a truly brainy move, the immigration officials confiscated the passports of anyone in transit who was stuck in the airport waiting for a flight that didn't have a Chilean visa, because since they couldn't process entry visas with the computer systems down, this is their way of making sure no one "enters the country illegally."

Thank you for your information on the Torres del Paine areas. My daughter and friends have been backpacking there over the past week while on a break from Universidad Adventista del Plata. If they stayed with their itinerary they should be back in El Calafate Sunday or Monday to fly to BA.
Thank you again.

Thanks for your information on the Torres del Paine area. My daughter and friends are treking in the park there and I know it is a long way away from the epicenter, but it was still concerning to me at home in the US.
If they stuck with the itinerary they should be able to contact me from El Calafate Monday! These are exchange students from the Universidad Adventista del Plata on a break.

My daughter is currently trekking some where at Torres del Paine with a group of friends. Reading you blog that that area is too far from the damage area is reassuring since we have no means of communicating with her.
Thank You

El Calafate is on the Argentine side of the border, in southern Patagonia, and is nowhere close to the damage zone.

I have been planning on visiting the Patagonia region of Chile this coming week. Does anyone know if this is possible or is travel in the area unrealistic? Thanks

In Patagonia proper, there should be no problems whatsoever - the problem may be getting there. Presuming you are going through Santiago, the international airport is closed until, at last report, this coming Wednesday. The roads south of Santiago have suffered damage, but if you are flying on to, say, Punta Arenas, there should be no problem whatsoever. Without knowing the details of your itinerary, though, I can't say for sure.

we are planning to go to Chiloe and Patagonia in April 2010. Would that be possible? Can you pls advice

Latha, I just had a note from a friend in Ancud (Chiloé) that they felt the quake but suffered no damage whatsoever. The question is whether you would travel overland (the roads are damaged south of Santiago, but buses are now running) or by plane (demand figures to high for flights).

There should be no obstacles whatsoever to traveling in Chilean Patagonia, which is far from the damage zone. I would think April would be no problem, subject to any further developments of course.

Wayne, you've taken a load off our hearts. As of now, we have bookings on flights to Puerto Montt and Punta Arenas. Trust this is fine. Of course, we have to hope the Santiago airport will be up and running by then.

Also, we are reaching Puerto Montt from Santiago at 2.40 pm. I understand we have to go to Castro from there. Given the time of our flight landing, would it be advisable to stay the night in Puerto Montt or is it ok to push on to Castro? We currently hold hotel bookings in Castro from that night onwards. Pls advice

Does anyone know what the status of the people who were on the Air Canada flight who are locked up at the Sheraton in Santiago? I spoke with Foreign Affairs in Canada and they said they are not doing anything to get the passengers out of Santiago. Also, I can't get any answers from Air Canada. I know my family is safe but I would like to know when they will be able to leave the country. I'm also concerned about looting....

Andy, I have only heard something vague about the Sheraton, that there were people there without Chilean visas who were confined there, but I know nothing more than that. I would not worry about looting anywhere that tourists are, however - those areas are about as safe as you can get, and the looting has been confined pretty much to Concepción and vicinity, where there are few tourists.

Wayne, I sent this on 1st but haven't heard from you. Would appreciate your advice.

We are reaching Puerto Montt from Santiago at 2.40 pm. I understand we have to go to Castro from there. Given the time of our flight landing, would it be advisable to stay the night in Puerto Montt or is it ok to push on to Castro? We currently hold hotel bookings in Castro from that night onwards. Pls advice

Latha, there should be no problem in getting to Castro that evening, as buses from Puerto Montt are frequent. If you have to stay for some reason, nearby Puerto Varas, on Lago Llanquihue, is more pleasant than Puerto Montt.