Punta Arenas, Antarctica, and the Humpback

In the city of Punta Arenas, on 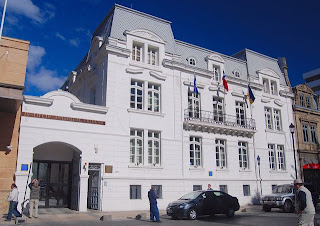 the east side of its central Plaza Muñoz Gamero, a white block building with a Parisian mansard has long housed the Instituto Antárctico Chileno - but not for much longer, apparently. According to Montevideo-based Mercopress, the regional government of Magallanes will soon build a US$30 million International Antarctic Center, to include the Instituto’s offices and laboratories, along with a museum chronicling Chile’s Antarctic presence.

That presence dates from 1916, when the Chilean cutter Yelcho, whose prow now overlooks the harbor 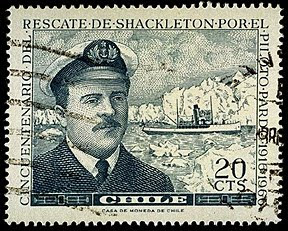 of Puerto Williams, rescued British explorer Ernest Shackleton’s marooned crew from Elephant Island, in the South Shetlands. In an unheated vessel, in mid-winter, pilot Luis Pardo Villalón (pictured here in a commemorative postage stamp) survived collisions with icebergs to get there. The Yelcho’s return to Punta Arenas gets a cameo appearance in British director George Butler’s The Endurance, an extraordinary documentary of Shackleton’s expedition.

Today, Punta Arenas is one of Antarctica’s main gateways, though the Argentine port of Ushuaia is a day’s sailing closer to the Antarctic Peninsula and most cruise ships leave from there. At the same time, there are regular Aerovías DAP flights from Punta Arenas to the Chilean “settlement” of Villa las Estrellas on Isla Rey Jorge (King George Island) , where it’s possible to board a small cruise ship without suffering the ultimate seasickness experience of the infamous Drake Passage.

Chile built Las Estrellas, which includes a school, a hospital, a hotel, a bank and a post office, to support its Antarctic claims. While it has civilian residents, in reality it’s part of the Base Presidente Eduardo Frei Montalva, an air force base that would not exist without government support. Only 200 meters from Russia’s Bellingshausen Station, it sits in territory also claimed by Argentina and Great Britain (whose Antarctic claims differ slightly from those of Argentina and Chile). By the Antarctic Treaty of 1959, all such territorial claims are on hold, but that doesn’t mean they couldn’t become significant at some point in the future.

Meanwhile, closer to the South American continent, the 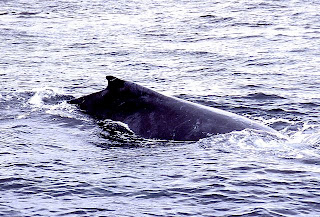 Global Environment Fund has declared its intention to build a new research center on Chile’s Isla Carlos III, the whale-watching center of the western Strait of Magellan. Chile has been one of the strongest voices for whale conservation within the International Whaling Commission.

Part of the Parque Marino Francisco Coloane, Chile’s first maritime national park, Carlos III lies just off the main feeding grounds of the southern humpback whale, and has been home to an eco-camp of geodesic domes for several years now. Other operators also take groups to the park, with accommodations aboard ship. It takes most of a day to reach Carlos III from Punta Arenas, followed by a full day on and around the island, and a morning’s sightseeing before returning to Punta on the third day.
Posted by Wayne Bernhardson at 3:13 PM