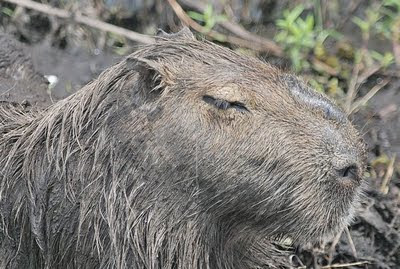 I first saw a capybara, a rodent roughly the size of a Rottweiler, on a 1976 boat trip down the Río Napo, an Amazon tributary in the Oriente region of Ecuador. Along with several other gringos, I was a passenger on a motorized dugout from Misahuallí to the then remote oil camp of Coca, through a lush, humid tropical rainforest environment. One of the most exciting things we saw was an enormous capybara dog-paddling from the river’s southern shore toward the north.

We grew even more excited, or rather alarmed, when the dugout's crew turned sharply and began to club the animal with their oars (on board in case the motor failed). For the passengers, most of us Europeans, the capybara was an exotic animal whose sighting was something unique in our lives; for them, living in the rainforest, it was dinner. 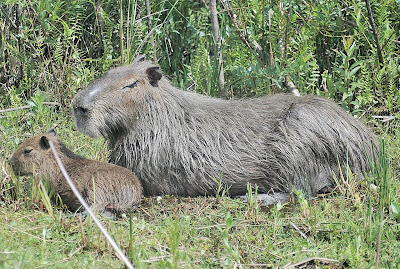 Since then, I’ve seen hundreds if not more capybaras, most notably in Argentina’s Esteros del Iberá wetlands, where they tamely graze the lawns at Estancia Rincón del Socorro and the visitors center at the provincial reserve. I’ve never even seen them in a zoo elsewhere, so I was surprised to read that, according to the San Luis Obispo Tribune, a carpincho (to use the Spanish word) has been sighted in the California town of Paso Robles. It’s believed to be an escaped pet, though it’s not legal to keep capybaras in California.

Apparently that’s alarmed some people, but it shouldn’t. Despite its size, the capybara is an innocuous herbivore that keeps a respectful distance from human beings – as you might if a riverboat crew ever thought of clubbing you on the head. It’s worth mentioning that, in Argentina, they are bred in captivity, with their spotted leather highly prized for clothing and coverings for souvenir items such as mate gourds. 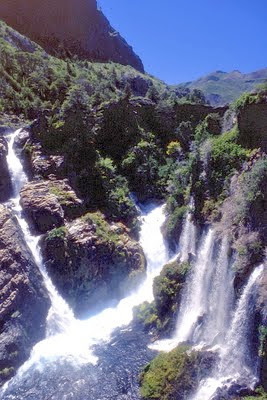 While traveling to southern Chile, I have always spent an overnight at the gracious German guesthouse El Rincón, just north of the city of Los Ángeles (about 500 km south of Santiago, close to Parque Nacional Laguna del Laja, pictured above). Last month, though, its host Winfried Lohmar died suddenly and his widow Elke has decided to sell the property. It’s a lovely house, on wooded grounds with extensive vegetable gardens, and suitable to continue as accommodations or for another purpose. 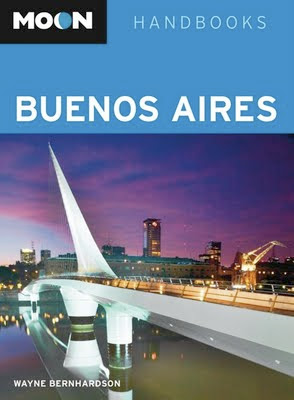 Tomorrow, August 20, will mark the second of several digital slide presentations on the fourth edition of Moon Handbooks Buenos Aires, at various branches of the San Mateo County Library. The Saturday event starts at 2 p.m. at the Atherton Library (2 Dinkelspiel Station Lane, Atherton, CA 94027, tel. 650/328-2422). There will be ample time for questions and answers, and books will be on sale.

As I mentioned earlier this week the town of Atherton, one of the Bay Area’s wealthiest communities, has strong South American connections – Massachusetts-born Faxon Atherton, for whom the city is named, spent 27 years as a merchant in the Chilean port of Valparaíso, married a Chilean woman who gave him seven children, and lived in California from 1860 until his death in 1877. He also owned large tracts of present-day Hayward and Watsonville.

Help Support Southern Cone Travel
If you have found this article informative, please consider clicking on one or more of the AdSense links that accompany it - always presuming, of course, that it’s a product or service that interests you.
Posted by Wayne Bernhardson at 7:44 AM