Flying to the Falklands, on a Budget?

Other than taking a Royal Air Force charter flight from the United Kingdom, an occasional cruise ship around the Horn, or your own yacht, the only realistic way to reach the Falkland Islands is by air. Since the 1990s, LAN Airlines has operated a weekly flight from the southern Chilean city of Punta Arenas (pictured above) to the Islands’ Mount Pleasant International Airport (a distance of roughly 530 miles, taking about 1-1/2 hours; ; the photograph below, which I took an earlier LAN flight, is New Island, the archipelago’s westernmost outlier). 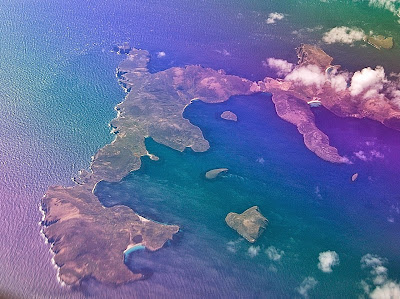 Briefly, LAN flew twice weekly, until the Argentine government tightened conditions for overflying its airspace and prohibited charter flights from Chile because cruise ship lines preferred the simplicity of turning over their passengers and crews there rather than in the Argentine port of Ushuaia. Once a month, Argentina obliges LAN to make a stop at the nondescript southern Argentine city of Río Gallegos, which has caused some curious distortions in the logistics and economics of reaching the Islands (which are only about 460 miles from Gallegos). 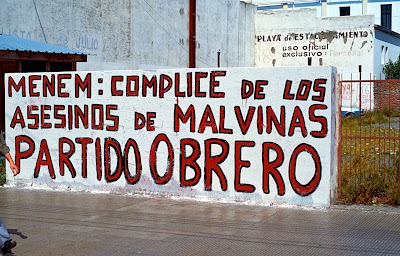 I have never flown to the Islands via Río Gallegos, but my understanding is that fairly few passengers board the plane there or disembark on the following week’s return flight. The major exception is humanitarian visits for veterans who fought in the 1982 South Atlantic war between Argentina and the United Kingdom, and for families of Argentine soldiers who died and are buried there. Because of its persistent irredentist claim to the Islands, Argentina refuses to permit the repatriation of their remains to the continent; the graffiti in the photograph above, taken in Río Gallegos in 1990, blames the conciliatory then president Carlos Menem for Argentina’s failure to reclaim the Islands after the war.

Despite the inconvenience of Río Gallegos, there may be an economic advantage to flying out of there. According to search I did on LAN’s website, the round-trip fare from Punta Arenas is US$818, while the comparable fare from Río Gallegos is US$891 (subject to a detail which you may read in the penultimate paragraph of this post).

There may be a way around those high fares, though. Because of Argentina’s claim, it considers such flights to be within its own territory, rather than international flights, at least in theory. I recently asked a travel agent friend in Buenos Aires to price the Río Gallegos route for me, and she came up with a figure of 1731 pesos, which would be US$297 at Friday’s official rate. With pesos purchased in the informal “blue dollar” market, it would cost the equivalent of just US$181. Either is a pretty good deal, especially compared with the advertised prices.

A word of caution: If you’re arriving from the Islands to Río Gallegos, whether or not you flew out of there, insist that Argentine immigration officials stamp your passport. Because Argentina considers this a domestic flight, they sometimes refuse to give exit or entry stamps, and this could cause problems down the line. In the former case, leaving Argentina at another border crossing, you could be cited and fined for overstaying your visa, depending how long you were there before visiting the Islands; in the latter case, you would have no proof of having entered the country, and could be considered to have done so illegally.

Ironically, according to LAN’s website, the Argentine government collects a new 20 percent international airfare tax on its own citizens traveling to the Islands to discourage capital flight. My translation of the Spanish language text follows: “After March 18, 2013, we must apply the 20 percent surcharge on international flights established in General Resolution No. 3450/2013 of the Administración Federal de Ingresos Públicos [AFIP, analogous to the IRS in the United States or Inland Revenue in the UK]. This is detailed under additional ‘Charges and Taxes.’”  That brings the total to US$1,051, in theory, for an Argentine traveling to the Islands.

How exactly this may work out in practice, I hesitate to say because of the sheer unpredictability of the Argentine bureaucracy but, for anyone who wants to visit the wildlife-rich Falklands on a budget, it’s worth looking into.
Posted by Wayne Bernhardson at 1:06 PM

As a lawyer I find it astonishing that the Argentine tax authorities seems to have issued more than 3000 resolutions by March 2013. That's part of the problem right there.