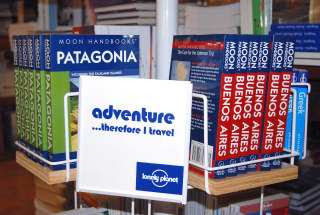 While walking around Ushuaia this afternoon, I stopped at Boutique del Libro, a bookstore that specializes in Patagonia and Antartica. It was gratifying to find that they have 100 copies of Moon Handbooks Patagonia in stock, as well as copies of the first edition of MH Argentina, though a new edition is just out; and MH Buenos Aires. Normally when I visit Ushuaia, I sign all the copies and, when I revisit the next year, I find that at least they've sold all the ones I signed. Today, though, I didn't have time to sign nearly 150 books.
Posted by Wayne Bernhardson at 6:51 PM