South America’s west coast is the mirror image of North America’s, and the archipelago 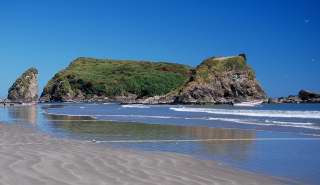 of Chiloé has a geography similar to British Columbia's Vancouver Island - a stunning, densely forested Pacific coastline that alternates rocky headlands and seemingly endless beaches. Like Vancouver Island, Chiloé has a climate that can make drizzly Vancouver or Seattle feel like the Mojave Desert.

That’s not been the case since I arrived yesterday in the city of Ancud, on a blindingly sunny afternoon looking across its namesake bay. Today, according to an online weather service, the temperature reached 24° C (75° F), but with no wind it seemed at least five degrees warmer. I took advantage of the brilliant morning to drive to the oceanside locale of Puñihuil (pictured above), where the Monumento Nacional Islotes de Puñihuil is one of Conaf’s smallest protected areas - only nine hectares of offshore islands.

Those islands, though, have something the Pacific Northwest can’t match. Here is where the ranges of the Humboldt penguin (which extends farther north) and the more southerly Magellanic penguin overlap, and their summer breeding colonies are almost side by side. In fact, the two species resemble each other, but side by side it’s fairly easy to distinguish them.

I arrived fairly early at Puñihuil, where Chilote divers and fishermen who can’t take locos 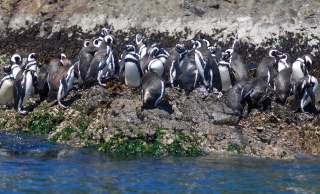 (abalone) at this time of year supplement their income by shuttling tourists out to the islands to view the penguins (the Magellanics appear in the photo here), four species of cormorants, and other seabirds (though landing on the islands is prohibited). I was in no hurry, but soon wondered whether anyone else was going to take advantage of such a magnificent day. The half-hour tour costs only about US$7 per person, but photography is difficult in the choppy seas around the penguin colonies.

As it happened, about an hour later, the vans and buses started arriving. Still, as four of the five operators here now cooperate on filling their launches and then share the day’s earnings, there are never so many boats on the water as to disturb the birds. According to Britt Lewis, a former Peace Corps volunteer who now runs the Austral Adventures company out of Ancud, it was a free-for-all until last year, and there are hopes of bringing in the last holdout.
Posted by Wayne Bernhardson at 5:55 PM