In 1913, Theodore Roosevelt was the first 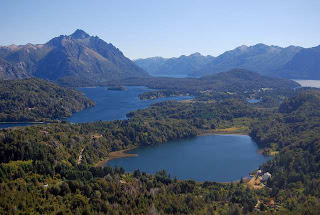 U.S. president to visit San Carlos de Bariloche - which he described as “a real frontier village” - but he wasn’t the last. In reality, T.R. was an ex-president at that time - his term had expired in March of 1909 and he lost a semi-independent “Bull Moose Party” candidacy in 1912, after which he headed to Chile and Argentina (followed by Brazil). He did, though, meet with pioneer conservationist Francisco P. Moreno, who jump-started Argentina’s national parks system with a gift of several thousand hectares that became part of Parque Nacional Nahuel Huapi (pictured here). To digress a little, Roosevelt's grandson Kermit Roosevelt Jr. was born in Buenos Aires when his father Kermit (T.R.'s son) was working at a bank there.

When Roosevelt went to Argentina, though, he couldn’t have stayed at the Hotel Llao Llao, architect Alejandro Bustillo’s Euro-Andean masterpiece 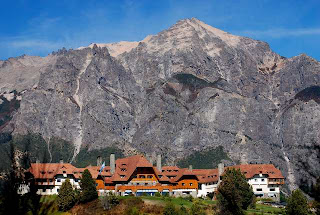 , which I revisited recently (I didn’t stay there, as the Llao Llao’s rates are well beyond my budget). While there I noticed a photograph of Argentine president Arturo Frondizi, who was hosting U.S. President Dwight D. Eisenhower at the Llao Llao in February of 1960. According to the New York Times of February 29, 1960, “Ike” tired himself out by fly-fishing - press secretary James Haggerty rhetorically asked a news conference audience “Have you ever tried fishing in a stream for two and half hours?” - and golfing on the Llao Llao’s course. Eisenhower, who was notorious for seemingly spending as much time on the fairways as in the Oval Office, could only summon enough energy to play four holes.

Later, in October of 1997, Bill Clinton was a guest of then Argentine president Carlos Menem at the Llao Llao and dined at the grill restaurant El Patacón, which prominently displays photos of Clinton and current president Barack Obama’s Secretary of State (who happens to be Clinton’s wife).

Perhaps the most memorable thing to come out of Clinton’s visit, though, was a piece that appeared in the satirical newspaper The Onion a few months later. Don't miss it.
Posted by Wayne Bernhardson at 5:30 AM

Glad you enjoyed our neighborhood. Clinton's visit also got broadband internet to Llao Llao, something we greatful for, even today.