For four nights, in 1952, Ernesto Guevara Lynch and his buddy Alberto Granados crashed on hay bales 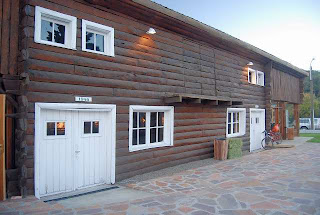 in the national parks barn in the city of San Martín de los Andes, in Neuquén province. This was the trip that led to the book now immortalized in the film The Motorcycle Diaries, during which Guevara and Granados traveled as gasoleros - a modern Argentine slang term that means doing as much as possible as cheaply as possible. The term derives from “gas-oil,” as Argentines call diesel fuel, which is much cheaper than gasoline here.

And that, apparently, is reason enough to turn the barn into an interactive museum, with assistance from Cuba’s Instituto de Estudios Che Guevara, complete with video footage of Che’s career and a shop at which it’s possible to purchase Che souvenirs, including his books and those of his admirers. The museum opened last June, and I visited it just this last Thursday.

In fact, the Museo La Pastera Che Guevara is more a shrine than a museum; neutral biographers, such as Jon Lee Anderson and Jorge Castañeda, are nowhere to be found on the shop’s shelves (you’d be about as likely to find books by Richard Dawkins alongside the Bible at an evangelical church). In fact, if there’s a museum to be founded everywhere Guevara and Granados crashed for the night, we should be prepared for a near infinity of Guevara shrines throughout the Americas. The only really credible museum of Che's life in Argentina occupies his boyhood home at Alta Gracia, in Córdoba province.
Posted by Wayne Bernhardson at 4:34 AM

"The term derives from “gas-oil,” as Argentines call diesel fuel, which is much cheaper than gasoline here."

You finally answered part of my question from January! How much cheaper?

By the way, this is how it should be, as Diesel is barely refined crude oil. This is why you can run Diesels on stuff like vegetable oils and used motor oil. Diesel prices are only on-par with more refined products such as gasoline here in NA due to taxes and ULSD regulations.

How prevalent are Diesel-powered cars in the southern cone?

Chuck, I apologize for not having gotten to your question and will plead excessive time behind the wheel as an excuse. But I promise i'll get to it soon.