Watch Your Language: Mismarketing Mitsubishi in the Southern Cone

It's an apocryphal tale that, when Chevrolet branded a new model the “Nova,” 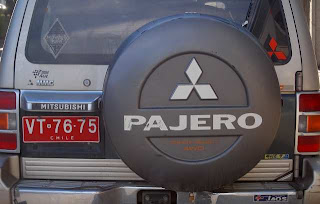 it failed in Latin America because the words “no va” meant “it doesn’t go” in Spanish. In reality, by that standard, it would have flourished in Brazil, where “nova” literally means “new” in Portuguese. In both Spanish and Portuguese, as in English, “nova” also means a star that brightens suddenly before fading.

If Chevrolet’s promotional blunder never really happened, Mitsubishi definitely made one in marketing its SUV “Pajero” in southern South America. Presumably Mitsubishi meant to market a 4WD vehicle that could conquer the Pampas and the Patagonian steppe - the Spanish word “paja” means a type of coarse bunch grass - but it didn't quite work out that way. In regional slang, “pajero” means “jerkoff” or its British equivalent “wanker.”

Several years ago, in fact, I wrecked a rented Pajero on Chile’s Carretera Austral and, despite mitigating circumstances (a blown tire), I certainly felt as if the term described me. Other Patagonian drivers are not so proud as the one of the vehicle pictured above - I’ve seen similar cars with the offending chrome lettering on the sides removed, or the word painted over or scratched out.
Posted by Wayne Bernhardson at 3:52 AM