When I first visited Argentina in 1979, the country had only one coastal national 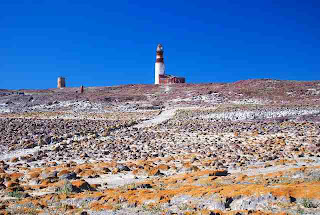 park, Parque Nacional Tierra del Fuego. Thanks to a donation from environmental philanthropist Doug Tompkins, Parque Nacional Monte León came into being in 2004, but it’s since added a new maritime coastal park in Patagonia and is due to add another that, last Monday, I managed to visit for the first time from Puerto Deseado.

The proposed Parque Nacional Isla Pingüino comprises an archipelago of small islands some 25 km off the coast, but two 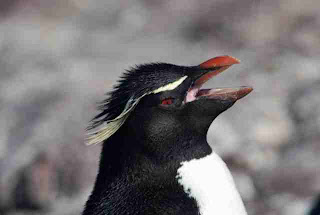 Deseado companies offer excursions with rigid inflatables that land their passengers on the small (one square km) main island (pictured above) for hikes past Magellanic penguin colonies to an abandoned lighthouse, but the real delight is the world’s northernmost rockhopper penguin colony (see the accompanying portrait), about 500 breeding pairs on the side facing the open South Atlantic. The next nearest rockhopper colonies, to my knowledge, are those in the Falkland Islands, several hundred miles to the southeast.

In addition to its rockhoppers, Isla Pingüinos has about ten to twelve thousands pairs of Magellanics and, here and on smaller offshore islands and rocks, some 2,000 southern sea lions. The Magellanics are a particularly interesting case because on the mainland they breed in burrows, but on rocky Isla Pingüinos there’s little soil that they can excavate for their nests. Thus their nests are in the open, and this means high mortality rates, as predators such as great skuas can pick off eggs and even small chicks.

En route to the island, we also saw a vagrant group of southern fur seals camped out on a rock. On the way back to Puerto Deseado, we witnessed, up close, a feeding frenzy by black-browed albatrosses, several species of cormorants, skuas, sea lions, and Commerson’s dolphins as a bright silver school of sardines moved through the water like an oil slick.

I went to Isla Pingüinos with Expediciones Darwin, but Los Vikingos also offers trips to the island between September (when the birds start to arrive) and April (when the last stragglers head out to sea). Both companies offer more info and photos on their websites.
Posted by Wayne Bernhardson at 5:11 AM