To Argentines, all Scandinavians are vikingos (Vikings), 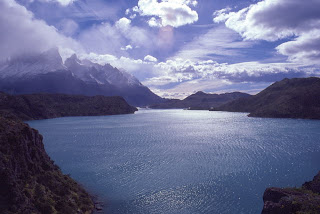 and the term is not always descriptive - it’s sometimes a synonym for “slob,” presumably for the historic Vikings’ dubious table manners. As a vikingo myself, with three Swedish grandparents and one Norwegian, I’m well aware of this, as my Argentine wife uses the term - only semi-facetiously - when she’s upset with me.

In reality, though, Scandinavians have played a notable, if small, role in Argentine history. Two of the most distinctive churches in Buenos Aires are San Telmo’s Dansk Kirke (Danish Church) and Svenska Kyrkan (Swedish Church), and both the Danish and Swedish clubs have their own restaurants in the city. In southern Buenos Aires province, the beach resort of Necochea has its own Danish consul, and many vehicles sport “DK” decals on their bumpers.

In 1902, the Argentine navy’s corvette Uruguay (now docked at Buenos Aires’s Puerto Madero and converted into a museum) rescued stranded Swedish Antarctic explorer Otto Nordenskjöld and his crew, who spent two years stranded on the frozen continent. Nordenskjöld also explored Patagonia, including the area around Chile’s Torres del Paine, where one of the park’s largest lakes (pictured above) bears his name. 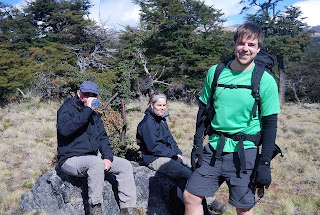 to the scenic overlook at Loma del Pliegue Tumbado near El Chaltén (Argentina), I met Nordenskjöld’s great-grandson Joel (pictured here, with two other Swedes), who is paying a second visit to the region (the first was in 2002, when he went to Antarctica with 16 other Nordenskjölds on the centennial of Otto’s rescue by the Argentines). In the coming days, as his group hikes the “W” route in Paine, Joel Nordenskjöld has pledged to take a swim in the frigid waters of the lake named for his great-grandfather.
Posted by Wayne Bernhardson at 5:06 AM

I am well aware of the Danish influence here in Necochea, but it was interesting to read about the exploits of vikingos in other parts of the country.

If you're ever in Necochea for the Festival de Colectividades, I highly recommend that you visit the food stall run by the Danes. Delicious! ;)

Or even close calls. I remember reading George Vancouver's journals where he sailed up to Bella Coola in what is now British Columbia, and found inscribed on a rock mere days before Alexander MacKenzie's name. They had missed each other by moments in the scale of their adventures, one across all of North America by foot, the other under sail around the globe. Earlier on the voyage Vancouver had climbed out on the bowsprit on their southernmost tack around Antarctica to grab the claim of ne plus ultra up until 100+ years later when men such as Nordenskjöld started exploring that continent.

this is so cool!
I'm from Buenos Aires and my dad and I are planning a trip to Patagonia in January, so I started looking up what to do and stuff, and since I'm in love with Danish culture and vikings, I looked that up too. Love this story!