Ever since spending a year in the Falkland Islands in 1986-7, I’ve 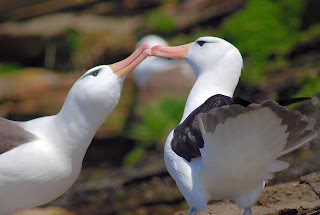 considered myself privileged to have done so. I was even fortunate enough to circumnavigate the Islands on the freighter Monsunen, which used to pick up the wool clip on offshore farms, and was able to visit some truly remote areas.

In reality, the Islands are a sub-Antarctic Galápagos, with abundant wildlife that’s remarkably tame - sit down near a black-browed albatross colony on Saunders Island, for instance, and the birds will come waddling up to you. Of course, at 52° S latitude, the Falklands lack the species diversity to be found in the tropical Galápagos, but it makes up for that in sheer numbers of Magellanic, Gentoo, king, and rockhopper 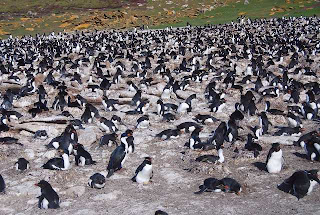 penguins (pictured here in a mixed colony with king cormorants), steamer ducks, albatrosses, upland geese, and many more birds, not to mention marine mammals such as sea lions and elephant seals. That’s one of the reason the islands have become so popular with cruise ships, and a recent survey carried out by Falkland Islands Tourism supports the economic impact of tourism here.

I’ve seen that myself, as I’ve been in Stanley 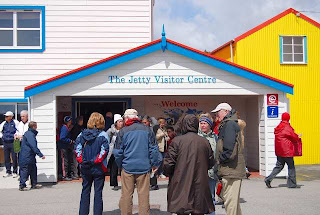 on a day when 4,000 cruise shippers overwhelmed the 2,000 or so inhabitants of the Falklands’ capital, but the economic statistics are interesting. Over the season, which starts around October and ends in March, the cruisers spent more than £3 million (US$4.35 million), which comes out to roughly US$1,550 for every resident on the islands (this includes those living in camp, as the countryside is known there).

In the recent season, there were about 60,000 visitors. Most of the spending came for tours to destinations such as Gypsy Cove and Bluff Cove, but shopping and food and drink also accounted for substantial expenditures.

Another interesting fact that came up is overwhelming visitor satisfaction with the Islands. More than half the 377 interviewees said they would be interesting in returning to the Islands for a land-based trip, which would mean longer stays but would probably also require more flights from mainland South America. At present there is only one weekly flight from Punta Arenas, Chile, with LAN Airlines, as Argentina prohibits any additional flights over its airspace.
Posted by Wayne Bernhardson at 6:45 PM

Wayne, there isn't a single flight to the Falklands that originates in Argentina? I know the Argentines are sensitive about the Malvinas, but that is very surprising.

One flight a month from Punta Arenas stops in Rio Gallegos on the way to the Falklands, and stops there on the way back the following week. Argentina would give permission for flights originating in Argentine territory, but the Islanders would not accept that.