From my viewpoint, the most succinct summary ever of soccer came from a Buenos Aires Herald article 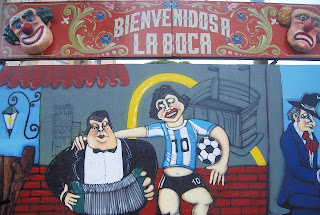 whose headline is pinned to the bookshelf above my desk: "Another Boring 0-0 Tie." Those of us who grew up with baseball, basketball, and football (sorry, soccer fans) cannot tolerate tie games - especially scoreless ties. At the same, it bewilders me that anybody can get violently upset at a soccer game, unless of course they're furious that they've been scammed with another no-result outcome that they paid presumably good money to watch.

Argentina is particularly infamous for soccer violence, though, and I'm well aware that the situation is more complex than my facetious comments above. For one thing, the country's so-called barras bravas (soccer hooligans, in British terminology) are organized gangs that are often in league with club ownership, who give them free tickets and even pay their travel expenses to road matches.

That's why it was so interesting to read a Reuter's dispatch of a proposal by the Asociación de Fútbol Argentina (AFA, Argentina Soccer Association) to create a high-tech deterrent to soccer thugs that will include biometric scanners and electronic cards with personal information as a requirement to attend a soccer match. According to the Reuter’s translation of the AFA's proposal, "Anyone who wants to go to a soccer stadium must be registered on a database and possess a magnetic card which includes their name, photo, document number, and fingerprints." The article also points out that, given the crumbling state of many Argentine soccer stadiums, it's hard to imagine teams implementing such a high-tech solution with any success.

What goes unmentioned is how this might affect foreign soccer fans, many of whom come to enjoy what, by acclaim, is some of the world's best soccer. How is, say, a French or German visitor supposed to obtain the obligatory ID simply to watch the latest Boca-River "superclásico" during a short stay in Buenos Aires en route to Patagonia?

Certainly improved security is essential for Argentine soccer, but one should be skeptical that the AFA's efforts will be any more productive than those of the notoriously inept Department of Homeland Security.
Posted by Wayne Bernhardson at 7:09 AM

That assumes that DHS is an efficient bureaucracy, which it is anything but in truth. They always propose these goofy "high-tech" schemes but could never implement them in any meaningful way.

Chuck, I meant the original comment ironically, but have edited it to reflect that reality more clearly.