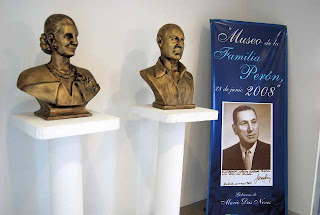 Juan Domingo Perón, famously said that “Peronists are neither good nor bad, but incorrigible.” I tend to agree with Borges’ assessment of a political party whose leaders’ motto always seems to be “If you’re not with us, you’re against us.” At the same time I’ll admit to being impressed with the new Museo de la Familia Perón, which I visited last Thursday, in the Patagonian town of Camarones.

There are, to my knowledge, two other Perón museums in Argentina: at Juan Perón’s birthplace in the Buenos Aires province town of Lobos, and the Museo Evita in the Buenos Aires city neighborhood of Palermo (barely two blocks from our apartment). The former is surprisingly bland, while the latter is an uncritical homage to Perón’s first lady that’s more interesting for where it is (a mansion that Evita turned into a home for unwed mothers from the provinces, scandalizing the neighbors in what was then an elite neighborhood).

Camarones’ Perón museum occupies a shiny new replica of the caudillo’s boyhood home - his father, Tomás Perón, ran a sheep estancia on the town’s western outskirts in the early years of the 20th century (Juan Domingo Perón was born in 1895). It differs from the other Perón museums not in that it’s professionally organized - so is the Evita museum - but in that it admits that Perón was a controversial and contradictory figure whose loyalists even engaged each other in firefights in the 1970s (right- and left-wing factions were each convinced the general was on their side).

While the museum leans toward the interpretations of Argentina’s current left-of-center Peronists, it avoids the polemics so common in Argentine politics. Not only that, the English translations that accompany the exhibits are well above average. For anyone visiting the wildlife routes of coastal Chubut province - Camarones is only a short distance from the Cabo Dos Bahías reserve - the Perón museum deserves a stopover.
Posted by Wayne Bernhardson at 4:35 AM