For the first time since the eruption of Volcán Chaitén in May 2008, I was able to visit the Chilean town 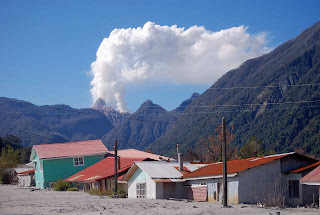 of Chaitén - or what remains of it - this past Wednesday. While I stayed in Futaleufú, the renowned whitewater kayaking and rafting mecca on its namesake Río Futaleufú near the Argentine border, I drove the roughly 160 km (100 miles) to Chaitén and spent about three hours in town before returning to Futaleufú. At El Amarillo, about 25 km south of Chaitén, the Carabineros police check passports and ask where you’re going and what you’re doing, but there are no restrictions on travel to town, and several hotels and simpler lodgings remain open. Ferry services continue to operate to Quellón and Puerto Montt. 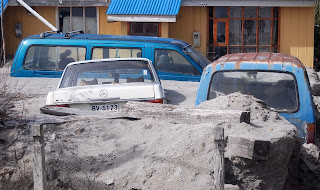 of town - and the volcano is still steaming ominously only ten km (six miles) to the north - but the reality is a little more complex than most of the reports I’ve read would suggest. Some parts of town suffered relatively little damage, and a handful of residents have returned and cleaned them up.

According to the 2002 census, the town had slightly more than 4,000 residents; I’ve heard that anywhere from 50 to 200 have returned. Nicholas La Penna, who operates the travel agency Chaitur and also runs the bus terminal, tells me that it’s hard to estimate, because people come and go; many of them have second houses or cabins in the surrounding countryside.

These are the people the Chilean press are calling rebeldes (rebels), 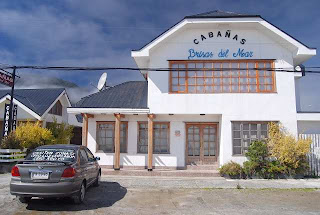 who refuse to honor the government’s edict to abandon town (there are tentative plans to rebuild in a more secure location about ten km to the northwest). The government did a brilliant job of evacuating the town without fatalities - compare it to the U.S. government’s mishandling of New Orleans during Hurricane Katrina - but its post-eruption response has been more controversial. There’s been little official effort to clean things up, and signs around town complain of abandonment. The sign on the car window here in front of the tidy Cabañas Brisas del Mar (which is open for business) says “Chaitén Zone Zero - Zero Light, Zero Water, Zero Assistance.”

That’s not quite fair. There is no running water, but the government has, for instance, 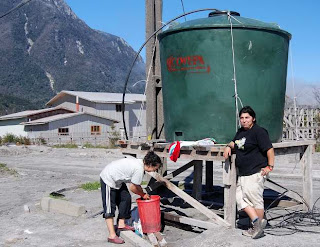 placed several large tanks of potable water that residents can also use for washing clothes, as the women in the photograph here are doing. Yet it’s true that there’s no public electricity, and the government has applied pressure to get everyone to leave. Those who’ve remained are finding it difficult to get fuel for their generators since, after another eruption last month, the gas station was shut down.

It’s hard not to sympathize with displaced residents who want to return home, yet if the government did provide services to those who’ve restored their properties, they’d probably be faced with demands to rebuild the rest of the town on such a precarious site. And the volcano is still smoldering just beyond the town limits.

It’s worth adding, meanwhile, that the town of Futaleufú and its world-class river have remained completely open for business. Ash fell on the town during the original eruption, but to my eyes there’s been little lingering effect except on the tributary Río Espolón, a starter river that received a much larger ash fall. Unfortunately, the publicity from the Chaitén eruption appears to have deterred some long-distance paddlers from spending the summer on the “Fu.”
Posted by Wayne Bernhardson at 6:28 AM

hello Wayne! i concur with your analysis on chaiten.

hello Wayne - i concur with your analysis on chaiten.