The Not So Bad - and the Good - from Santiago

Last Sunday, I drove from Mendoza (Argentina) to 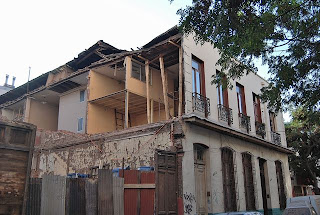 Santiago de Chile, a slower trip than I anticipated but not because of earthquake damage - rather, on the Chilean side of the Libertadores border crossing, there’s a great deal of overdue roadwork going on. Nevertheless, the crossing itself was smooth and, until I approached Santiago from the north on smoothly paved Ruta 57, there was no sign whatsoever of damage.

The main damage was to part of the roadway - in a couple places, bridges were slightly displaced and a detour reduced traffic to two lanes. Most notable was the collapse of segments or more of several pedestrian overpasses that crossed the freeway, but the main roads themselves are on balance in good condition. Fortunately, when the quake hit at about 3:30 a.m. on February 27, few cars were on the road and nobody, apparently, on the overpasses.

During my three days in Santiago, I stayed in Barrio Brasil, where walls had tumbled from several adobe structures, most notably those with vacant lots alongside them - in previous quakes, such buildings supported each other but, with no additional reinforcement, many walls have collapsed. Many of these buildings are beyond repair, and you can see into some of them as if they were dollhouses with cutaways. On the night of my arrival, a brief blackout brought people out of their houses 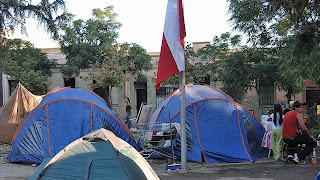 and apartments onto the sidewalk, but only to chat in an atmosphere of utter calm.

In adjacent Barrio Yungay, some families are still camping in the parks, as the apparently solid exteriors of some buildings disguise precarious interior walls. In many locations, police tape marks places where too close an approach is inadvisable. The last big quake, in 1985, had its epicenter near the coastal city of Viña del Mar, but damaged 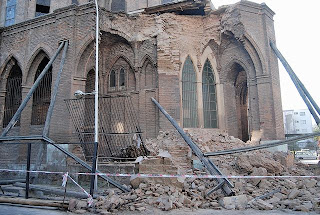 structures such as the Basílica del Salvador (pictured here), which the Catholic church had delayed repairing in hopes of getting a government bailout, is in imminent danger of collapse. The best-case scenario here would be to dismantle most of the building and leave the ruins as an historical monument - much as happened with many colonial churches in Antigua, Guatemala’s colonial capital that is now the country’s top tourist destination (Barrio Brasil’s Basílica dates only from 1892, however).

Despite the visible damage, there are many positive signs in the capital. One of the highlights of my stay was a visit to the destination restaurant Zully, where owner Joe Westrate (a Michigander married to a Chilean) has recently acquired an adjacent mansion - until recently occupied by squatters - that he intends to turn into a boutique hotel; with about 25 rooms on five floors, it includes a spectacular rooftop terrace with views of the city and the Andes. In Barrio Concha y Toro (a Barrio Brasil enclave that was home to Santiago’s early 20th-century elite), the building seems precarious now - the flashlight tour that I took with Joe made me happy I hadn’t been there during the big one - but its potential is enormous.

With all the focus on the quake and its aftermath, other significant happenings have also gone unnoticed. Only two months 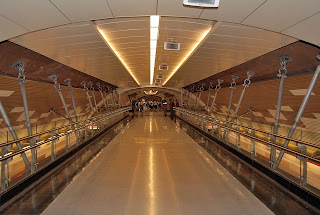 ago, on the Metro’s oldest line (dating from 1976), a three-station extension has opened, including the gleaming Estación Manquehue (pictured here). Enzo Paci, of the hop-on, hop-off tour company Pachamama by Bus, told me he sent a group south from Santiago that spent the night in the surfing capital of Pichilemu, which was relatively untouched by the tsunami despite its proximity to the quake’s epicenter.

Early Wednesday morning, my cab ride to the capital’s 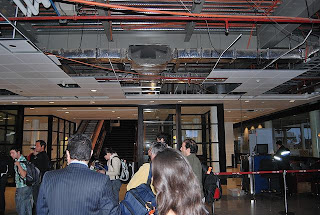 Aeropuerto Internacional Arturo Merino Benítez was utterly uneventful - though we saw one freeway bridge that had been displaced by about a foot. With the main international terminal building still closed - when the quake broke windows, it also set off sprinklers that caused water damage - the check-in was nevertheless quick and efficient. Concessionaires have set up in big tents outside the domestic terminal, where all passengers now depart from. Despite many missing acoustic tiles in the ceilings, everything was routine, my flight for Buenos Aires left on time, and the undamaged runways were so smooth I was hardly aware that we had lifted off.
Posted by Wayne Bernhardson at 3:43 AM

Thank you for the compliment.