I’m not a car guy, but whenever I visit Uruguay I’m always on the lookout for the classic cars known here as cachilas - at one time, the greatest assortment of antique automobiles this side of Havana. Once common on the road, now mostly parked to attract attention outside the fancier restaurants in Colonia del Sacramento or confined to private collections, they are only rarely taken out for a drive. Many have been sold to collectors outside the country, despite export restrictions.

Yesterday, in search of cachilas I hadn’t seen, I took a walk to the 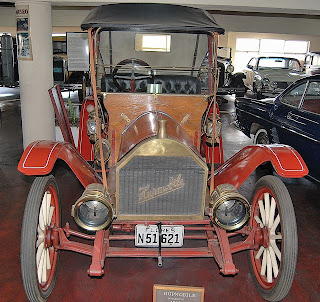 Automóvil Club Uruguayo’s Museo del Automóvil in the capital of Montevideo. In the course of many visits to the city, I had inexplicably failed to see it - part of that failure I can ascribe to inconvenient hours and weekend trips when it was closed - but I was pleasantly surprised to find an assortment of motor vehicles that I knew only by name - such as a 1910 Hupmobile (pictured here) and a 1920 Stutz Bearcat. There were also some I’d never heard of, such as a 1904 Clement Bayard, a 1910 Panhard Levassor, and a 1967 Rago - a rarely produced Uruguayan sub-sub-compact.

Perhaps the most memorable item in the museum, though, was a vehicle (pictured here) 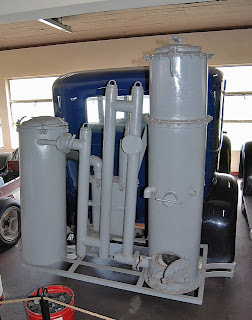 outfitted to run on the "alternative fuel" of charcoal rather than gasoline in the 1940s. Uruguay has always had energy problems - unlike neighboring Argentina and Brazil, it has neither oil nor natural gas - and during World War II petroleum supplies were limited indeed. Uruguay's dilemma is a reminder that, in a world where fossil fuel supplies are declining and political problems can limit access to those that still exist, we need to look beyond the age of oil.

On the sixth floor of the Automóvil Club’s downtown parking garage, the museum 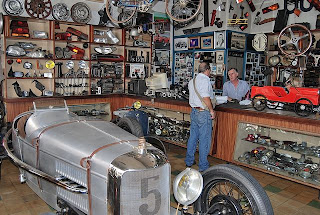 clearly gets few visitors - you need to sound a buzzer to get in - and there’s one solitary staff member who provides loving maintenance to every vehicle on the floor, all of which are still in running order. There’s still a cottage industry in restoring these vehicles and those who are interested can see some of the parts in the nearby Casa López (pictured here, at Cerro Largo 1259), which also sports a classic Ford racing car from the 1930s in its showroom.
Posted by Wayne Bernhardson at 5:25 AM

I AM a car guy and appreciate you sharing these discoveries. History says that a lot of valuable cars, both road and racing, made their way to the southern cone during the two wars that ravaged Europe during the early 20th century. Those, in addition to the cars that were imported and built there means there should be plenty of things for a car guy to see and do other than a pilgrimage to Fangio-related sites.

Chuck, I've since added a paragraph and a photograph that may interest you.