It’s been a frigid winter in Argentina, from the tip of Tierra del Fuego to the northern border with Bolivia - even at subtropical Iguazú, tonight’s temperature will bottom out around 41° F (5° C). Toward the end of the week, though, there’ll be a warming trend and, for the rest of the winter, the climate should be ideal for one of my favorite road trips: the roughly 500-km (300-mile) triangle from the northwestern colonial city of Salta and back via the polychrome Quebrada de Cafayate and its high desert wine country, the scenic Calchaquíes valley hamlets of Molinos and Cachi, and the vertiginous zigzag descent through the Quebrada de Escoipe. 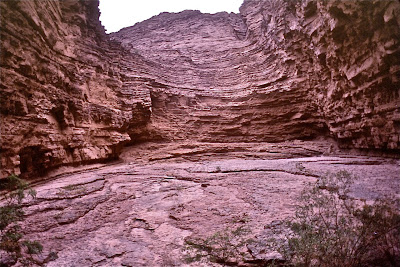 Because it’s a circuit, this route is ideal for a rental car or, for those with more time and energy, a bicycle. Southbound from Salta, the smoothly paved road climbs slowly but steadily through the lush Lerma valley but becomes far more scenic when it crosses into the valley of the Río de las Conchas, otherwise known as the Quebrada de Cafayate. Here, the Sierra de Carahuasi reveals a series of free-standing landforms, box canyons (pictured above) and dunes reminiscent of southern Utah or northern New Mexico - not to mention “gauchos de Güemes” (pictured below) with the oversized, stiff leather chaps that protect them from the thorny backcountry brush. It’s roughly a three-hour drive to the town of Cafayate but, with stops to explore the scenery and take photographs, figure a late afternoon or early evening arrival. 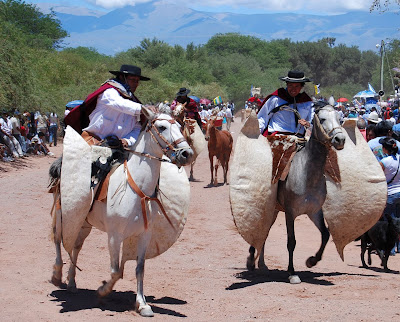 With a population of about 10,000, Cafayate is the hub of one of the world’s highest wine-growing districts - at 1,660 meters (5,446 feet) above sea level, it enjoys warm days and cool nights that bring its grapes, most notably the fruity white Torrontés, to a perfect maturity. At this time of the year, of course, the vines stand leafless as pruning and other vineyard activities proceed, but by next month they’ll start leafing out - even in some nearby vineyards that are nearly a thousand meters higher. 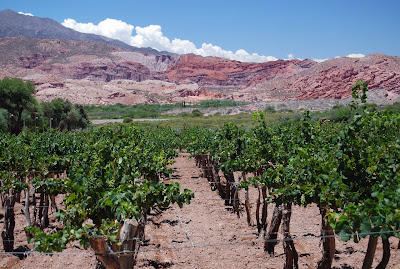 While the vineyards may be dormant, the wineries are not, and Cafayate has more than half a dozen of them within staggering distance of each other - there is no need or excuse for a DUI here. On top of that, the traffic moves more slowly and cautiously, in town at least, than it does elsewhere in Argentina, so even slightly tipply pedestrians are safer than they might normally expect among some of South America’s worst drivers. 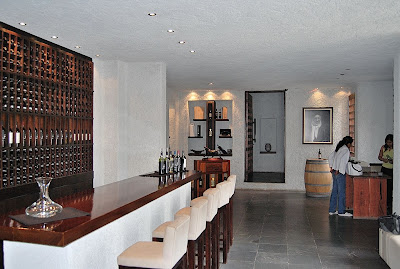 Calafate has seven wineries in town proper, and another three are within cycling distance; in some cases, as with Bodega Nanni and Bodega El Tránsito (pictured above), they’re literally right across the street from each other. My current favorite is the Pequeña Bodega Salvador Figueroa, a Lilliputian locale producing only 2,500 bottles of classic Malbec, 2,500 of oaked Malbec, and 600 bottles of Torrontés per annum. Most of them offer free tours and tasting though, in a few cases, there’s a token charge. 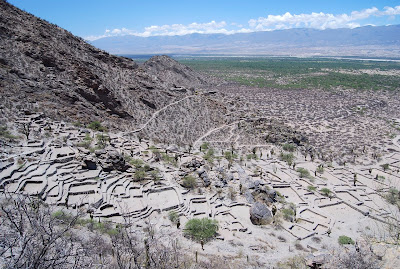 When you tire of tasting, one of Argentina’s most impressive archaeological sites is only half an hour’s drive south: the ruins of Quilmes, in Tucumán province (pictured above), are the closest thing to Machu Picchu to be found in Argentine territory. It’s best to stay in Cafayate, though; a two-night stay should suffice to visit the ruins and most if not all of the wineries. A personal favorite for accommodations is Hotel Killa Cafayate, just a couple blocks off the main plaza, but Villa Vicuña is also very fine and, for luxury, there’s the Sheraton-owned Hotel Patios de Cafayate (pictured below), on the grounds of Bodega El Esteco at the north end of town. 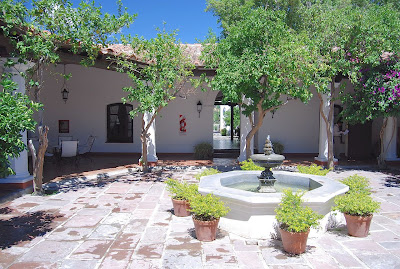 For those who have never dined on llama steak before, downtown’s Macacha (Avenida Güemes Norte 28) is the place to do so. Nearby Heladería Miranda offers wine-flavored ice cream - the fruity white Torrontés tops the red Cabernet (sadly, says the owner, Malbec grapes do not make good ice cream).

Within a few days, look for the rest of this backroads tour, covering the more rugged sector up the Calchaquíes valley to Molinos and Cachi, and then back to Salta.
Posted by Wayne Bernhardson at 10:56 AM

Hi,
I was very encouraged to find this site. I wanted to thank you for this special read. I definitely savored every little bit of it and I have you bookmarked to check out new stuff you post.

Thanks!
Rent a Car en Salta