In the restaurants of Buenos Aires's trendy Palermo neighborhood, the table staff are more often than not youthful, and can be either male or female. Traditionally, though, the occupation of mozo (waiter) is both male and professional, especially in the city’s classic cafés. For these men, waiting on tables is not just a temporary expedient but rather a lifetime calling - or recalling, according to a study by researchers at the Instituto de Neurología Cognitiva (INECO, Institute of Cognitive Neurology), the Universidad Favaloro’s Instituto de Neurociencias (Institute of Neurosciences), and the Cambridge-affiliated MRC Cognition and Brain Sciences Unit. 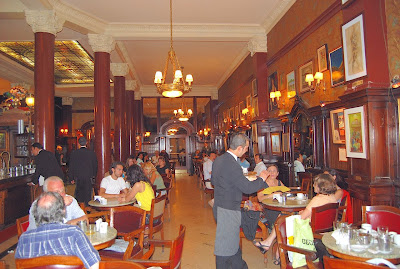 That’s because, in an experiment that required them to spend many hours in those cafes - which, as porteños, they might well have done anyway - they discovered that the waiters at Café Tortoni (pictured above), the Confitería Ideal, El Gato Negro and other landmark cafes have cultivated the skill to “memorize all the orders from respective clients and take the orders without written support of as many as ten persons per table. They also deliver the order to each and every one of the customers who ordered it without asking or checking.” This they call the "Tortoni Effect," after the city's iconic café.

Apparently, the waiters made use of both spatial and visual cues when committing the orders to memory, but their performance suffered somewhat when the researchers attempted to confuse them by switching places at the table. When interviewed (after being informed of the experiment, which could not have worked otherwise), one of the waiters remarked that “I’ve been doing this for 35 years and have never written anything down. Besides, if there are a lot of people and it’s busy you just don’t have time to write down notes. The most practical thing is to memorize, it’s a way to work.” One of the youngest subjects, a 25-year-old, told the researchers that “It’s unnecessary to write anything down, unless you have to handle 20 tables. But up to 12 or 13 I handle well…In a year or so, you can do it.”

The researchers concluded, nevertheless, that it takes up to nine years to acquire the mnemonic skills to work as a waiter here - and that this is something that does not occur in other countries with a café tradition, including France, Italy and Spain. According to another waiter, “It’s matter of concentrating on your work. And the years of experience help.” It’s not that often that Argentines are complimented for their work ethic and service, but the beneficiaries, in this case, are the locals and visitors who frequent the city’s cafes.
Posted by Wayne Bernhardson at 5:41 PM

I've always been amazed - amazed! - at the veteran waiters in Buenos Aires and the fact that they never write anything down. I bet their brains expand from all the exercise, just as those of London cabbies do when they're forced to memorize every street in their city.

Nice to hear from you again, Layne.

Dr Facundo Manes,argentinean neurosciencetist,lead this study after he visited Tortonis Cafe in company of nine other sciencetist from different countries and they noticed that waiter didn't write the order...amazing.!!!