According to the Buenos Aires daily Clarín, the city airport Aeroparque Jorge Newbery will soon be closing for repairs for nearly a month, from early November until December. In that period, all domestic flights as well as the usual international flights will operate out of Aeropuerto Internacional Ministro Pistarini (pictured here), popularly known as "Ezeiza" after the suburb in which it is located. 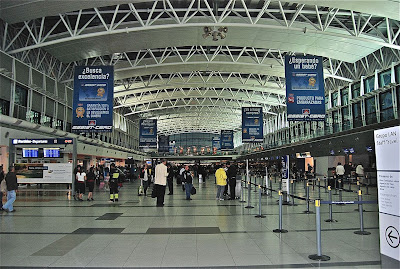 In some ways, this will be more convenient for foreign travelers making immediate connections for destinations elsewhere in the country, who will not have to undertake the cross-town trek to Aeroparque - rather, they will just be able to wait for their connecting flight. On the other hand, for those spending at least a night in Buenos Aires, it will be notably less convenient and more expensive - instead of catching a cheap taxi to close-in Aeroparque, they will have to take a more expensive taxi/remise or a shuttle service, such as Manuel Tienda León. This will also require leaving earlier than otherwise, as the taxi or shuttle, in turn, will have to navigate heavy freeway traffic, especially if the departure time is anywhere near rush hour.

In another sense, arriving at Ezeiza could be even more expensive, at least for some nationalities. At the end of last year, Argentina instituted a so-called tasa de reciprocidad (“reciprocity fee”) for nationals of countries, such as the United States (US$140), Canada (US$70), and Australia (US$100), that require similar fees from Argentine visa applicants (Argentina does not, however, require US citizens, Canadians and Australians to obtain advance visas).

The hitch here is that the “reciprocity fee” is, at present, collected only at Ezeiza and not at Aeroparque. While all intercontinental flights land at Ezeiza, many regional flights from Brazil, Chile and Uruguay normally land at Aeroparque, where nationals of the countries in question are not required to pay the fee. If flying from, say, Santiago de Chile, passengers with “qualifying” passports should be ready to fork over those fees in November. That said, for Americans and Australians, at least, the fee is valid for ten years; for Canadians it only earns a single entry.

Events Update
This coming week, I will wind up my tour promoting Moon Handbooks Argentina with two events in Chicago: Tuesday evening with a dinner meeting at the Adventurers Club, under the auspices of the Geographic Society of Chicago, and Wednesday afternoon at the Chicago Cultural Center, also with the sponsorship of the Geographic Society.
Posted by Wayne Bernhardson at 8:51 AM

Ah, the luxury for us Brits of no entry fee...!

The putative relocation of flights does sound like it will highlight the dog's breakfast of entry fees. I just met an Aussie guy who came overland into Argentina specifically to avoid the effective airport tax.

Let's hope reason prevails and these punitive, and political, entry fees are consigned to the waste bin. It surely doesn't help the Argentine economy to quick-fix a few hundred pesos in this way.

Good piece of information. I expect to fly into BA domestically from Mendoza or Cordoba, after crossing by land from Chile (to which I paid the reciprocity fee last year).

There's no chance I would have to pay the Argentinian reciprocity fee, right?

No, Andrew, not if you're on a domestic rather than international flight. The fee is not (yet, at least) collected at land borders.