From the Epicenter: Chile, One Year Later

For the last ten days or so, since sending off the finished manuscript of Moon Handbooks Patagonia, I’ve been slowly working my way through the area affected by the massive Chilean earthquake of February 27, 2010. I managed a brief visit to Santiago a couple weeks after the quake, but was unable to visit the area in and around the offshore epicenter, which was 105 km NNE of the city of Concepción, and 105 km WSW of the city of Talca.

Last week in Concepción, though, I visited my longtime friend Rolando Rodríguez, who was shaken awake at 3:34 a.m. on the day of the quake and, after the shaking stopped, went immediately to turn off the gas in his solid middle-class home; it suffered no structural damage and was beyond the area affected by the tsunami that hit the nearby port of Talcahuano. Some things were thrown from their shelves and, in the ensuing days, he and his wife lacked electricity, water and food, which were only available through emergency services. They and their neighbors, meanwhile, kept a watch for potential looters, as rumors were running wild - in fact, though there was some looting of supermarkets and other businesses, there were no mobs of looters in residential areas. “We were watching out for something that didn’t exist,” he said. 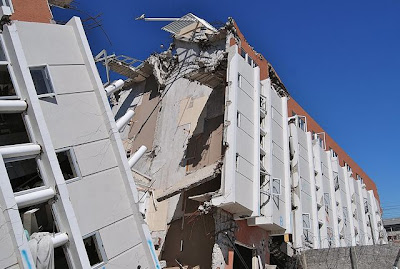 Rolando’s friend and fellow CONAF employee Jaime Verdugo was not so lucky - but in a sense, even luckier. He was in his eighth floor condominium in the Alto Río building, which he bought for its views over the Río Biobío and its convenience to his downtown workplace, when the quake hit. Thrown into a closet, he stayed there as the building separated from its base and tumbled backwards; had he been on the opposite side, he would have been crushed - as were nine other residents - but, astonishingly, he survived even as the building toppled and split apart between the fifth and sixth floors. Anticipating a tsunami, he decided to stay put but then, scenting a natural gas leak, he left the closet and managed to flag down emergency workers who pulled him out of the building’s ruins (pictured above) 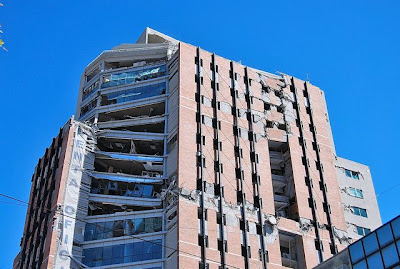 Meanwhile, only a few blocks away, the 15-story Torre O’Higgins (pictured above) still stands despite its sagging upper floors because, according to the Ministerio de Obras Públicas (Public Works Ministry), it needs to be stabilized before it can be demolished. That’s due to take place by July but, in the interim, I wouldn’t want to be anywhere in the vicinity if another quake happened. Ironically, the banners offering offices for sale still hang from its sides. 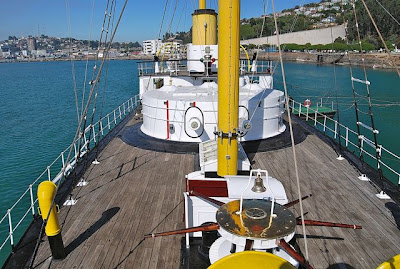 All that said, despite a few vacant lots where lies a bit of rubble, Concepción has pretty much returned to normal. The same was true in Angol, Chillán and Valdivia, the other cities I’ve seen en route - only minor damage is still apparent, except in Talcahuano, where the brunt of the tsunami hit and even knocked the historic Peruvian ironclad Huáscar up against the docks (pictured above, it’s since been repaired). That said, even the vulnerable Talcahuano waterfront is getting a major upgrade.

All this raises the question, though, of comparisons between the Chilean earthquake (8.8 on the Richter scale) and the recent, larger quake in Japan (9.0 on the Richter). Both were among the largest seismic events ever recorded, but the Japanese quake has killed far more people - perhaps upwards of 10,000, compared with 500-plus in Chile. Leaving aside the issue of relative damage caused by strike-slip (Chile) versus thrust fault (Japan), the big issue in human terms is Japan’s far greater population density - its population of 127 million is roughly eight times Chile’s 16 million, and the population density of 336 per square km far exceeds Chile’s 23 per square km.

Beyond Santiago, which has about six million inhabitants, Chile has no city larger than about 250,000 residents (though the Valparaíso/Viña del Mar and Concepción/San Pedro conurbations total about half a million), so the population is far more dispersed than in Japan. The destruction of low-slung adobes in towns like Talca (which I am about to visit) meant fewer fatalities.

Still, given the magnitude of the Chilean quake, the relatively minor human damage and quick recovery is a tribute to the country’s emergency services and resilience. The issue now raising its head, though, is nuclear power in a seismically vulnerable country - according to a recent survey, 86 percent of Chileans object to reactors. The highly regarded ex-president Ricardo Lagos, who originally supported nuclear-powered plants for a country with limited fossil fuel resources, has reconsidered their seismic safety in the aftermath of the Japanese experience. While public opinion surveys can be notoriously erratic in the aftermath of catastrophic events, such opposition is unlikely to disappear any time soon.
Posted by Wayne Bernhardson at 8:42 AM