The Scrap Metal Capital of the Americas 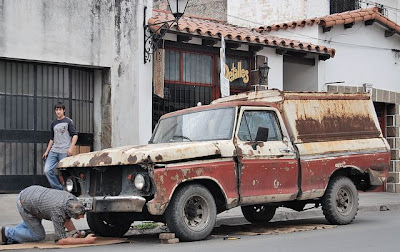 For a decade-plus now, I have owned a Nissan Terrano, a 4WD vehicle with which I explore southern South America while updating my Moon Handbooks to Argentina, Chile, Patagonia and Buenos Aires. Every November, when I return to Santiago, one of my first chores is to take it for the revisión técnica, the annual vehicle inspection that determines whether or not a Chilean car is roadworthy. This is a serious inspection, even more so than in California, where private vehicles must undergo a smog check every other year. In Chile, that smog check is annual, but that’s not everything - the technicians there also check your front-end alignment, the tread of your tires, brakes, the emergency brake, and even the alignment of your headlights. If any one of these is not up to snuff, the vehicle fails the inspection and you have two weeks to correct any problems. For that reason alone, accidents due to equipment failures are rare on Chilean highways. 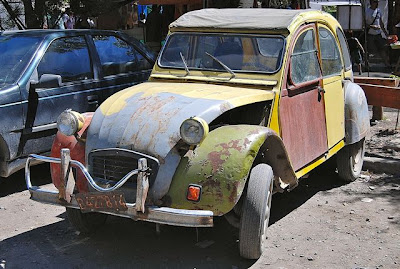 In principle Argentina has a similar system but, in reality, there are probably hundreds of thousands of unsafe vehicles that, at the same time, pollute the country’s skies. Once, near the city of Mendoza, I recall a rattletrap Fiat on the freeway with only a single parking operative parking light - no headlights or taillights at all - that was barely capable of 50 km per hour (about 30 km per hour). On a road where most vehicles were traveling at least twice that speed, the potential for a pileup with a tiny car that was barely visible was inordinately high. 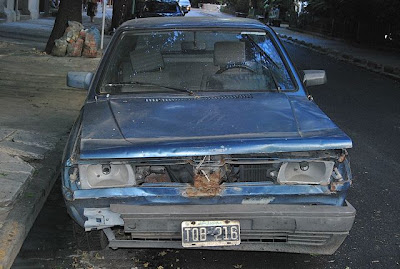 This was not an exception, though. In no other country have I seen so many obviously unroadworthy cars. When I once asked an Argentine policeman whether these cars ever get ticketed, he told me “no” - despite the frequent checkpoints along the highways, they would rarely consider pulling even a flagrantly unsafe vehicle off the road. That’s ostensibly because of their interest of maintaining “social peace” - most such vehicles belong to poorer people who need them for errands or work. The less charitable among us, though, might observe that the drivers of such vehicles are unlikely to have extra money to bribe the cops to look the other way. Neither “social peace” nor bribery is an issue in Chile, however.
Twenty-some years ago, when I wrote my first-ever guidebook to Argentina, Uruguay, and Paraguay, I traveled the Southern Cone highways and backroads in a 1969 Peugeot T4B panel truck that my wife nicknamed “Lola.” Purchased indirectly from my late father-in-law, Lola was a wreck waiting to happen and, in the course of my travels, I seemed to meet every mechanic in the Southern Cone countries just to keep it going. After doing another book on Chile the following year, we sold the car in their Buenos Aires province hometown of Olavarría and, I understand, it’s now doing duty on a ranch - its roadworthiness was always questionable but now, at least it’s one vehicle that won’t cause an accident. I photographed the Ford pickup at the top of this entry in the city of Salta at what, amazingly, is a detailing shop - like Lola, it’s a chata, a word that Argentines apply to any utilitarian pickup (in Mexican slang, the same word has some off-color meanings) . Its etymology is unclear, but it’s superficially close, at least, to chatarra, a word best translated as “scrap metal.” 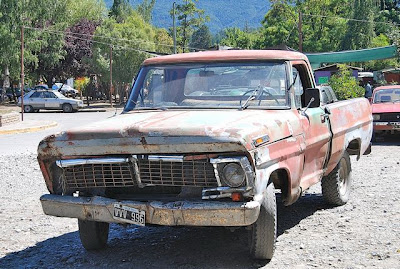 There are chatas and chatarra everywhere in Argentina, but the two really come together in El Bolsón, the northern Patagonian town renowned for its Plaza Pagano street fair (pictured below). In the parking lot behind the plaza is an extraordinary assortment of junk cars - both chatas and chatarra - that mostly, fortunately, are incapable of getting far beyond the city limits. 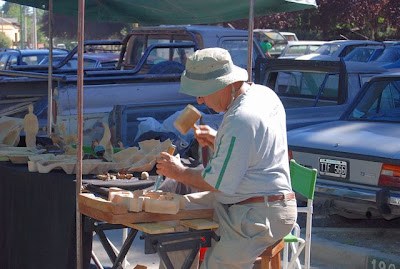 If you have found this article informative, please consider clicking on one or more of the AdSense links that accompany it - always presuming, of course, that it's a product or service that interests you.
Posted by Wayne Bernhardson at 7:44 PM

For an armchair taste of Salta and the Northwest of Argentina, try reading "The Empanada Affair", a travel and mystery novel set in the region. The book is available for $0.99 from Amazon as a Kindle E-book, or as an iBook.

From a recent review: "There is a lot of detailed information throughout the story about places (the immediate environment the characters are in) and food (the meals they're eating). On the plus side, this made for a very sunny kind of read that kind of reminded me of holidays -- you can literally see where they are, the descriptions are so good....Overall, the story is well paced and the characterization good, leading to my unexpected enjoyment of this book."