Afro Uruguay: Aspiring to the Screen

Some months ago, on this blog, I reviewed the novel Perla by Carolina de Robertis, an Oakland neighbor whom I’ve not yet met in person. Her “Dirty War” fiction, set in Argentina, is a valuable read, as is her translation of Roberto Ampuero’s The Neruda Case, but she’s just brought another intriguing project to my attention: early next year, thanks partly to a Fulbright fellowship, she and her wife Pamela Harris will be relocating to Montevideo, Uruguay, to produce a documentary film called Afro Uruguay: Forward Together, about that country’s underappreciated black community.

I’ve written peripherally about this topic myself, primarily touching on Uruguay’s Carnaval celebrations and Montevideo’s outstanding Museo del Carnaval that helps put them into context – especially for visitors who don’t have the good fortune to visit at that time of the year. I don’t pretend to have any specialist knowledge, but it’s probably fair to say that the Afro-Uruguayan heritage of candombe music and dance recalls Buenos Aires’s Afro-Argentine traditions before they were swamped by the massive European immigration of the late 19th and early 20th centuries. In the memorable phrase of historian George Reid Andrews, the Argentine capital’s black population was “forgotten, but not gone.” 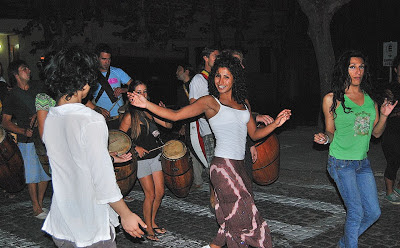 Producing a documentary is a challenging and expensive proposition, so De Robertis and Harris are seeking additional funding of US$15,000 through a Kickstarter campaign for tax-deductible pledges. With 22 days to go, they have obtained pledges of roughly US$2,000. Pledges as small at US$1 are welcome and, with the prestige of Fulbright behind it, this project has a quality pedigree. I will be submitting my own modest pledge to support this investigation of the Southern Cone’s cultural diversity, and I encourage my readers to do so as well.
Posted by Wayne Bernhardson at 1:05 PM