Pleasures of Patagonia? The Platters of Punta Arenas

From people who don’t really understand what a guidebook writer does, I often hear that I have the ideal job, spending four to five months every year “on vacation.” While I enjoy what I do, and welcome the opportunity to revisit people and places that I’ve gotten to know over the past couple decades-plus, that’s a big oversimplification. At this point, for instance, I would find it difficult to dedicate a week-plus to hiking Chile’s Paine Circuit – as I first did in 1981 when it was almost unknown – because I have to devote so much of my time in South America to basic fact-checking for upcoming editions of my books. 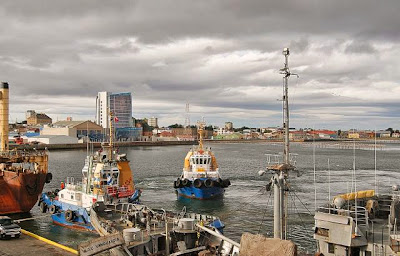 That said, at the end of the day, it’s always nice to relax with a pisco sour, a nice seafood dinner and a glass of wine, as I’ve done most of the last few days in Punta Arenas (as seen above from the Muelle Prat, where Cruceros Australis vessels dock). That’s still work, as the latest information on restaurants is part of the job, but it slows the pace and gives me a chance to reflect on the day’s accomplishments (or lack thereof) and plan for the coming day(s).

Punta Arenas is actually one of my favorite dining destinations and, after arriving Saturday afternoon on the LAN flight from the Falklands, it was a pleasure to contemplate the possibilities. Unfortunately, on a four-day stay that ended today, I was unable revisit every place I might like – I can only eat so many meals per day – but here’s a summary of what I managed to sample. 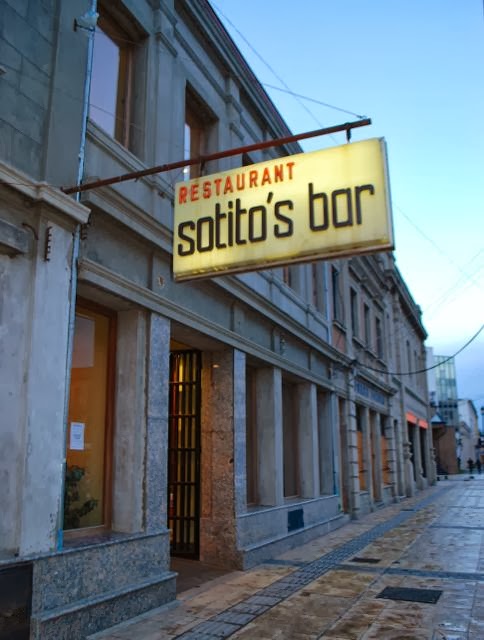 I hadn’t been to Sotito’s – whose name is misleading in that it’s a full-fledged restaurant – for several years since they had moved into large new quarters. Saturday evening at 8 p.m. (early for dinner here), I was alone in the upstairs dining room, though the downstairs was virtually full with a special event. The king crab cannelloni didn’t blow me away, but the calafate mousse for dessert was spectacular, light and flavorful but not excessively sweet. The pisco sour was a bit on the sugary side, though.

CLUB CROATA
On Sunday, I took a day trip on the Strait of Magellan ferry to the town of Porvenir on Tierra del Fuego, and lunched at the classic Croatian Club – Croats played a huge role in settling this part of Chile – and ordered a king crab lasagna which, unfortunately, was an enormous portion and heavier and creamier than I would have preferred. Next time, I’ll order grilled fish, I think, and I still love the retro ambiance.

LA LUNA
Back in Punta Arenas that evening, I didn’t feel like a full dinner, but I couldn’t resist a visit to this quirky institution, where I ordered an appetizer of ostiones al pil pil, a garlicky scallops dish that was surprisingly spicy for a country whose palate usually rejects hot peppers. Bigger portion than I expected, but it was irresistible.
LOMITO’S
Monday at lunchtime, I headed to Punta’s sandwich specialist for ave con palta (chicken with avocado). A lot of Chilean fast food is pretty bad but, if you insist they hold the mayonnaise (Chileans regularly overdose on the stuff) and split this huge sandwich, you’ll be set until dinnertime. To wash it down, choose fresh raspberry juice. 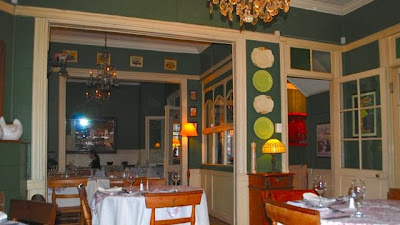 In a classic Magellanic house, Damiana Elena has become Punta’s prestige restaurant and, though nobody was there when I arrived with a friend at 8:30 p.m., it filled up quickly even on a Monday night. The menu now consists of seven or eight nightly specials; not caring to eat beef, I made an offbeat choice for sub-Antarctic Patagonia: mahimahi, flown in from subtropical Rapa Nui (Easter Island) with an onion and Carménère sauce. The dessert was more locally sourced – a rhubarb ice cream.

SUSPIRO DE LIMEÑA
After spending the morning at Fuerte Bulnes, the ruins of the region’s first Chilean settlement about an hour south of Punta Arenas, I chose this new Peruvian restaurant under the auspices of La Luna’s owners. The parihuela, a tomato-based soup embellished with king crab, scallops, shrimp, squid and octopus, was perfect for a frigid late-spring day, with chill winds off the Strait of Magellan. 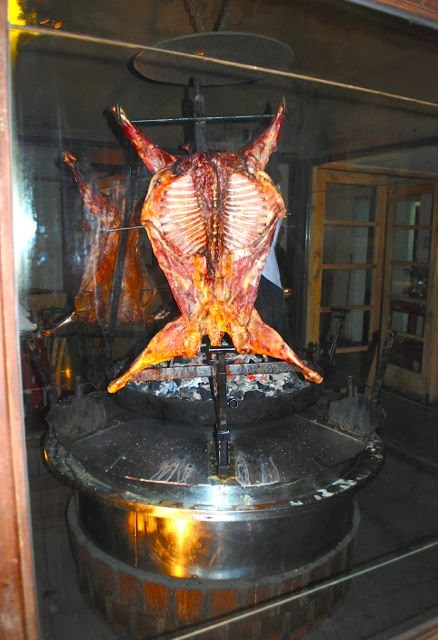 Recently merged with its sister seafood restaurant Puerto Viejo, this relocated grill specializes in Patagonian lamb (pictured above), but I chose not to overindulge myself in a large portion of meat as tempting as it sounded – though the US$30 price tag also helped make up my mind. Instead, I chose the Puerto Viejo option, a portion of merluza (hake) in a cider sauce at a third of the price. I was slightly disappointed in it, given my previous experience at both restaurants, but still would not hesitate to return for the lamb or a beef dish.

THE NEXT TIME BACK
Fewer than four full days in Punta left me unable to sample everything I might have liked, but I’ll be back, maybe even later this summer. Next on my list is El Remezón, which specializes in Patagonian game dishes. 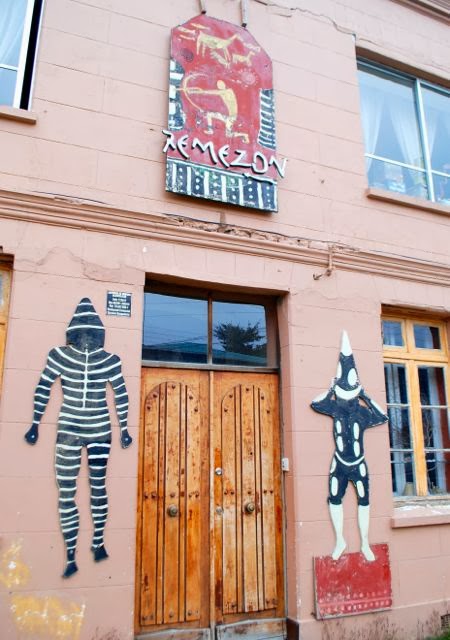 Posted by Wayne Bernhardson at 2:59 PM